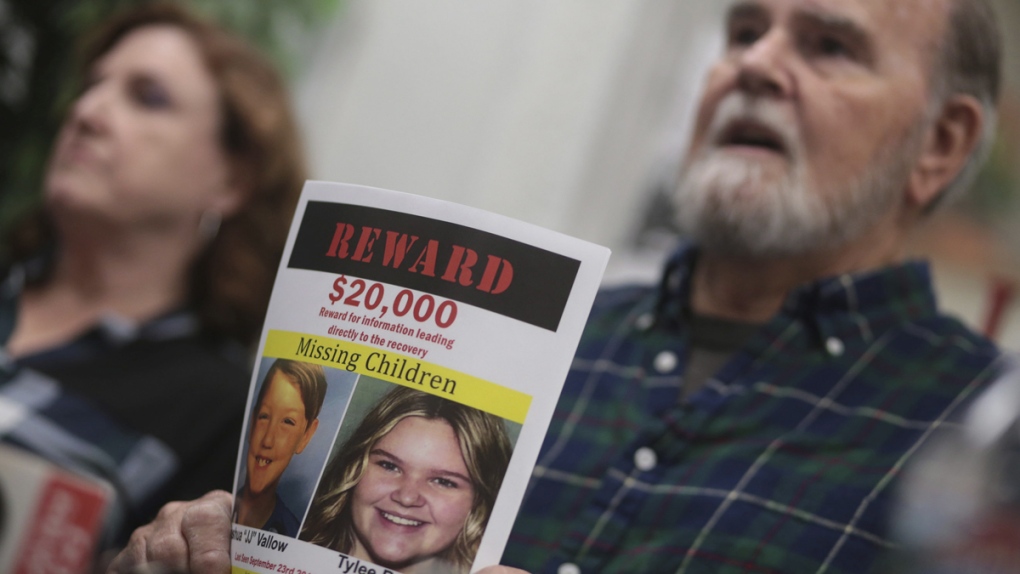 Kay and Larry Woodcock speak to members of the media at the Rexburg Standard Journal Newspaper in Rexburg, Idaho, on Jan. 7, 2020. (John Roark / The Idaho Post-Register via AP)

HONOLULU -- The disappearance of an Idaho boy and his teenage sister last year has led to the arrest of their mother in Hawaii, a major development in a bizarre case that spans multiple states, includes three mysterious deaths and touches on the mother's doomsday beliefs.

Lori Vallow, 46, also known as Lori Daybell, was arrested Thursday on an Idaho warrant and was being held on $5 million bail, according to police on the island of Kauai. Vallow has been charged with two felony counts of child abandonment that can carry a prison sentence of up to 14 years.

Seven-year-old Joshua "JJ" Vallow and 17-year-old Tylee Ryan have not been seen since September, and their disappearance has captured attention worldwide after authorities pleaded for help finding them late last year. Police in the city of Rexburg, Idaho, have said they "strongly believe that Joshua and Tylee's lives are in danger."

Newly released court documents in eastern Idaho paint a bleak picture, with police saying Vallow lied about her children's whereabouts and that JJ's winter clothes and other belongings have been found in an abandoned storage unit. Rexburg police Lt. Ron Ball wrote in a court document filed this week that Vallow's bank account shows no sign that she is providing money to anyone to care for the kids.

Tylee hasn't been seen since Sept. 8, Ball wrote, when she went to Yellowstone National Park with JJ, Vallow and Vallow's brother Alex Cox. Police tracked down a photo of Tylee at the park entrance.

JJ was enrolled at a school for three weeks and was last seen there, shortly before Vallow told employees that she was going to homeschool the boy.

"We have not been able to find any witnesses who have seen J.V. since September 24, 2019," Ball wrote in a probable cause affidavit.

Police also have said Vallow and her husband, Chad Daybell, have lied about the children's whereabouts and even their existence. Daybell told someone that Vallow had no kids, and she told another person that her daughter had died more than a year earlier, authorities said.

Vallow must be extradited before she can face charges in Idaho, a process that often takes weeks. Kauai police said in a statement that she was expected to appear in court Friday but provided no other details.

Vallow's attorney in Idaho, Sean Bartholick, did not respond to phone and social media messages seeking comment. An email to Daybell was not immediately answered.

Vallow also is accused of disobeying a court order that required her to bring her children to Idaho authorities last month.

The tangled case includes investigations into three deaths. Vallow's estranged husband, Charles Vallow, was shot and killed in Phoenix last July by Cox, her brother. Cox, who claimed the shooting was in self-defence, died of unknown causes in December.

Test results on her remains and toxicology results for Cox have not yet been released.

Vallow reportedly believes she is "a god assigned to carry out the work of the 144,000 at Christ's second coming in July 2020," according to divorce documents Charles Vallow filed before his death.

Chad Daybell has written several apocalyptic novels based loosely on the theology of The Church of Jesus Christ of Latter-day Saints. Both were involved in a group that promotes preparing for the biblical end times.

Police questioned Daybell and Vallow about the missing children in late November, and the couple left town before police returned the next day.

In December, Idaho authorities asked police on the Hawaiian island of Kauai for help finding the couple. On Jan. 26, Kauai police served a search warrant on a vehicle and condo the couple were renting in the resort town of Princeville.

Some have questioned why Vallow wasn't arrested earlier, but it can be complicated. Generally, there's no legal obligation to tell police where a child is unless a court proceeding is involved, said Chuck Peterson, a prominent Idaho criminal defence attorney. He isn't involved in the case but has followed it in the news.

It's legal to refuse to talk to police, but lying to an officer is different, he said Friday.

"It's good to have a crime first," Peterson said. "To get the arrest warrant, you have to have probable cause to believe that a crime occurred."

When Vallow defied the court deadline to produce her kids in Idaho, she faced a possible misdemeanour charge. He said the process that law enforcement appears to have followed "is almost the best hope that there was: You would get the mom for criminal contempt, and then you'd have to get a warrant, and then you'd have to apply for extradition out of Hawaii."

Chad Daybell isn't legally liable for the kids as long as he didn't put them in a situation where they were hurt, Peterson said.

"We all want to believe that there's some sort of moral imperative -- if you know where these kids are, you would tell -- but there's no legal obligation to support the children," he said. "There's no independent obligation to come forward with evidence to a crime."