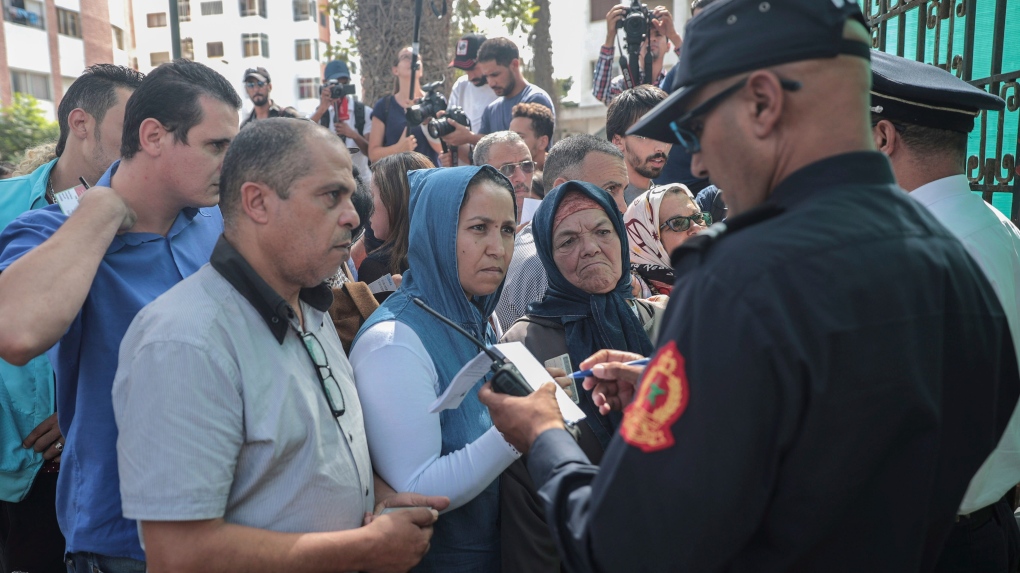 Observers and relatives prepare to enter a court where journalist Hajar Rissouni is being tried on accusations of undergoing an illegal abortion, in Rabat, Morocco, Monday, Sept. 30, 2019. (AP Photo/Mosa'ab Elshamy)

RABAT, Morocco - A Moroccan journalist accused of undergoing an illegal abortion after becoming pregnant while being single was sentenced to one year in prison Monday in a case that gained attention among journalists and rights groups.

Hajar Raissouni, 28, has been jailed since Aug. 31. She denied having had an abortion and claimed she was married to her Sudanese fiance under Islamic law.

The fiance also received a one-year sentence while the doctor accused of terminating the pregnancy was sentenced to two years in jail and suspended from practicing for two years upon his release, the court said.

Raissouni's lawyers said they would appeal the sentence.

While in custody, Raissouni said she was mostly interrogated about her work as a journalist, her colleagues at the Arabic-language Akhbar al-Yaoum newspaper - a major daily critical of the state - and family members.

In May, Raissouni published interviews with Ahmed Zefzafi, the father of Nasser Zefzafi, leader of the Hirak Rif poverty-fighting protest movement.

Her uncle Suleyman Raissouni, the editor in chief at her newspaper, said the decision was “shocking.”

“If this verdict confirms anything, then it would be that this arrest was (an act of) revenge against Hajar and her editorial family at the newspaper,” he told The Associated Press.

Raissouni's arrest sparked a wave of pro-abortion protests across the country, with many seeing her case as a serious blow to the progress of women's rights in Morocco. Before Monday's ruling, the court had twice denied requests for her temporary release.

Abortions are illegal in Morocco as is premarital sex, but Raissouni claimed she was arrested outside a clinic she visited for an “urgent intervention,” not an abortion. Police reportedly forced Raissouni to have a medical exam at the time of her arrest.

Amnesty International had called for Morocco to drop charges and release her.