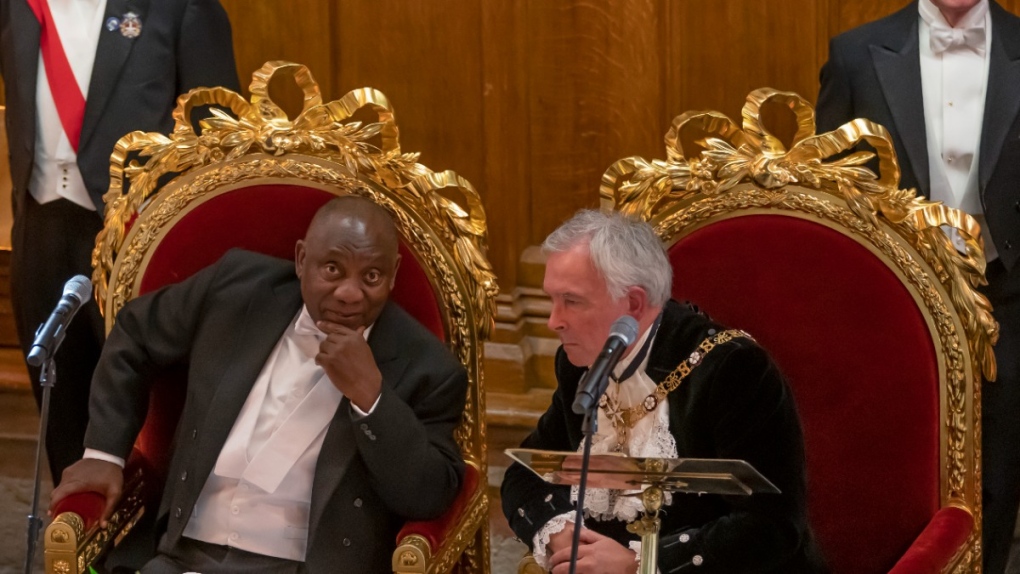 South Africa President Cyril Ramaphosa, left, and Lord Mayor of the City of London Nicholas Lyons speak at a banquet in the Guildhall, in London, on Nov. 23, 2022. (Kin Cheung / AP)
JOHANNESBURG -

South African President Cyril Ramaphosa faced calls Thursday to step down after a parliamentary panel's probe found he may have breached anti-corruption laws in connection with the alleged theft of a large amount of money from his Phala Phala game farm.

The calls follow allegations by the country's former head of intelligence, Arthur Fraser, that Ramaphosa tried to conceal the theft of a huge sum of cash stuffed into couches at his farm in 2020. Fraser, an ally of the president's political rival and predecessor, Jacob Zuma, accused Ramaphosa of money laundering and violating foreign currency control laws.

In its report, the parliamentary panel raised questions about the source of the money and why it wasn't disclosed to financial authorities, and cited a potential conflict between the president's business and official interests.

Ramaphosa has denied any wrongdoing, insisting that the money was proceeds from the sale of animals at his farm. But opposition parties and Ramaphosa's detractors in the ruling African National Congress party have called for him to step down.

The ANC's national executive committee, the party's highest decision-making body, is expected to meet Thursday evening to be briefed on the matter and possibly to determine Ramaphosa's fate. Ramaphosa is seeking reelection as party leader during the ANC's upcoming conference. That would enable him to run again for South Africa's presidency in 2024.

Lawmakers are expected to debate the report on Tuesday, and they will vote on whether further action should be taken, including whether to proceed with impeachment proceedings. ANC lawmakers are a majority in Parliament and may push back against attempts to impeach their leader.

"The president appreciates the enormity of this issue and what it means for the country and the stability of government," Ramaphosa's spokesperson Vincent Magwenya told reporters, saying the president is still processing" the report. "We are in an unprecedented and extraordinary moment as a constitutional democracy as a result of the report, and therefore whatever decision the president takes, it has to be informed by the best interest of the country. That decision cannot be rushed," Magwenya said.

According to the parliamentary report, Ramaphosa claimed the stolen money amounted to $580,000, disputing the initial amount of $4 million that Fraser alleged was stolen.

The report also questioned Ramaphosa's explanation that the money was from the sale of buffaloes to a Sudanese businessman, Mustafa Mohamed Ibrahim Hazim, asking why the animals remained at the farm more than two years later.

The report said an investigation by the central bank suggested there were no records of the dollars entering the country. "We are unable to investigate or verify the source of the foreign currency," it states.

The parliamentary panel said Ramaphosa put himself into a situation of conflict of interest, saying the evidence presented to it "establishes that the president may be guilty of a serious violation of certain sections of the constitution."

The report criticized Ramaphosa for failing to inform the police in line with proper procedures, choosing instead to entrust the matter to the head of his presidential protection unit.

The main opposition party, the Democratic Alliance, is among those calling for Ramaphosa's impeachment.

"President Ramaphosa most likely did breach several constitutional provisions and has a case to answer. Impeachment proceedings into his conduct must go ahead, and he will have to offer far better, more comprehensive explanations than we have been given so far," Democratic Alliance leader John Steenhuisen said.

Political analyst Dale McKinley said he was not convinced there is enough information to force Ramaphosa to resign.

"I don't see Cyril Ramaphosa stepping aside unless he is charged. If he is charged, he is going to have to swallow it and basically do that," McKinley said. "If he does not get charged and it is simply just this impeachment process, my sense is that ... he will try to shore up his base and ride it out. I might be wrong, but I think politicians, their first instinct is survival."