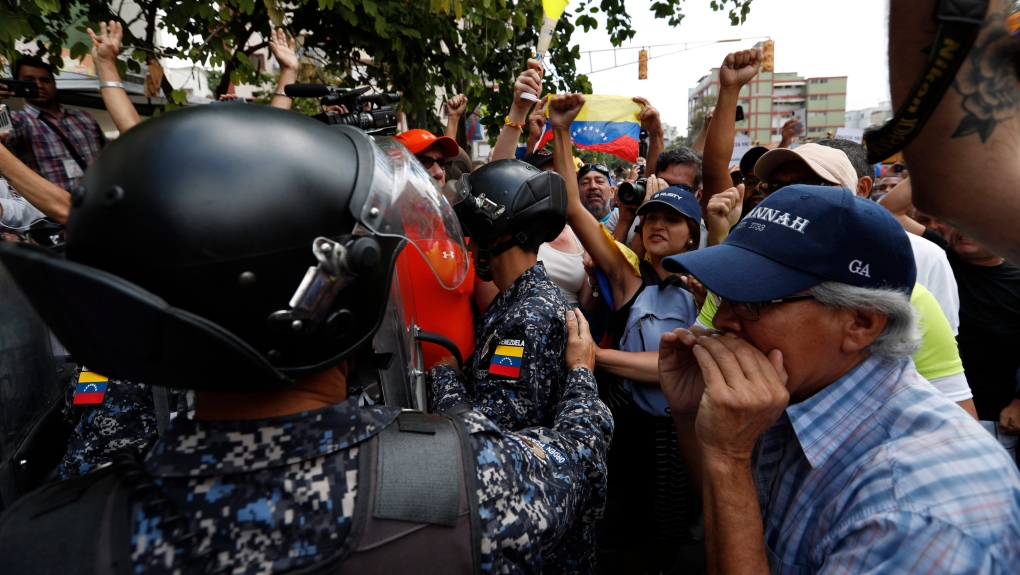 CARACAS, Venezuela -- The Venezuelan opposition and government loyalists held rival demonstrations in Caracas on Saturday, as both sides prepared for what some fear could be a protracted power struggle.

The rallies unfolded as power and communications outages continued to hit Venezuela, intensifying the hardship of a country paralyzed by economic and political crisis. The blackouts heightened tension between the bitterly divided factions, which accused each other of being responsible for the collapse of the power grid.

"Hard times are ahead," said opposition leader Juan Guaido, who addressed crowds with a loudspeaker after security forces earlier dismantled a speakers' stage that the opposition had erected. He said he planned to tour Venezuela to seek support and lay the groundwork for a massive rally in Caracas.

The 35-year-old leader of the National Assembly said he anticipated more government efforts to sideline and intimidate the opposition. However, President Nicolas Maduro's government has not moved directly against Guaido since he returned to Venezuela from a Latin American tour Monday.

Guaido earlier speculated that Maduro was effectively ignoring him in an attempt to sap the energy of the opposition, whose hopes of ousting the government have so far been stymied.

But on Saturday, Maduro stepped up verbal attacks on Guaido, calling him "a clown and puppet" in a speech to supporters outside Miraflores, the presidential palace. He scoffed at Guaido's claim in late January to be interim president of Venezuela, a declaration supported by the United States and about 50 other countries.

"Not a president, not anything," said Maduro, who accused Guaido and his U.S. allies of sabotaging Venezuela's Guri Dam, one of the world's largest hydroelectric stations and the cornerstone of Venezuela's electrical grid.

He said authorities had restored 70 per cent of power in Venezuela since what he called an "international cyberattack" late Thursday, but progress was lost on Saturday when "infiltrators" allegedly struck again.

The Venezuelan opposition and U.S. officials say Maduro's attempts to pin blame on his political adversaries is absurd, and that government corruption and mismanagement over many years caused the blackout and wider deterioration of the economy.

In another blow to Venezuela's infrastructure, an explosion occurred at a power station in the country's Bolivar state on Saturday, according to local media. Video posted on social media showed fire and smoke billowing from the site. Venezuelan authorities have not commented.

Netblocks, a non-government group based in Europe that monitors internet censorship, said Saturday that the second outage had knocked out almost all of Venezuela's telecommunications infrastructure.

Earlier, it referred to online connectivity data indicating that the initial outage that began Thursday and eased about 24 hours later was the largest on recent record in Latin America.

Managers of the Caracas subway said they were waiting for the electricity supply to stabilize before resuming service, and the power grid problems quickly became only another issue that galvanized Venezuelans to take to the streets.

Opposition protesters who converged on Avenida Victoria in Caracas vented anger over the country's problems, including hyperinflation and shortages of basic necessities. They pushed against the shields of riot police who avoided a clash by withdrawing from the area.

Some protesters elsewhere in the city said police tried to block them from reaching the rally, creating a sense of confusion as power and communications outages plagued the country.

"This is chaos," said Jorge Jaimes, a physician frustrated with the decline of a country that was once the wealthiest in Latin America.

At the pro-government rally, people danced and waved flags on what organizers labeled a "day of anti-imperialism" in a show of defiance toward the United States, which has imposed oil sanctions on Venezuela in an attempt to oust Maduro. Many showed up wearing red caps and shirts in support of the self-proclaimed "socialist revolution" of leader Hugo Chavez, who died six years ago and was succeeded by his protege, Maduro.