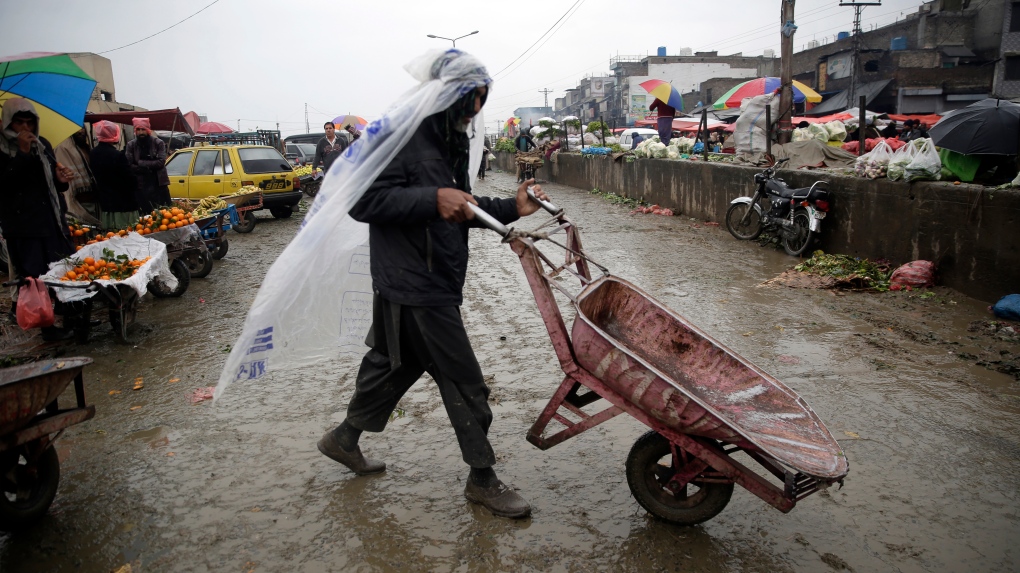 A man covers himself with a plastic sheet to protect from the rain at a market in Islamabad, Pakistan, Jan. 22, 2022. (AP Photo/Rahmat Gul)
QUETTA, Pakistan -

At least six people, including women and children, were killed when the roofs of their homes collapsed in heavy rains lashing southwestern Pakistan and other parts of the country, a provincial disaster management agency said Tuesday.

There were fears the death toll could be higher as several people went missing after flash flooding hit southwestern Baluchistan province’s remote areas overnight, according to a statement from the agency.

Authorities say the latest spell of torrential rains, which started on Monday and continued on Tuesday, also damaged dozens of homes in Baluchistan.

Since June, rains have killed 38 people and damaged more than 200 homes across Pakistan, including in Baluchistan, where over the weekend, a passenger bus skidded off a road and fell into a deep ravine amid heavy rain, killing 19 people.

Quebec Cardinal Marc Ouellet is accused of sexual assault in documents tabled in Superior Court Tuesday related to a class-action lawsuit against the Roman Catholic Archdiocese of Quebec. The allegations against Ouellet are part of a series of claims made against clergy members that are included in two class-action lawsuits against the church that have been authorized by a judge.

Parents of young children will need a prescription for some over-the-counter fever and pain medication due to a shortage in pharmacies, Toronto's Hospital for Sick Children is warning.