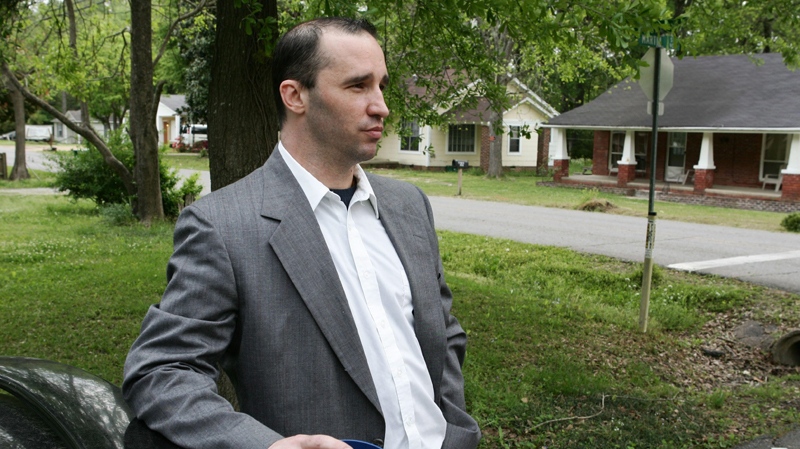 OXFORD, Miss. -- A former martial arts instructor pleaded guilty Friday to sending poison-laced letters to President Barack Obama and other officials in a bizarre case in which authorities say he tried to frame a longtime enemy and Elvis impersonator who was briefly jailed in the case.

Dutschke, 42, shackled and wearing an orange jail uniform, glanced around at a few dozen spectators, mostly lawyers, reporters and law students from the nearby University of Mississippi, as he was led into U.S. District Court in Oxford, Miss.

When called to stand before the judge, Dutschke, a martial artist, approached with confidence, his back straight and chin up. He answered the judge's first questions, such as age and level of education, in a clear, strong voice. But when the judge began going over the process of pleading guilty, Dutschke choked up, using a tissue to blow his nose. He later regained his composure.

Dutschke appeared to have a hard time pleading guilty to a list of factual elements read by a prosecutor, telling the judge he didn't agree with some of what was alleged.

After some discussion, the judge asked Dutschke again if he was voluntarily pleading guilty. He looked down, paused and took a deep breath.

"I am voluntarily entering this plea and I understand fully in doing so that I am accepting responsibility for everything that he mentioned," Dutschke said. He said the possibility of spending the rest of his life in prison if convicted by a jury was a factor in his plea decision.

After court, Dutschke's lawyer, Ken Coghlan, said he thought it was a fair deal, and declined further comment.

Dutschke had previously pleaded not guilty and denied sending the letters. He also denied a later charge that, while incarcerated, he tried to recruit someone else to send a ricin-tainted letter. Prosecutors say he tried to frame Elvis impersonator Paul Kevin Curtis, who was initially charged in the investigation. Charges against Curtis were later dropped.

Dutschke has been jailed since April on charges of sending the letters to Obama, Republican U.S. Sen. Roger Wicker, and a Mississippi judge. The judge was the only one to receive a letter, though she was not harmed. The letters to Obama and Wicker were intercepted.

The 25-year sentence included in the plea agreement would run concurrently with any sentence Dutschke would face in state court, where he's facing unrelated fondling charges.

Authorities first arrested Curtis for allegedly sending the letters, which contained statements that Curtis had often used on his Facebook page, including the line, "I am KC and I approve this message." The letters also contained the phrase "Missing Pieces," the same title as an unpublished book Curtis wrote about his belief that there's a black market for body parts in the United States.

But charges against Curtis were dropped when the investigation shifted to Dutschke. Curtis says the men have feuded for years.

A second indictment, filed in November, alleged that while incarcerated, Dutschke tried to recruit someone else to send a ricin-tainted letter.

According to the indictment, Dutschke wanted the latest letter to say: "It doesn't matter the Fife types have the wrong one. D. had to be sacrificed to show the corruption in the system. I tried to warn you. Ha. K."

Dutschke is a former martial arts instructor in the north Mississippi town of Tupelo, Elvis Presley's birthplace. He had also run unsuccessfully for public office, including for a state legislative seat in which he challenged the son of the state court judge who received one of the letters.

Curtis was not in court for the hearing, but his lawyer said afterward that she hopes the healing process can now begin for her client.