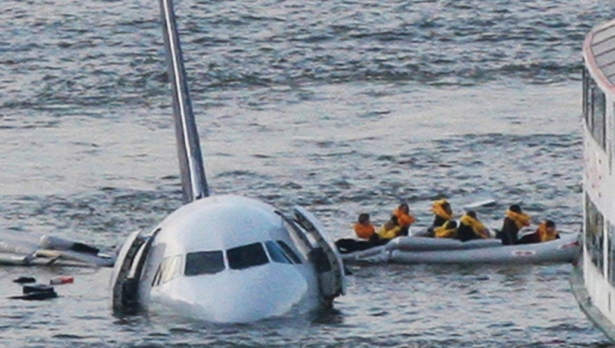 FILE - In this Jan. 15, 2009 file photo, passengers in an inflatable raft move away from an Airbus 320 US Airways aircraft that has gone down in the Hudson River in New York. (AP Photo/Bebeto Matthews, File)

NEW YORK -- Birds took the blame for bringing down the jetliner that "Sully" Sullenberger landed on the Hudson River eight years ago this weekend. They have been paying for it with their lives ever since.

An Associated Press analysis of bird-killing programs at the New York City area's three major airports found that nearly 70,000 gulls, starling, geese and other birds have been slaughtered, mostly by shooting and trapping, since the 2009 accident, and it is not clear whether those killings have made the skies safer.

Federal data show that in the years after bird-killing programs LaGuardia and Newark airports ramped up in response to the gutsy landing, the number of recorded bird strikes involving those airports actually went up.

At the seaside Kennedy Airport, which is on a major route for migrating birds and had a robust slaughter program even before the Flight 1549 crash, the number of reported strikes has ticked up, too, while the number of birds killed there has dropped slightly in some recent years.

Advocates for the birds say officials should find other, more effective ways to protect aircraft.

"There has to be a long-term solution that doesn't rely so extensively on killing birds and also keeps us safe in the sky," said Jeffrey Kramer, of the group GooseWatch NYC, suggesting better radar systems to detect problematic flocks.

Officials involved in the bird-killing programs say they believe they've made flying safer, with their strongest argument that there hasn't been a major crash involving a bird strike in the New York area since the "Miracle on the Hudson."

"We do our best to reduce the risk as much as possible," said Laura Francoeur, the chief wildlife biologist at the Port Authority of New York and New Jersey, which oversees the airports. "There's still a lot of random chance involved."

That was the case on Jan. 15, 2009, when US Airways Flight 1549 took off from LaGuardia and almost immediately soared into a flock of big Canada geese. Two engines were knocked out. Sullenberger guided the powerless jet over the Hudson River and glided it safely down in the frigid water. All 155 people on board survived.

Sullenberger became a national hero. Geese became public enemy No. 1. They were targeted around LaGuardia, JFK and Newark airports by wildlife officials with shotguns. In some cases, birds were rounded up in traps and killed.

But the Port Authority data of bird-slaughter campaigns around the three major New York City-area airports between 2009 and last October show thousands of smaller birds were also swept up.

Of the 70,000 birds killed during that time, the most commonly slaughtered were seagulls, with 28,000 dead, followed by about 16,800 European starlings, nearly 6,000 brown-headed cowbirds and about 4,500 mourning doves. Canada geese come in a little further down the list, with about 1,830 dead.

Of the 249 birds that damaged an aircraft from 2004 to April of last year, 54 were seagulls, 12 were osprey, 11 were double-crested cormorants and 30 were geese, according to Federal Aviation Administration data. The species wasn't known in 69 instances.

Close to 35,000 European starlings were slaughtered at the three airports during that time period, but only one was involved in a strike that actually damaged an aircraft.

A starling, probably weighing less than 3 ounces, hit a JetBlue flight coming in for a landing at JFK on Sept. 10, 2008, breaking a taxi light. The FAA recorded 138 other instances of European starlings being hit by planes over those dozen years without any harm to the aircraft.

History serves as a reminder that the starling, while small, can still be dangerous. A flock of the birds was blamed for one of the deadliest bird strikes in history, a 1960 crash in Boston that killed 62 people.

Francoeur noted that lethal control represents just one way in which airport officials try to keep birds out of a 5-mile radius around the airports' runways.

Officials trap and relocate some birds, use pyrotechnics and lasers to disperse others, and even change the habitat surrounding airports by planting grass and trees or introducing certain insects to discourage nesting.

Last year, the Port Authority signed a five-year, $9.1 million agreement with the U.S. Department of Agriculture to survey, manage and research the wildlife around the airports.

At JFK, an official with a 12-gauge shotgun shoots birds from May through October as part of the Bird Hazard Reduction Program, which seeks to reduce a Laughing Gull colony in the Jamaica Bay Wildlife Refuge that had exploded in size.

"One must consider the consequences if this proven shooting program was discontinued and a serious bird strike occurred while the colony was still present," Port Authority documents state.