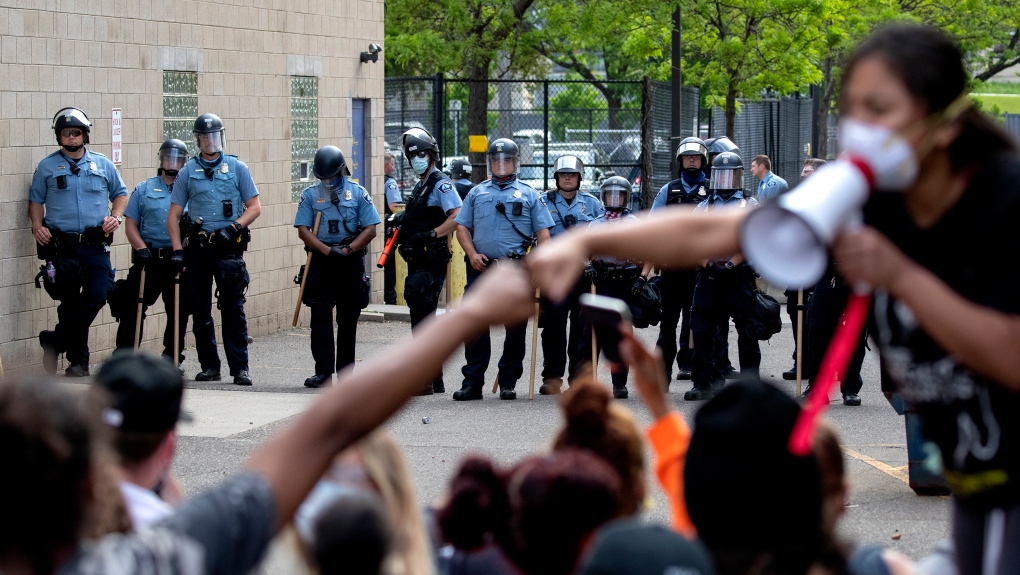 In this May 27, 2020, file photo, people gather in front of the Minneapolis police standing guard, as they protest the arrest and death of George Floyd. (Carlos Gonzalez/Star Tribune via AP, File)

Minneapolis Mayor Jacob Frey on Friday announced plans to hold open 100 police officer positions next year as part of a hiring freeze to help manage a 2021 budget and as activists are clamouring to shift money away from traditional policing.

Frey said the city projects about 100 officers, from a force of more than 800, will have left the department by the end of the year. He called it a chance to remake the department, which has come under intense pressure to change in the wake of George Floyd's death in May.

“As officers from past generations leave, it's incumbent on us to ensure that officers of future generations enter the department committed to our shared vision,” Frey said. “We cannot squander this opportunity to make significant progress with Chief (Medaria) Arradondo in shifting the MPD culture, but we cannot rely on attrition and recruitment as our only tools for that shift.”

Floyd, a Black man who was in handcuffs, died May 25 after a white Minneapolis police officer held his knee to Floyd's neck for nearly eight minutes as Floyd pleaded that he couldn't breathe.

An attorney for police officers said last month that more than 150 have filed work-related disability claims after Floyd's death and the protests that followed, some of them violent. About three-quarters cited post-traumatic stress disorder.

Minneapolis police union head Lt. Bob Kroll, who said in June that officers are being scapegoated by city and state elected leaders after Floyd's death, didn't respond to a phone message seeking comment.

Frey opposed a City Council majority's push to dismantle the police department, favouring structural change instead. His budget speech points toward one way he hopes to do it.

Frey proposed rehiring 28 community service officers that act as liaisons between officers and diverse communities. The positions, held by civilians typically studying to become law enforcement, were cut late last month as the city reworked its 2020 budget to accommodate for the pandemic.

Minneapolis expects a loss of nearly $156 million in revenue, and is using a mixture of spending freezes, employee furloughs, cuts to programs and use of the city's cash reserves to make up for it. As part of revisions this year, the City Council shifted $1.1 million away from the police department's budget and into the city's Office of Violence Prevention.

The mayor's 2021 budget proposes continuing hiring and spending freezes, as well as reorganization of city departments and an early-retirement program to reduce layoffs.

Weeks after Floyd's death, the city council unanimously approved a measure that would amend the city charter to replace the police department with a new public safety department. The proposal failed earlier in August when a 15-member body that oversees the charter voted to take three more months to consider the amendment, effectively keeping it off the ballot in November.

Frey repeated his opposition to abolishing the police department on Friday. His budget address included a proposal to free up officers by diverting staff to the city's 311 service to take crime report calls. He also supported further investment in the city's violence prevention programs to “centre community in transforming public safety.”

“Every single person in this body of government wants to see a focus on prevention and intervention, and public safety solutions that go well beyond policing,” he said. “Everyone who has signed up to serve this city wants to be sure that every single resident in every single neighbourhood feels safe.”

Council member Steve Fletcher said the Office of Violence Prevention is something the council has been nurturing and trying to gain support for since it was created in 2018, and he appreciated seeing the mayor proactively propose further investment in the department.

“That really shows that he's listening both to community and to the council, and really trying to find areas of alignment that we can move forward together on,” he said.

The city council will review Frey's proposed budget when a more specific plan is released next month. The final budget is expected to be approved by the city council in December.