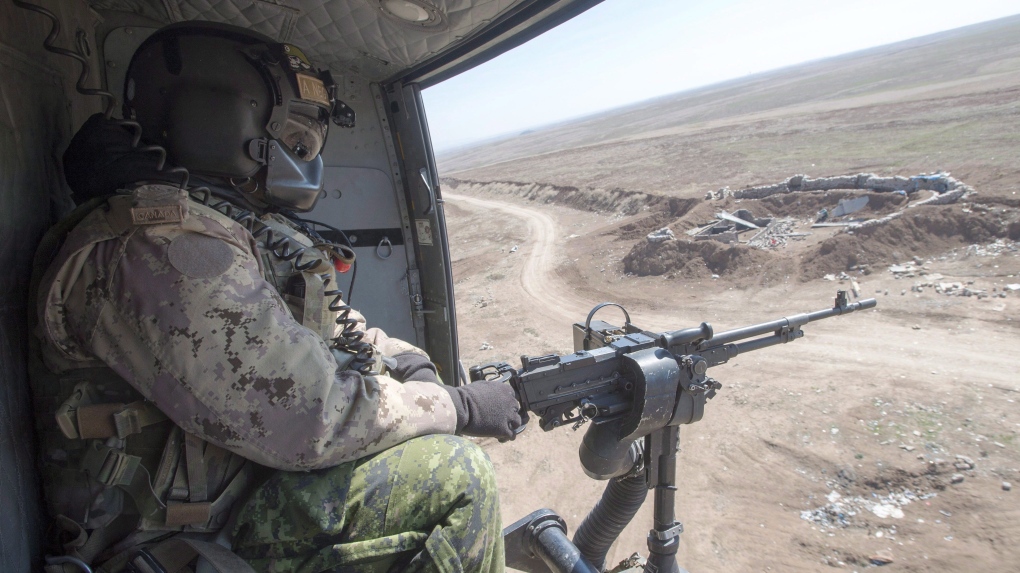 A Canadian Forces door gunner keeps watch as his Griffon helicopter goes on a mission, February 20, 2017 in northern Iraq. THE CANADIAN PRESS/Ryan Remiorz

OTTAWA -- Canadian troops involved in the six-year-old war against ISIS risk being caught in the middle of escalating tensions between the U.S. and Iraq.

The dispute between Washington and Baghdad revolves around the rising threat posed by Iranian-backed militia groups in Iraq, which have stepped up their attacks against U.S. targets in recent weeks.

That includes several rocket attacks against the U.S. embassy in Baghdad and a strike on Wednesday targeting an American military base that is also home to dozens of Canadian soldiers.

U.S. military officials say the rockets did not hit the base located near the city of Irbil in Iraq's Kurdistan region, and the Department of National Defence said all Canadian troops at the base were safe.

Canada has around 170 military members in Iraq, including an undisclosed number of special forces soldiers working out of Irbil and another group participating in a NATO-led training mission in the south.

Canada's ambassador to Iraq joined other allies in expressing concern about attacks against diplomatic missions in Baghdad after a meeting with Iraq's Prime Minister Mustafa Al-Kadhimi on Wednesday.