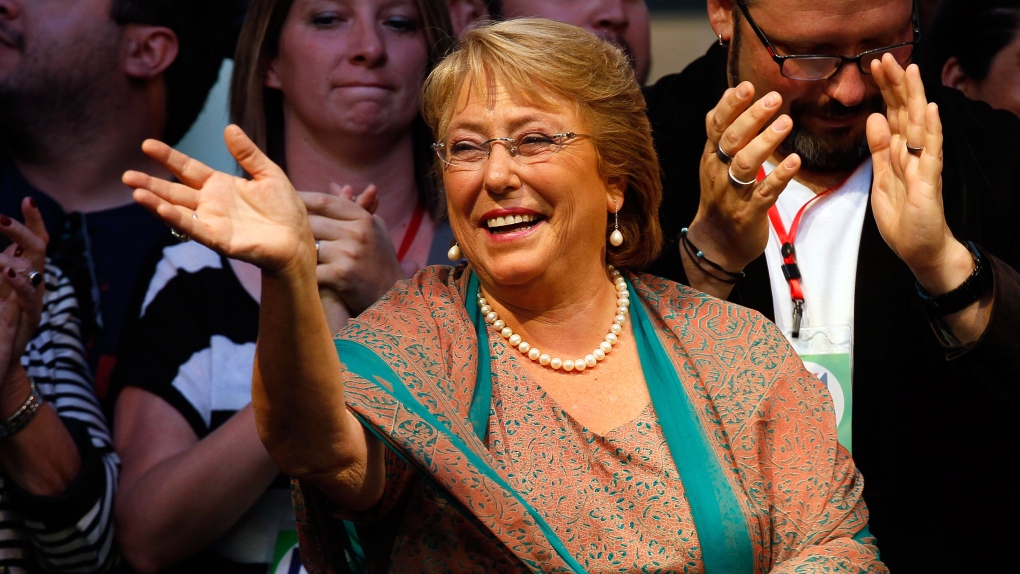 Bachelet won 62 per cent of the vote, the most decisive victory in eight decades of Chilean elections. Her conservative rival, Evelyn Matthei only got 37 per cent of the vote and conceded defeat in the worst performance for the right in two decades.

Bachelet needs the momentum of her resounding victory to strengthen her mandate and try to overcome congressional opposition to fulfil her promises.

The 62-year old pediatrician ended her 2006-2010 presidency with 84 per cent approval ratings despite failing to achieve any major changes. This time however, activists are vowing to hold her to her promises, which include raising corporate taxes to 25 per cent from 20 per cent to help fund an education overhaul and changing the dictatorship-era constitution, a difficult goal given congressional opposition.

"The social and political conditions are here and at last the moment has arrived," Bachelet told more than 10,000 cheering supporters gathered for her victory speech.

"If I'm here it's because we believe that a Chile for everyone is necessary. It won't be easy, but when has it been easy to change the world?"

Many Chileans complain that policies imposed by Gen. Augusto Pinochet's 1973-1990 dictatorship have kept wealth and power in few hands. Pinochet effectively ended land reform by selling off the nation's water, and he preserved the best educations for elites by ending the central control and funding of public schools.

Opinion polls pointed early to a bruising defeat for Matthei, a former labour minister, because of her past support for Pinochet and her ties to outgoing President Sebastian Pinera. Pinera, a billionaire entrepreneur, was Chile's first centre-right president since democracy's return and is the most unpopular, with just 34 per cent support in the latest CEP poll.

This was Chile's first presidential election after voter registration became automatic, increasing the electorate from 8 million to 13.5 million of the country's nearly 17 million people. But voting became optional with the change, and only 50 per cent of voters turned out in the first round, frustrating both the major coalitions. In the runoff, only 5.5 million voted -- 41 per cent.

It also was Chile's first choice between two women, both with long careers in politics.

Bachelet and Matthei share a dramatic history: Playmates while growing up on a military base, they found themselves on opposite sides of Chile's wide political divide after the 1973 military coup.

Matthei's father became a member of Pinochet's junta while Bachelet's father was tortured to death for refusing to support the strongman. Bachelet, a moderate socialist, was imprisoned herself and forced into exile to the former East Germany.

When she returned to Chile in 1979, she studied medicine, specializing in pediatrics. She began working at an organization that helped children with mental health problems whose parents had been victims of the dictatorship.

At the same time, she rose through the Socialist Party and became a key player in the centre-left coalition that dominated Chile's government for almost 20 years after Pinochet gave up power.

Bachelet is known as an astute negotiator, and her charisma and ability to evoke a close relationship with people has on occasion helped her overcome mistakes. But her critics say her faults have not been few or small.

When a devastating earthquake struck in 2010 killing more than 500 people just 11 days before the end of her term, the national emergency office failed to issue a tsunami warning. Many coastal dwellers had figured they were safe, and failed to run to higher ground.

Chile is the world's top copper producer, and its fast-growing economy, low unemployment and stable democracy are the envy of Latin America. But many Chileans say more of the copper wealth should be used to fix the underfunded public education system.

"Abroad you often hear that this country has been growing and progressing more than others in Latin America, but it can't be just a matter of growth," Paola Bustamante, a 40-year-old sculptor, said after voting for Bachelet. "We need urgent educational reform, improvements to health, and I feel Bachelet can fulfil promises of deep changes this time around."