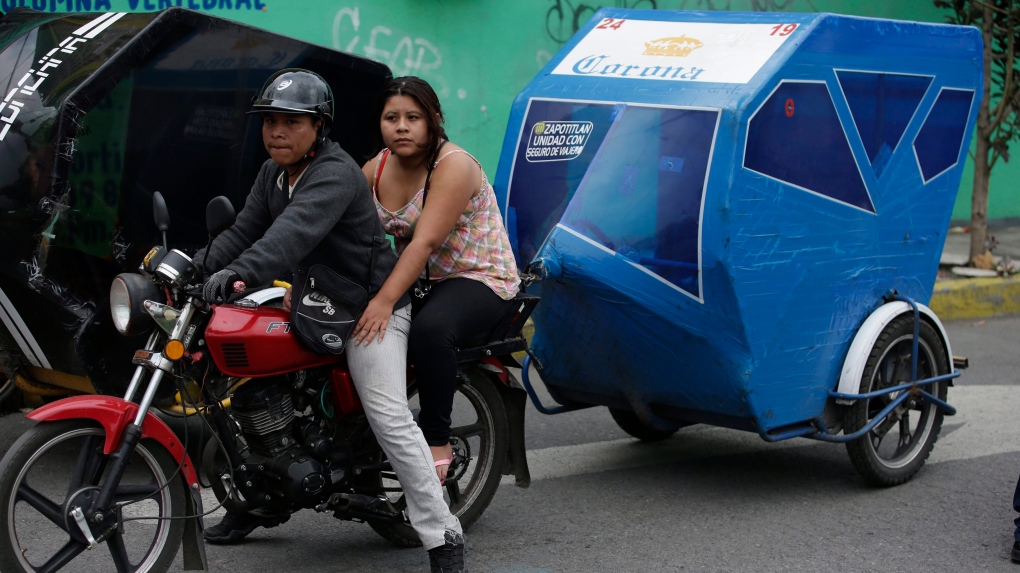 A motorcycle taxi driver pauses to look at marines blocking the area where a suspected drug gang leader and seven others were killed in a shootout in the Tlahuac district of Mexico City, Thursday, July 20, 2017. (AP Photo/Rebecca Blackwell)
TIJUANA, Mexico -

Days of widespread drug cartel arson and shootings in four states last week have left Mexicans asking why the drug cartels exploded and what do they want.

The attacks killed 11 people, including a young boy and four radio station employees who were randomly shot on the streets of the border city of Ciudad Juárez, across from El Paso, Texas, on Thursday.

Two days earlier, more than two dozen convenience stores owned by a well-known national chain were set ablaze in the northern state of Guanajuato. Cars and buses were commandeered and burned in neighbouring Jalisco state. And two dozen vehicles were hijacked and set on fire in cities on the California border Friday.

The federal government deployed soldiers and National Guard troops to calm residents' fears, but the outbursts of violence raised questions about President Andres Manuel Lopez Obrador's approach of putting all responsibility for security in the hands of the military rather than civilian police forces.

Some were quick to brand the arson and shooting attacks as terrorism, while the government denied it. Interior Secretary Adan Augusto Lopez said, "They are not terrorist attacks; you don't have to exaggerate the facts."

But it is not clear what the goal was.

"I think that the orders that were given to these gunmen was to cause chaos," said Mexican security analyst Alejandro Hope. "Generate chaos, generate uncertainty, generate fear, shoot at anything that moves. That is something that generates terror."

Lopez Obrador suggested Monday the attacks were part of a political conspiracy against him by opponents that he describes as "conservatives" and he argued that "there is no big problem" with security.

"I don't know if there was a connection, a hidden hand, if this had been set up," he said. "What I do know is that our opponents, the corrupt conservatives, help in the black propaganda."

Defence Secretary Luis Cresencio Sandoval said later that the cartels had lashed out because they have been weakened. "They want to still feel like they're strong and they generate violent situations where by way of publicity they send messages that they are still strong," he said.

"Today we are saying to the organized crime groups that are committing these crimes that Tijuana is going to remain open and take care of its citizens," Caballero said in a video. "And we also ask them to settle their debts with those who didn't pay what they owe, not with families and hard-working citizens."

The streets of central Tijuana were busy Monday after an unusually quiet weekend of cancelled medical appointments and closed restaurants.

On Monday morning, pedestrians waited more than three hours to enter the United States at the San Ysidro border crossing connecting Tijuana and San Diego. There was no visible stepped-up security presence in central Tijuana.

Omar Garcia, who runs a clothing souvenir stand near the border crossing in Tijuana, said tourism evaporated over the weekend. He was encouraged by Monday's heavy traffic but said the violence could turn into an economic jolt to his business.

"They are blows that come occasionally," said Garcia, 34, who has sold souvenirs at the border crossing since he was a young boy. "We are 100% dependent on tourism. If they get scared, they don't come."

Jose Andres Sumano Rodriguez, a professor and security specialist at the Northern Border College in Matamoros, a city on the border with Texas, said the decision of targeting civilians was a considered one.

The cartels "have learned that when they pressure on the side of generating terror and attacks on civilians, it gives them good results," he said. "Often it is much more effective to do this than have direct confrontation with the armed forces, where they are almost always going to lose."

For security analyst David Saucedo, the attacks were "narco terrorism," and he said the Jalisco New Generation Cartel was behind the violence in the states of Guanajuato and Baja California.

Saucedo said there has been a change in Mexico's drug policy since last year, when soldiers at roadside bases simply watched as cartels battled for control of the western state of Michoacan with bomb-dropping drones, IEDs and landmines.

Saucedo said the change may have angered the cartels.

Mexico has made more attempts to capture drug lords, something Lopez Obrador previously said he wasn't interested in. Mexican marines captured fugitive drug lord Rafael Caro Quintero in July after years on the run for the 1985 killing of DEA agent Enrique "Kiki" Camarena.

And Mexico's seizures of meth labs and the synthetic opioid fentanyl have risen sharply in recent months.

"There has been a change in the strategy in fighting drug cartels. Andres Manuel (Lopez Obrador) has been very much criticized recently for his `hugs, not bullets' strategy," Saucedo said. "I think that due to pressure from Joe Biden, he is changing that and agreeing to capture high-profile drug traffickers."

The spark that set off the chaos in Jalisco and Guanajuato last week was apparently the military coming upon a meeting involving a boss from the Jalisco cartel. Sandoval, the defence secretary, said the soldiers hadn't known about it and were just trying to intercept a cartel convoy.

"The narco terrorism of the Jalisco New Generation Cartel is a reaction to the president's change in strategy," Saucedo said. "If the Mexican president continues with this strategy of capturing high-ranking members of the Jalisco cartel, the Jalisco cartel is going to respond with acts of narcoterrorism in the states it controls as part of its vast empire."

Sandoval said there has been no change in strategy.

"It's not that we're looking for the leader ... it's not that operations are centred on certain levels of the organization," he said.

"We have to know where to employ that force, where to use it, the quantity of people we have to send to reinforce, the specific places and know where we have to act to be able to guarantee security," Sandoval said.

He denied the government was not being reactive, noting that in 19 of Mexico's 32 states the National Guard already has superior numbers to state authorities. "It is part of a strategy that is already laid out and that we are going to apply accordingly."

There have been such terrorist acts before. In June of last year, a faction of the Gulf cartel entered Reynosa on the border with Texas and killed 14 people authorities identified as "innocent citizens," as part of a bid to unseat a rival faction that controlled Reynosa.

Ana Vanessa Cardenas, coordinator of the international relations program at Anahuac Mayab University in Merida, said that with any other president half the security Cabinet would have been ousted, there would be consultations with international experts and work would be underway on new security strategy. But she expects no change from Lopez Obrador, who she considers to be in denial.

"We've seen a total militarization of security and of the country, which is the last rung," Cardenas said. "If having already reached the last rung in security we have an increase in violence, in murders, in narco control, then where do we go?"