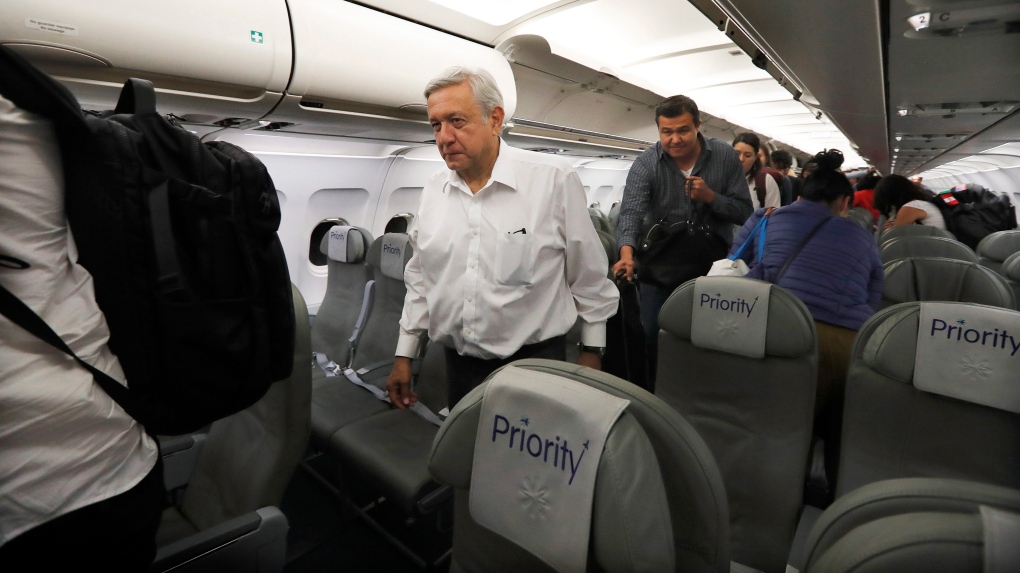 In this March 9, 2019 file photo, Mexican President Andres Manuel Lopez Obrador walks off the plane after traveling in economy class aboard a commercial flight from Guadalajara to Mexico City. Lopez Obrador said Friday that he will continue travelling to dedicate infrastructure projects around the country in spite of growing restrictions prompted by the coronavirus epidemic, including a shutdown of most federal government operations. (AP Photo/Marco Ugarte, File)

MEXICO CITY -- Mexico President Andres Manuel Lopez Obrador says it pains him to not be able to embrace supporters during his tours due to the risks of the coronavirus, but he made a remarkable exception on a weekend trip, shaking hands with the elderly mother of imprisoned drug kingpin Joaquin “El Chapo” Guzman.

Lopez Obrador was visiting a highway project in the western state of Sinaloa Sunday on a road that passes the town of Badiraguato where Maria Consuelo Loera Perez lives.

Lopez Obrador said Monday he was told she had come to the event and wanted to greet him. After the event, he went to the passenger side door of her vehicle and she extended her hand through the window.

Asked about shaking her hand at the time the government is urging citizens to practice social distancing, Lopez Obrador said it would have been disrespectful not to. “It's very difficult humanly,” he said. “I'm not a robot.”

He said she asked about a letter she had sent him in March asking the government to intervene in her request to be allowed to travel to the United States and visit her son in prison. Lopez Obrador said she told him she didn't want to die without seeing him. He said she's 92 years old.

“The fatal plague is corruption, not a senior citizen who deserves my respect independently of who her son is,” he said.

Later Monday, the president's office released a letter from Loera Perez dated March 20. In it she said that her lawyers had been in touch with the appropriate government agencies making clear they believe Guzman was illegally extradited to the U.S. and should be brought back to serve his sentence in a Mexican prison.

“Nothing would make me and my family happier than seeing him where he belongs in a Mexican prison,” she wrote. Guzman twice escaped from Mexican prisons.

Guzman was sentenced to life in prison by the U.S. in July. Lopez Obrador said the government would relay her petition as he would for any other citizen.

The meeting also appeared to align with Lopez Obrador's attempt to attack Mexico's crime problems through civility and jobs programs rather than all-out confrontations with security forces. While he repeatedly hammers white-collar criminals as the heart of the corruption he wants to eradicate, he has declined to condemn the drug cartels.