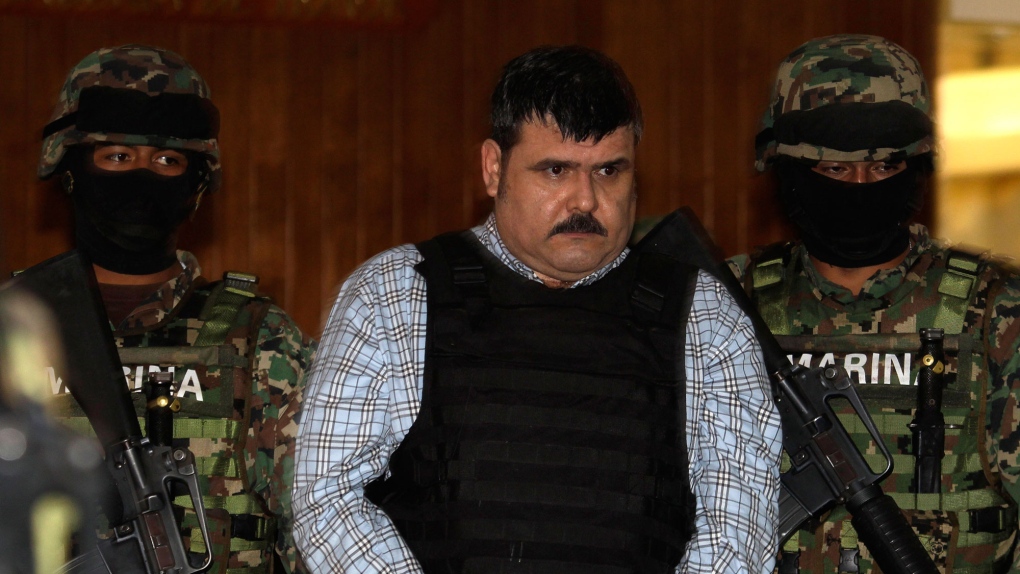 MEXICO CITY -- A man believed to be the leader of the Gulf drug cartel, which controls some of the most valuable and violently contested smuggling routes along the U.S. border, was arrested by Mexican marines and presented to the public Thursday morning.

The capture of Jorge Eduardo Costilla Sanchez is a major victory in the military battle against drug trafficking, but it could open a power vacuum and intensify a struggle south of the Texas border in northeast Mexico, a region that has seen some of the most horrific violence in the country's six-year war among law-enforcement and rival gangs.

Adm. Jose Luis Vergara, a navy spokesman, said the burly, mustachioed man detained Wednesday evening in the Gulf port of Tampico was the capo known as "El Coss." One of Mexico's most-wanted men, the 41-year-old is charged in the U.S. with drug-trafficking and threatening U.S. law enforcement officials. U.S. authorities offered $5 million for information leading to his arrest.

Clad in a blue plaid shirt and bulletproof vest, the suspect was presented along with 10 bodyguards, five with bruised faces and clad in camouflage military fatigues similar to those of the marines who held them captive. The navy also showed dozens of assault weapons, some pistols that appeared gilded and studded with jewels, and several expensive-looking watches seized in the operation.

"This is a very, very important arrest," said Guadalupe Correa-Cabrera, chair of the Department of Government at the University of Texas, Brownsville, and an expert on politics and crime in the Gulf Cartel's territory in the state of Tamaulipas.

She said the Gulf Cartel was a vertically structured organization dependent on its top leaders, several of whom have been arrested in recent months. Now, she said, she expects a surge in violence between the two remaining dominant cartels in Mexico -- the Pacific Coast-based Sinaloa Cartel run by Mexico's most-wanted man, Joaquin "El Chapo" Guzman, and the brutal paramilitary Zetas, the former enforcement arm of the Gulf Cartel.

"It consolidates this new configuration of organized crime in Mexico," Correa-Cabrera said. "This disintegration of the Gulf Cartel will be impacting in a very serious way the levels of violence in Tamaulipas and probably in the whole country."

Vergara said five of Costilla's guards had been arrested Wednesday morning in Rio Bravo, Tamaulipas. Five fled when marines tried to arrest them in Tampico, and the chase led authorities to Coss's hideout, he said.

The Matamoros-based Gulf Cartel was once one of Mexico's strongest. While it was badly weakened in recent years by battles with other gangsters and by law-enforcement operations, it smuggled and distributed tons of cocaine, methamphetamine, heroin and marijuana into the United States under the leadership of the Cardenas Guillen family, three brothers who took over from one another as their siblings were captured or killed.

Costilla was born in Matamoros, across the border from Brownsville, Texas. He worked for several years as a local police officer before allegedly joining the Gulf Cartel in the 1990s and becoming a lieutenant for then-leader Osiel Cardenas Guillen.

After Cardenas Guillen was arrested in 2003 and imprisoned in the U.S., officials say Costilla joined the capo's brother Ezequiel in running the cartel. The tumult at the top prompted the powerful Sinaloa cartel to move in from its base along the Pacific Coast and launch a war for control of Nuevo Laredo, the busiest cargo crossing between the United States and Mexico

The Gulf won the fight, backed by a gang of assassins recruited from the Mexican military special forces. Emboldened by their success in holding Nuevo Laredo, the enforcers known as the Zetas began asserting their independence and split from the Gulf Cartel in 2010 after the slaying of a Zeta member in the city of Reynosa, across from McAllen, Texas, that Costilla is believed to have ordered.

The resulting fighting between the former allies transformed northeastern Mexico, an area home to cattle ranches, sorghum fields and the industrial city of Monterrey into a sort of war zone rocked by daily shootouts and gruesome violence that included decapitations and corpses hung from bridges.

Ezequiel Cardenas was the cartel's figurehead until he was killed in November 2010 in a shootout with Mexican marines in Matamoros. Authorities believe Costilla controlled the cartel's daily drug trafficking activities but kept a low profile. Only two photographs of him were ever made public.

HIs removal from the scene could serve as an opening for Sinaloa or the Zetas, who have become the nation's dominant cartels, to move in on smuggling routes that have been believed to include the border cities of Reynosa and Matamoros, and the Gulf port of Tampico.

El Coss's capture would be a significant victory for the marines, who were embarrassed in June after announcing they had nabbed the son of Mexico's top fugitive drug lord.

It turned out the man wasn't the son of Joaquin "El Chapo" Guzman, but rather Felix Beltran Leon, 23, a stocky, baby-faced suspect whose family said he was the father of a toddler and worked with his mother-in-law at a used car dealership. He remains in custody, authorities say, because guns and money were found when he was arrested.

The announcement of Costilla's arrest comes just more than a week after the navy said it had detained another brother of Osiel Cardenas Guillen, Mario, in the Gulf Coast city of Altamira.

The navy said in announcing that arrest that the cartel had apparently divided into two wings after Ezequiel Cardenas' death.

Arrests of high-ranking cartel leaders often lead to detentions of others, some because officials find intelligence with the suspects, others because detainees swiftly turn against their former comrades and provide information that leads to their arrest.

In November 1999, a Drug Enforcement Administration agent and an FBI agent, both assigned to the U.S. consulate in Monterrey, had been followed by a car through Matamoros until a truck cut them off.

They were quickly surrounded by about a dozen heavily armed men, allegedly including Costilla and Osiel Cardenas Guillen, who threatened to kill them. The agents eventually persuaded the gunmen to let them go.