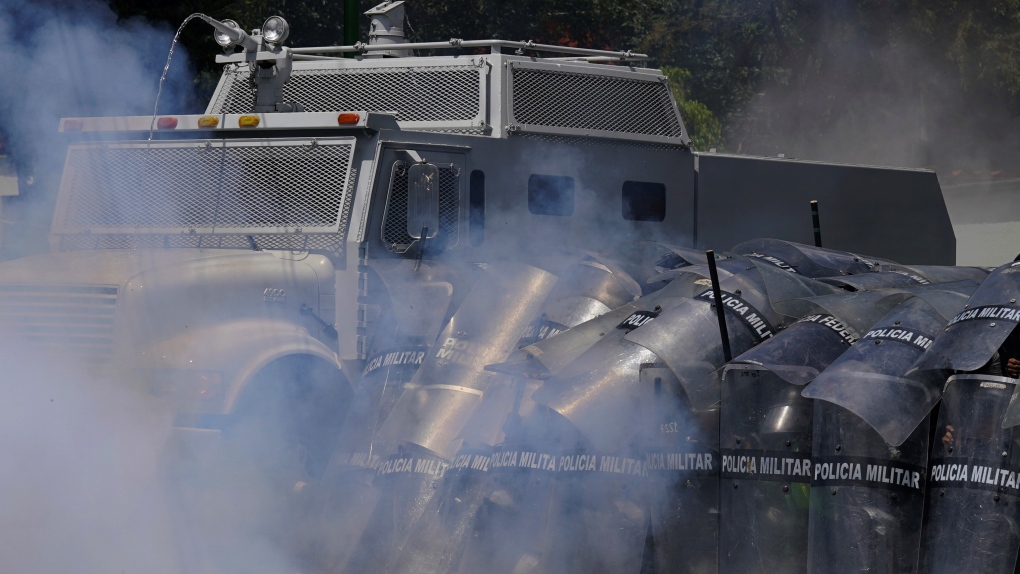 Police and soldiers take cover from explosive devises thrown by demonstrators protesting the disappearance of 43 college students at a military base in Mexico City, Friday, Sept. 23, 2022, days before the anniversary of the disappearance of the students in Iguala, Guerrero in 2014. (AP Photo/Fernando Llano)
MEXICO CITY -

The Mexican army's role in the disappearance of 43 college students, its participation in covering up the facts and its alleged links to organized crime are now at the centre of a case that has shaken the nation. The government's Truth Commission declared the incident a "state crime" in August.

Three members of the military and a former federal attorney general were recently arrested in the case, and few now believe the government's initial claim that a local drug gang and allied local officials were wholly to blame for seizing and killing the students on July 26, 2014, then burning their bodies -- most of which have never been found.

But the newspaper Reforma, which obtained portions of a Truth Commission report shared with the Attorney General's Office, has published details of messages between drug gang members and the military that appear to show at least some of the students' bodies were taken to a local army base. Advocates for the students' families fear the leak of sensitive details about suspects could jeopardize prosecutions.

Here are some questions and answers about the abductions.

The president of the Truth Commission, Alejandro Encinas, says that the false, official version announced at the time by Attorney General Jesus Murillo Karam "was designed at the highest levels of the federal government" after meetings in the presidency, then in the hands of Enrique Pena Nieto.

According to that version, Iguala officials thought the students were going to disrupt a local political event. It says police rounded up the 43 students and turned them over to a local drug gang, which killed the youths, burned their bodies at a dump and threw the remains into a river.

Although all the students apparently were murdered, it has since been proven that they were taken in groups to different places. Some apparently were kept alive for days.

The students had hijacked buses to get to a protest in Mexico City and were intercepted in Iguala -- possibly because one of the buses contained a drug shipment.

WHO HAS BEEN ARRESTED RECENTLY?

Three members of the military were arrested this month, among them Jose Rodriguez Perez, who as a colonel commanded the local army base in Iguala at the time of the students' disappearance. The Truth Commission report alleges he ordered the killing of six students days after their abduction.

Rodriguez Perez was later promoted to general. Now retired, he faces organized crime charges. A fourth member of the military, Capt. Jose Martinez Crespo was arrested in 2020. On Saturday, the Spanish newspaper El Pais published documents showing that the Attorney General's Office had asked a judge to drop arrest orders against 16 other members of the military. The office did not respond to requests for comment.

The most politically significant arrest took place last month when former Attorney General Murillo Karam was detained. He has been charged with forced disappearance, not reporting torture of suspects and official misconduct. He is accused of announcing a false version of events that he called "the historical truth."

WHAT WAS THE MILITARY'S ROLE?

It was known from the beginning that the army had real-time knowledge of events in Iguala on that night because soldiers were in key locations, including a police coordination centre. The Truth Commission report says at least one soldier was infiltrated among the kidnapped students.

In 2015, then-Army chief Gen. Salvador Cienfuegos guaranteed that the army had no responsibility in the events either by action or omission. Communications collected by the Truth Commission, however, contradict that assertion. They suggest military personnel were in contact with the criminals at key moments.

WERE THERE ARMY INFILTRATORS?

The Truth Commission report says at least one of the disappeared students was a soldier sent to spy on the college and an attorney for parents has contended there was another. Separately, relatives of Julio Cesar Mondragon, one of six students killed after surviving the initial attack and then being tortured, have asked for an investigation of two other students -- now politicians -- who were the leaders who sent the group of protesters to Iguala despite threats the school had received.

WHERE DO THINGS STAND IN THE JUDICIAL PROCESS?

The Ayotzinapa case is a tangle of 28 criminal cases spread over seven states. Eight years later, no one has been convicted.

Still being sought is the man who headed the early investigation into the abductions, Tomas Zeron, who is in Israel. Mexico is seeking his extradition.

Due to the torture of witnesses and other irregularities, dozens of defendants have been acquitted of some charges. However, many of them remain imprisoned on other charges.

WHY IS THE MEXICAN ARMY'S RECORD CONTROVERSIAL?

President Andres Manuel Lopez Obrador has increasingly used the military to build major infrastructure projects and to replace police in the fight against crime, arguing it is less corrupted than other agencies.

Accusations of human rights abuses against the military were common during the "dirty war" of the 1970s and '80s. They were especially harsh in the poor, opium poppy-growing state of Guerrero. Some abuses have continued -- as well as allegations of officers linked to drug cartels.

In the last 25 years, three generals have faced charges in Mexico, although only one has been convicted.

The defence secretary at the time of the abductions, Cienfuegos, was arrested in the U.S. in 2020 and accused of links to drug cartels. But under pressure from the Mexican government, the charges against him were later dropped and he was returned to Mexico, which released him.

In the Iguala area where the students were abducted, ties between the military and criminals go back at least to 2013. According to a court document to which The Associated Press had access, members of the military helped a local cartel with weapons and training for its hitmen.

The testimony of an imprisoned criminal suspect said Capt. Jose Martinez Crespo, who was arrested in 2020, received money from a leader of local drug gang, Guerreros Unidos, to help them move weapons. "He used his vehicles so he could move freely through the region," the witness said.