Menu from 1913 found during refurbishment 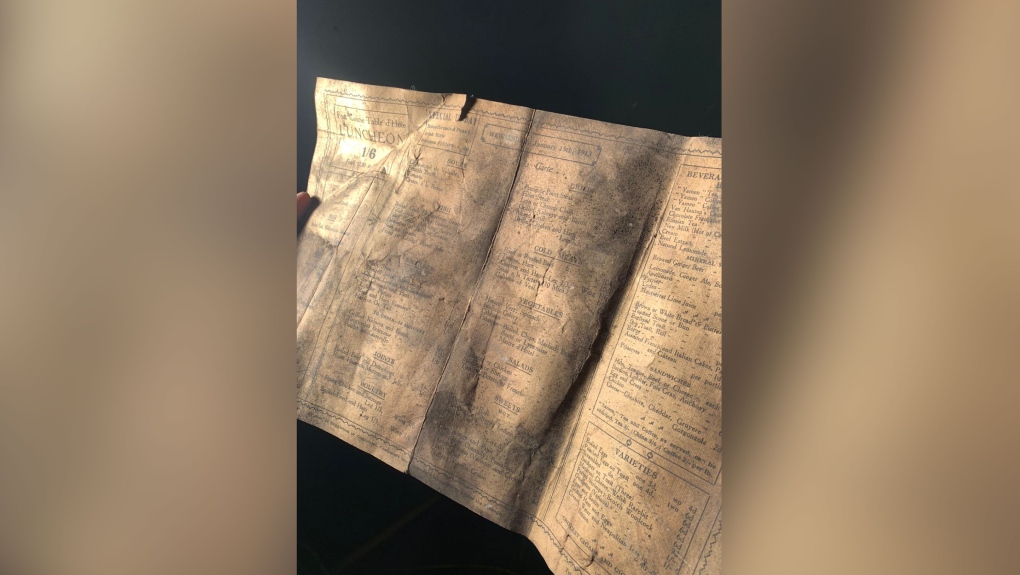 Builders renovating a Liverpool cafe found a "mind blowing" 1913 menu when it fell from the rafters, leading to the discovery of a staff hat, game of whist, and a number of bottles. (Courtesy Leaf)

Builders in the English city of Liverpool have unwittingly uncovered a piece of culinary and local history when an intact menu from 1913 fell from the ceiling during a renovation project.

The menu, dated Wednesday January 15 1913 and branded "Yamen Café and Tea Rooms," was among a number of artifacts discovered in the rafters of the Leaf café on Bold Street, central Liverpool, last week.

Other items included a waiter's hat with "Yamen" embroidered on the rim, instructions for the English card game of whist and bottles.

Leaf founder and owner Natalie Haywood told CNN Thursday that the discovery was "mind blowing" and almost "creepy" -- given that Leaf itself sells speciality teas, like its predecessor.

The items, she said, were found in the rafters of the mezzanine, which she had previously used as an office space and was being transformed into a private event space.

"Down came fluttering from the ceiling this menu from 108 years ago. It's in absolutely unbelievable condition," Haywood said.

'A time capsule in the rafters'

"The quality and standard of the food being served before the First World War is so forward thinking, so advanced, that it must have been the culinary hot spot of Liverpool," Haywood said.

Bold Street, she said, now has a "bohemian" feel to it but was an "exclusive" area in the 1900s -- akin to London's Bond Street.

The wide variety of cuisines on the menu point to the restaurant having been operating at a time when Liverpool was a bustling maritime city, Haywood added.

"Liverpool at that time was very wealthy, and a large percentage of the world's sea traffic went through the port," she said. "It was the Bond Street of the north, really."

"We have had a very decadent and illustrious past and I think that really proves that we were forward thinking on the culinary side of things as a city."

Haywood said she had put out an appeal for local historians to help shed some light on the café and the artifacts and had also contacted an art gallery for advice on how to handle them.

She believes that because they were left in such condition, the items may have been left "purposefully" for someone to discover in the future.

Haywood hopes to display the items in the café and will permanently add two items -- the Irish stew and Welsh rarebit, to the menu.

She also plans to host a special evening serving a more extensive range of items from the menu, once lockdown restrictions have lifted in England and the refurbishment is complete.

"It's blown my mind really, that there [was] a time capsule in the rafters," she added.