Meghan and Harry visit with students at Harlem school 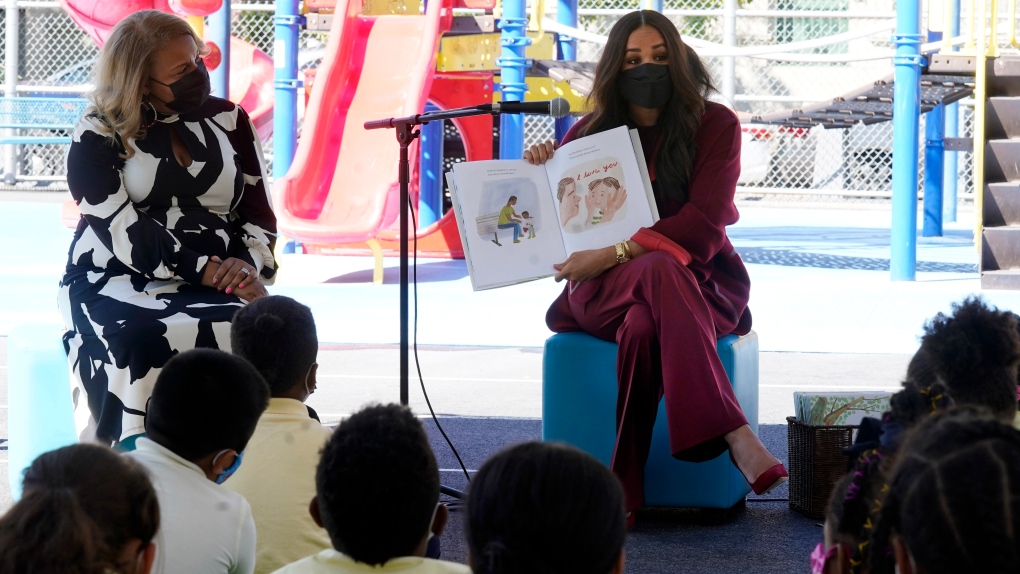 Meghan, the Duchess of Sussex, reads from her book "The Bench," during her visit with Prince Harry, to P.S. 123, the Mahalia Jackson School, in New York's Harlem neighborhood, Friday, Sept. 24, 2021. At left is New York City School Chancellor Meisha Porter. (AP Photo/Richard Drew)

NEW YORK -- Meghan and Harry, the Duke and Duchess of Sussex, offered lots of hugs to kids at a Harlem public school Friday where she read her children's book to about two dozen students who sat cross-legged with her husband in the play yard.

The hourlong visit to PS 123, which serves shelters for families without permanent homes, was one of several stops so far in a whirlwind New York week for the two. A couple of the children shed tears when they met the pair under a white tent set up near the school's play structure.

Nearly a dozen second-graders had prime spots on round, green cushions after older students showed off a three-dimensional flower mural they had created. Then Meghan read “The Bench,” which she initially wrote as a Father's Day poem to Harry after the birth of their son Archie.

After reading her multicultural tribute to fatherhood, Meghan took questions from her young listeners after asking them what special spot they share with the important people in their lives.

“It doesn't have to be a bench,” she told the children. “It can be anywhere where you feel comfortable.”

The couple, students and staff, joined by New York City Schools Chancellor Meisha Porter, wore masks during their time together. Harry and Meghan donated two garden boxes filled with vegetables and herbs to the school. Through their Archewell Foundation, in partnership with Procter & Gamble, they also stocked the school's pantry with personal health and hygiene supplies. They plan to donate a washer and dryer to the school as well so more children can have clean uniforms.

Meghan wore a merlot trouser outfit to the appearance, while Harry wore khakis and a casual gray collar shirt.

The couple, who live in California after stepping aside from royal duties last year, are scheduled to appear on Saturday at a Global Citizen concert aimed at raising awareness and money to tackle a variety of issues, including climate change, global poverty and vaccine inequity. The two, in partnership with the World Health Organization, gathered a key group of NGOs, executives, experts, public health officials and world leaders Thursday for a joint dialogue on achieving shared global COVID-19 vaccine equity goals.

At the school, also called the Mahalia Jackson school, a heckler with a bullhorn stood just outside the fence blaring anti-vaccine mandate and anti-mask mandate vitriol as Harry and Meghan visited with the students.

The school, supported in part by the youth and family nonprofit Graham Windham, serves children in kindergarten through eighth grade. Meghan donated copies of her book, published by Random House, to the school, and the students presented Meghan with paper hearts of pink and white with drawings and messages to conclude the visit.

James Reynolds, an art teacher who helped with the mural as part of a collaboration with the Studio in a School program, called the visit “really extraordinary” considering New York students recently returned to classrooms after the pandemic upended in-person learning.

“Being able to meet her was like a chance of a lifetime. Everybody was really excited. It was a secret from all of us. It was really a marvelous experience,” he said.

And those tears from some of the students?

“I think (it was) gratitude, because we have been through a lot in the last 18 months. We're sensitive in ways that we probably weren't on the other side of this,” he said, referring to the pandemic. “I think they were just eternally grateful that she took time to stop by.”