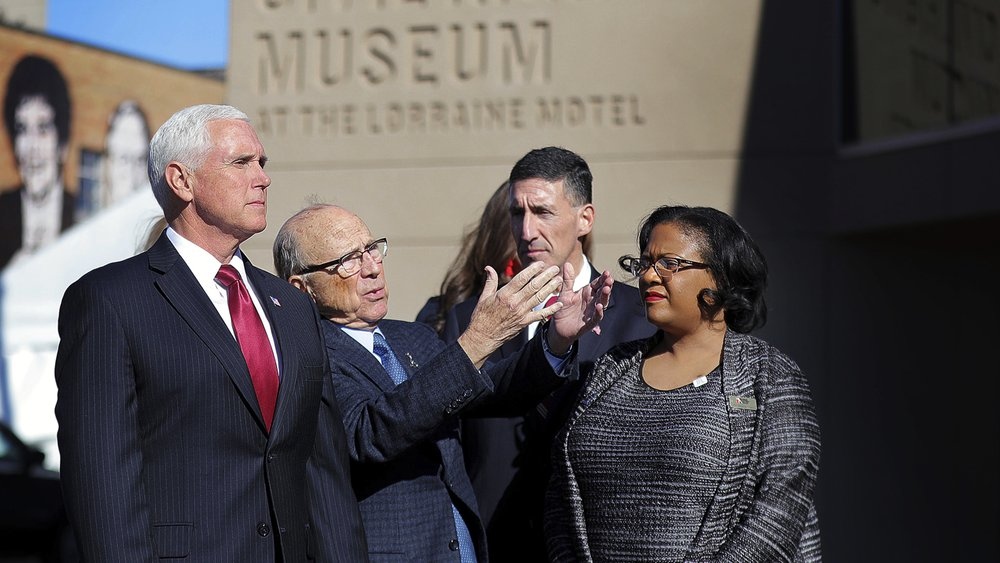 In Atlanta, Republicans told a sometimes cool crowd at Ebenezer Baptist Church, King's onetime church, that they were honouring King's legacy of service and political empowerment. But Democrats found more favour by highlighting the ways they said the current political and social order calls for more radical action in line with King's principles.

Monday's speeches at Ebenezer Baptist were just one slice of the political struggle in Georgia, where Democrats believe they can make further inroads in the Republican controlled state, aided by diverse in-migration and a suburban backlash against President Donald Trump.

Up for re-election this year, Trump sought to stamp his own mark on the commemoration. He and Vice-President Mike Pence made a brief visit to the Martin Luther King Jr. Memorial in Washington. Earlier in the day, Trump sent a tweet noting that it was the third anniversary of his inauguration: "So appropriate that today is also MLK jr DAY. African-American Unemployment is the LOWEST in the history of our Country, by far. Also, best Poverty, Youth, and Employment numbers, ever. Great!"

Black unemployment has reached a record low during the Trump administration, but many economists note economic growth since 2009 has driven hiring. The most dramatic drop in black unemployment came under President Barack Obama. Despite economic success, polls find most African American voters regard Trump with distaste.

"Dr. King's call to service, to sacrifice, to put others first, it shaped our home and inspired us to ask what Dr. King asked the world. `What are you doing for others?"' Loeffler said.

One of Loeffler's Democratic opponents in a November special election could be the Rev. Raphael Warnock, the current pastor at Ebenezer, which King and his father once led. Warnock, without mentioning Loeffler by name, said that honouring King means more than just voicing "lip service" on one weekend a year.

Of King, Warnock said that "too many people like to remember him and dismember him at the same time," calling Georgia "ground zero for voter suppression" and citing the failure of the state's Republican leadership to fully expand the Medicaid health insurance program.

Others agreed with him, with keynote speaker Rev. Howard-John Wesley of Alexandria, Virginia, telling attendees that "we have lost the radicality" of King's vision, talking about how King attacked the Vietnam War and the unequal American economy at the end of his career.

Loeffler made no mention of Trump or the Senate impeachment trial, but Democratic U.S. Rep Hank Johnson did, drawing applause when he mentioned impeachment and saying American democracy is "in grave danger."

"Our communities are once again finding themselves on the front lines of fighting to protect our very republic," Johnson said. "And it can be easy, brothers and sisters, in moments like these to despair. But even in our darkest hours, the legacy of Dr. King is a hope that dawn will come."

Georgia's Republican Secretary of State, Brad Raffensperger took the stage, seeking to build confidence that his office supports broad voter participation and that the state's new voting machines will guarantee a fair vote. Democrats led by former gubernatorial nominee Stacey Abrams have attacked his actions, including a mass purge of inactive voters from the state's voting rolls.

"Every voter gets one vote. We all have a voice. We all count," Raffensperger said.

King's daughter Bernice spoke about the King holiday becoming a day of service, "a day on, not a day off." She said the holiday needs a broader vision.

"A day on is not enough. What we need is a light on, committed to working vigilantly to build the beloved community," she said. "A light on encompasses a commitment not just to service but to systemic change as well."

The same kind of wrestling over what King means in the present moment was taking place elsewhere, with Pence speaking Sunday at a church service in Memphis, Tennessee.

Pence spoke at the Holy City Church of God in Christ about King's religion and how he "challenged the conscience of a nation to live up to our highest ideals by speaking to our common foundation of faith."

Acknowledging the nation's divisions, Pence said that if Americans rededicate themselves to the ideals that King advanced while striving to open opportunities for everyone, "we'll see our way through these divided times and we'll do our part in our time to form a more perfect union."

As a presidential election looms this fall, divisions rankle, according to recent opinion polls.

Among black Americans, more than 80% said last year that President Donald Trump's actions in office have made things worse for people like them, while only 4% said they thought Trump's actions have been good for African Americans in general. That's according to a poll conducted by The Associated Press-NORC Center for Public Affairs Research.

This story has been corrected to show that U.S. Sen. Kelly Loeffler was appointed by Georgia Gov. Brian Kemp last month, not this month.