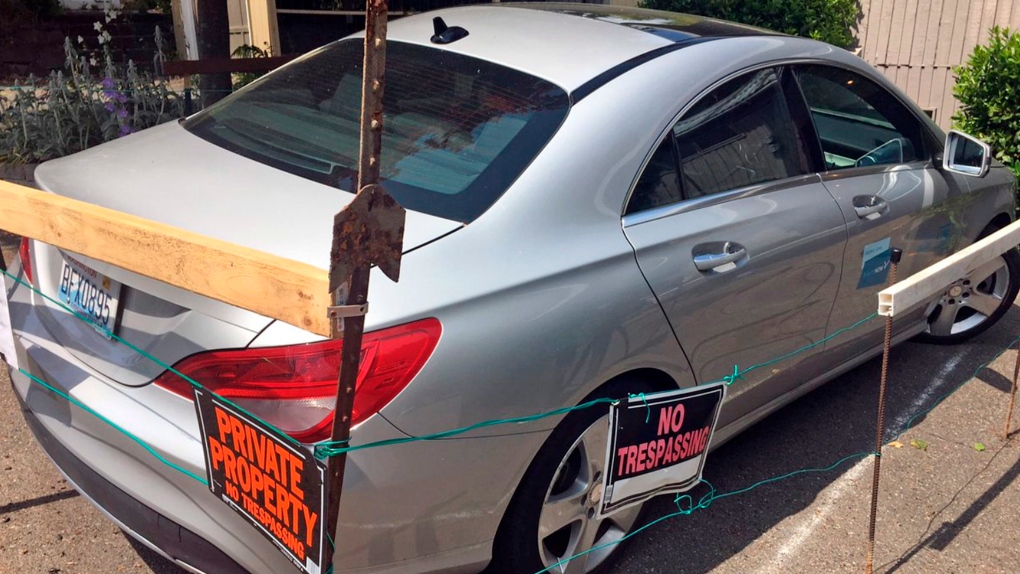 This undated photo provided by KOMO News shows a car-share vehicle parked at a Seattle duplex. Dan Smith took exception to the car2go Mercedes that has been parked there since May 17, 2019. (KOMO News via AP)

SEATTLE -- A Seattle man took exception to a car-share vehicle that was parked without permission at his duplex. So he built a fence around it.

Dan Smith told KIRO-TV he doesn't know who parked the car2go Mercedes May 17, but it wasn't one of his tenants. He contacted Share Now, the company that operates car2go, and gave them two hours to move the vehicle. A few hours after that, he erected the barricade, preventing other customers from using it.

In a written statement, Share Now suggested that might amount to extortion. Spokesman Tim Krebs told The Associated Press on Thursday that the company is seeking help from the police.

"We will not allow anyone acting with ulterior motives, including anyone attempting to extort our business by holding our property illegally, to prevent us from providing transportation to the citizens of Seattle," the company's statement said. "We would like to avoid taking legal action and hope for a quick resolution."

The company said it has been unable to remove the sedan because of the fence. Its policy requires customers who park in unapproved areas to pay any towing and ticketing fees; repeat offenders are banned from the service.

Smith told the AP he put up the barricade to make a point about respecting private property and because he was worried about liability if, for example, a customer became injured on his property. He said he initially tried to have the car towed, but three tow companies declined, with at least one noting that Smith had not posted signs warning that the spots were on private property and that violators could be towed.

If the police tell him he's in the wrong, he'll co-operate, he said, because he doesn't want that much trouble. But he said he has rights to control his property, and Share Now had made no arrangements and offered no compensation to use it.