Man survives after being pinned by giant tree crashing through roof 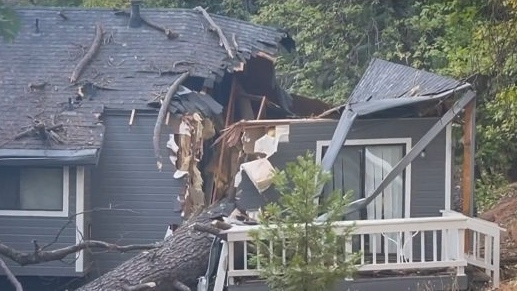 A 150-foot-tall, five-foot-wide pine tree crashed through a roof and pinned a man in his bed. (KOVR)

ALTA SIERRA, CALIFORNIA -- A man is recovering after a terrifying experience -- a giant pine tree came crashing through his roof, pinning him down as he lay in his bed Tuesday morning.

The tree was being felled when it came down in the wrong direction.

The 150-foot-tall, five-foot-wide pine tree is still lying inside the bedroom of the Alta Sierra home. The gaping hole in the roof exposing beams and debris that came crashing down -- all of it, on top of a man laying in his bed.

The man somehow escaped being crushed by a matter of inches and was left pinned by both the tree and the debris.

Dispatcher: "…additional response for medical…male trapped under a tree…"

Firefighter: "…confirming you want to use our equipment, or would you like us to stop by 88 and use the large animal rescue equipment…"

The man was alert as firefighters finally freed him using a basket scoop to get him out of the home.

"And I hear this, 'boom,' and I felt the house shake a little bit," Zuniga said.

A tree feller had been trying to cut down the massive tree after it was diagnosed as diseased when something went wrong.

"And the guy that was cutting the tree was like, running around, trying to do what he could do," McLeod said. "It was sad."

"It's cut in half," McLeod said. "I mean, the whole back end of it, that tree sliced it all the way down. It didn't, it just went all the way down, it didn't stop and part of it crumbled, or whatever, it just, like, severed it."

The fire department says the man suffered moderate injuries to his legs.

He is expected to be OK.