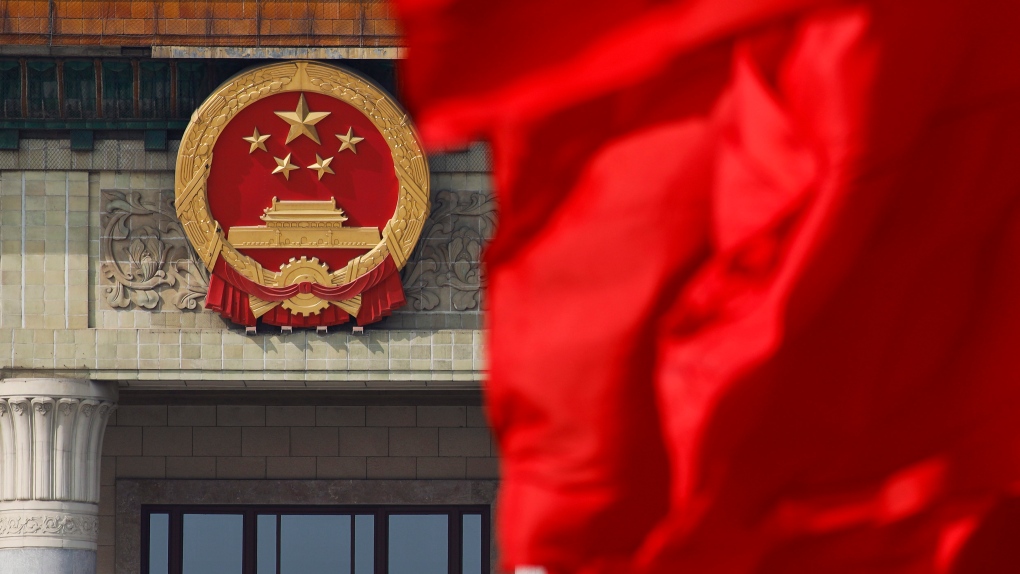 Red flags flutter in the wind near the Chinese national emblem outside the Great Hall of the People in this file photo taken Monday, March 4, 2019. (AP Photo/Andy Wong)

Warning: This story contains details that may be disturbing to some

A Chinese man who set his ex-wife on fire as she livestreamed to her online followers was sentenced to death on Thursday, concluding a murder case that received nationwide notoriety.

The victim, 30-year-old Lhamo, was a farmer and livestreamer in a Tibetan autonomous prefecture in southwestern Sichuan province. She was streaming a video of herself last September when a man burst in, poured gasoline on her and set her on fire. She died two weeks later.

Her ex-husband, Tang Lu, was arrested soon after. On Thursday in court, he was found guilty of homicide, sentenced to death and ordered to pay compensation, according to state-run broadcaster CCTV.

Tang had a history of physical abuse toward Lhamo, reportedly beating her many times before they divorced in June 2020, according to CCTV. In the following months, he repeatedly sought her out and asked to remarry, but was turned away -- leading to the murder.

The case was widely covered in national and international media, drawing attention for the gruesome nature of Lhamo's death -- as well as raising discussion on the larger problems surrounding women and violence in China.

On Chinese social media, there was heated debate over how the country's legal system often fails to protect victims while easily pardoning perpetrators of abuse.

Part of the problem, many activists and women said, was the lingering and deep-rooted idea that domestic disputes are a family's private problem -- which can often mean authorities are reluctant to get involved, or that women face social stigma for speaking out.

Until 2001, when China amended its marriage law, abuse wasn't considered grounds for divorce.

China only enacted its first nationwide law prohibiting domestic violence in 2015, a groundbreaking piece of legislation that defines domestic violence for the first time, and includes psychological abuse as well as physical violence.

However, critics say there are still gaps -- it excludes same-sex couples and makes no mention of sexual violence.

After the death sentence was handed down Thursday, one user on the Chinese social media platform Weibo argued that "vague" terms like domestic violence should be dropped from legal cases because it "obfuscates right from wrong" and undermines the severity of the crime.

"Intentional assault is intentional assault, and homicide is homicide, regardless of the relationship between the perpetrator and the victim," said the user, with the comment gaining more than 24,700 likes.

Many others expressed support for Tang's sentence, and generally of China's use of the death penalty, in response to Lhamo's case.

The topics of domestic violence, abuse and dissatisfaction with the system had already been circulating in public discourse when Lhamo's murder occurred, adding to the growing outrage.

Just a few months before her death, China passed a controversial law requiring couples who want to divorce to first undergo a month-long "cooling off" period -- raising concerns it could further endanger victims of abuse and prevent them from leaving a dangerous relationship.