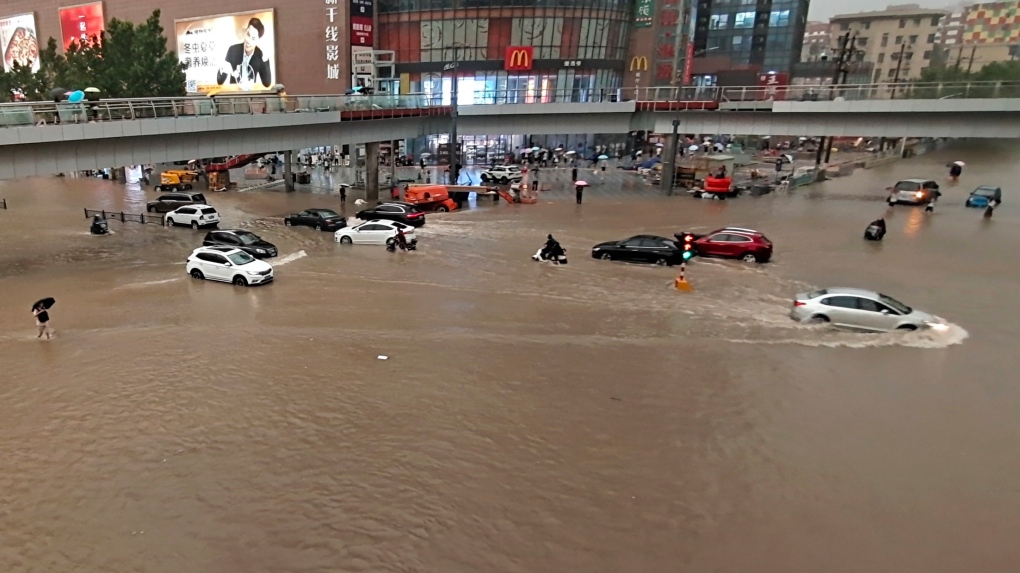 Vehicles are stranded after a heavy downpour in Zhengzhou city, central China's Henan province on Tuesday, July 20, 2021. Heavy flooding has hit central China following unusually heavy rains, with the subway system in the city of Zhengzhou inundated with rushing water. (Chinatopix Via AP)

ZHENGZHOU, CHINA -- A man in central China was rescued after spending three days trapped in a flooded underground garage following torrential rains, while at least four bodies were found after a traffic tunnel was drained, a news report said Saturday.

Meanwhile, rescuers used bulldozers and rubber boats to evacuate residents of areas that still were under water, according to the Shanghai news outlet The Paper.

The rains flooded a Zhengzhou subway tunnel where at least 12 people died, knocked out power to a hospital and other buildings and left streets filled with mud. Dozens of trains in the region were delayed for up to 40 hours.

Li Yongsheng was found Friday afternoon in a garage under the Jincheng International Plaza in Zhengzhou's Jinshui District, The Paper said. It said he was trapped when the garage flooded Tuesday and lay on a ventilation duct surrounded by floating cars.

A photo on The Paper's website showed Li being guided by rescue workers through chest-deep water. It said he was hospitalized with a crush injury.

On Saturday, skies were mostly clear but parts of Zhengzhou and other cities including Hebi, Xinxiang and Anyang still were under water.

In Hebi, rescuers were moving people out of neighbourhoods where water was up to two metres (six feet) deep, The Paper said. It said authorities intentionally flooded parts of Hebi on Saturday afternoon to lower water levels elsewhere.

A video on The Paper's website showed rescuers in boats making their way down streets through waist-deep water.

In Zhengzhou, a city of 12 million people, bodies and more than 200 wrecked cars were found in the Jingguang North Road Tunnel, where water up to 13 metres (43 feet) deep was pumped out, The Paper reported.

Some downtown streets and intersections remained flooded with a few inches of water, in places knee-deep. Crews of emergency workers pumped water, removed debris, and laid sandbags down on pedestrian crossings. Rows of army trucks were parked at some intersections, hung with red banners with slogans like "We must not let up in bringing relief to disaster areas; we must not let up in protecting the people."

Large swaths of the city have resumed normal life, with shoppers thronging upscale shopping malls and the elderly dancing on outdoor plazas.

"For the most part, life has returned back to normal, but there's still some stuff that hasn't," said Li Nana, who had been trapped in her office by the rising floodwaters last week. She said electricity hadn't yet been restored to her home.

Direct economic losses were estimated at 13.9 billion yuan (US$2 billion), according to Xinhua. It said a total of more than 3,800 houses collapsed across the province and 920,000 people were evacuated from their homes.