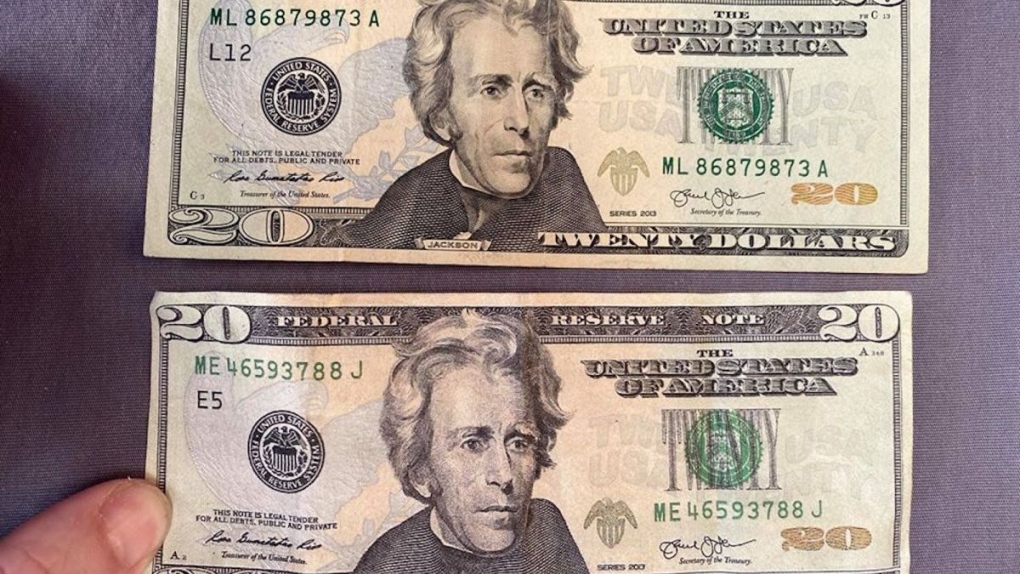 Tiffany Brown compares one of the counterfeit bills she said was used to purchase Girl Scout cookies to a valid $20 bill. (Tiffany Brown/Facebook)

A man in Oregon was arrested after he allegedly used counterfeit money to buy a box of Girl Scout cookies outside of a Walmart, Salem police said.

A mother alerted police February 16 saying her daughter, who had been selling Girl Scout cookies, was given a fake $20 bill to buy a $5 box of cookies, according to a police report.

Tiffany Brown told CNN her 13-year-old daughter, Ava, knew the bill was fake but felt compelled to accept it anyway because she said the man had a large knife on his belt and she was afraid.

"He pays my daughter and walks away pretty quickly and once he's gone, my daughter says, 'Mom, the money isn't real,'" Brown said. "She hands it to me and I look at it and sure enough, it's not real."

Ava told Brown she knew the money was fake because she tried to fold the bill and it wouldn't bend, Brown said.

The following Sunday, a security officer at the Walmart in Salem called police, saying he believed he had located the fraud suspect. The officer said he observed the man taking a jar of hazelnut spread without paying for it and was in the store's bathroom, and that the officer recognized the suspect from surveillance video of the February 16 cookie incident, according to the report.

Camden Ducharme, 35, was arrested and charged with forgery and two counts of third-degree theft Sunday related to both incidents, police records show.

Ducharme could not be reached for comment and it was unclear Thursday whether he has an attorney.

In a statement, the Girl Scouts of the U.S.A. said it was saddened to learn of the incident but proud of the girls for how they handled it.

"We commend Tiffany and her troop for taking smart, swift, and responsible action to ensure the safety of everyone involved," it said.

The Salem Police Department said in mid-February officers responded to two different calls from local Girl Scout troops that were given counterfeit money.

"The suspect used a counterfeit $20 bill to buy one box of cookies and received legitimate currency in change," the police department said in a news release.

Brown said she was aware of the other report and that it involved a different Girl Scout group.

Ducharme was released from jail late Sunday evening, according to police.

And while we're talking counterfeits, check out @USTreasury's helpful info on spotting fake money + checking cash which would be handy for those with #popup sales: https://t.co/gS5vctBkCb. pic.twitter.com/wVPeA1D0aW