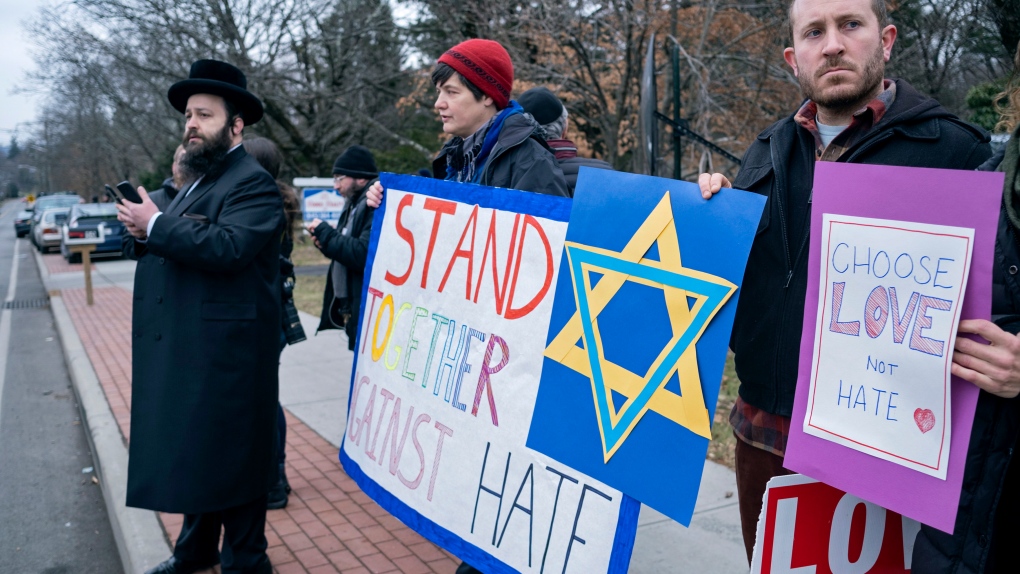 Neighbours gather to show their support of the community near a rabbi's residence in Monsey, N.Y., Sunday, Dec. 29, 2019, following a stabbing Saturday night during a Hanukkah celebration. (AP Photo/Craig Ruttle)

NEW YORK -- A man who was among the five people stabbed during a Hanukkah celebration north of New York City has died three months after the attack, according to an Orthodox Jewish organization and community liaison with a local police department.

Josef Neumann, 72, died Sunday night, the Orthodox Jewish Public Affairs Council said in a tweet. The funeral for Neumann, a father of seven and great-grandfather, will be held Monday. No additional details were provided.

On Dec. 28, an attacker with a machete rushed into a rabbi's home in an Orthodox Jewish community in Monsey, New York, an ambush Gov. Andrew Cuomo called an act of domestic terrorism fueled by intolerance and a "cancer" of growing hatred in America.

Rabbi Yisroel Kahan, who is the community liaison for the Ramapo Police Department that serves Monsey and executive director of Oizrim Jewish Council, shared the news of Neumann's passing on his Twitter account as well.

"We were hoping when he started to open his eyes," Rabbi Yisroel Kahan told The Journal News on Sunday night. "We were hoping and praying he would then pull through. This is so very sad he was killed celebrating Hanukkah with friends just because he was a Jew."

In the days following the attack, Neumann's family said in a statement that the knife penetrated his skull and went directly into his brain, which could have caused permanent brain damage and could leave him partially paralyzed. He also suffered other cuts to the head and neck, and his arm was shattered.

The Hanukkah attack came amid a string of violence that has alarmed Jews in the region.

Federal prosecutors said the man charged in the attack, Grafton Thomas, had handwritten journals containing anti-Semitic comments and a swastika and had researched Adolf Hitler's hatred of Jews online. Thomas' lawyer and relatives said he has struggled for years with mental illness; they said he was raised in a tolerant home and hadn't previously shown any animosity toward Jewish people.

Thomas was indicted on federal hate crime charges as well as state charges, including attempted murder. He has pleaded not guilty to the charges.