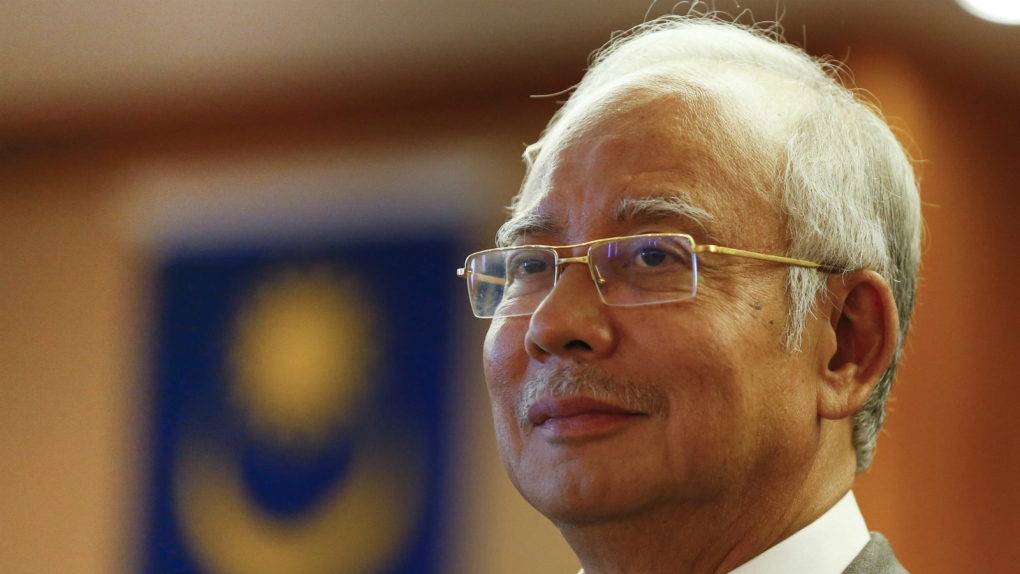 Defence lawyers said Najib was shocked he wasn't acquitted. He will be the first defence witness to take the stand when the trial resumes Dec. 3.

High Court Judge Mohamad Nazlan Mohamad Ghazali said the prosecution had established its case on charges of abuse of power, breach of trust and money laundering. The seven charges relate to 42 million ringgit ($10.1 million) that allegedly went into Najib's bank accounts from SRC International, a former unit of the 1MDB fund.

The judge said it was clear that Najib, who was also finance minister at the time, had "wielded overarching authority and power" in SRC and taken actions for "personal and private interest." He said prosecution had established an "ingredient of dishonesty" in the fund misappropriation.

Najib's top lawyer Muhammad Shafee Abdullah said the judge had chosen a "different interpretation of facts and laws" on the defence arguments. He maintained Najib was a victim of a conspiracy led by fugitive Malaysian financier Low Taek Jho, identified by U.S. investigators as the mastermind in the pilfering of more than $4.5 billion from the fund.

"You will hear the true story from the accused. He has to tell his story, his version of what happened in SRC," Shafee told a news conference. "This is a person who trusted the people around him and these people let him down."

Najib, 66, denies any wrongdoing and accuses Malaysia's new government of seeking political vengeance. The patrician former leader, whose father and uncles were the country's second and third prime ministers respectively, could face years in prison if convicted.

Local media cited Prime Minister Mahathir Mohamad sarcastically reacting to Najib's expectation of an acquittal. "I am shocked that he is shocked," said Mahathir, whose government ousted Najib's after campaigning on anti-corruption platform. Mahathir said the trial took many months and was handled according to the rule of law.

Shafee said whatever verdict is reached, both sides will appeal until the case reaches the top court. It could last many years, "well beyond the next election," due in 2023, he said.

Najib is also charged in four other cases over 1MDB corruption that led to investigations in the U.S. and several countries. His wife, several officials from his government, and the U.S. bank Goldman Sachs also face charges related to the scandal.

Monday's ruling was seen as a key test for the legal system and the credibility of Mahathir's government. Its victory in the May 2018 elections led to Malaysia's first change of government since independence from Britain in 1957.

Mahathir, 94, was premier for 22 years until his retirement in 2003 but made a political comeback amid anger over the 1MDB scandal. His government soon reopened 1MDB investigations that had been quashed under Najib.

U.S. investigators say money stolen from 1MDB was laundered through layers of bank accounts in the U.S. and other countries to finance Hollywood films and buy hotels, a luxury yacht, art works, jewelry and other extravagances. More than $700 million from the fund allegedly landed in Najib's bank account.

In all, Najib faces 42 charges of criminal breach of trust, graft, abuse of power and money laundering in the five criminal cases.

Shafee said Monday's ruling isn't likely to affect Najib's ongoing second trial, where he faces 25 counts of graft for allegedly receiving and using more than $731 million from 1MDB between 2011 and 2014.

He said a U.S. settlement deal last month with financier Low Taek Jho, better known as Jho Low, that will allow the Justice Department to recover almost $1 billion stolen from 1MDB would bolster Najib's case that he was misled by Low. Low, who faces charges in Malaysia and the U.S., is still in hiding.

"You must draw the line between naive, too trusting or even negligence as opposed to having the intention to commit crime," he said of Najib.