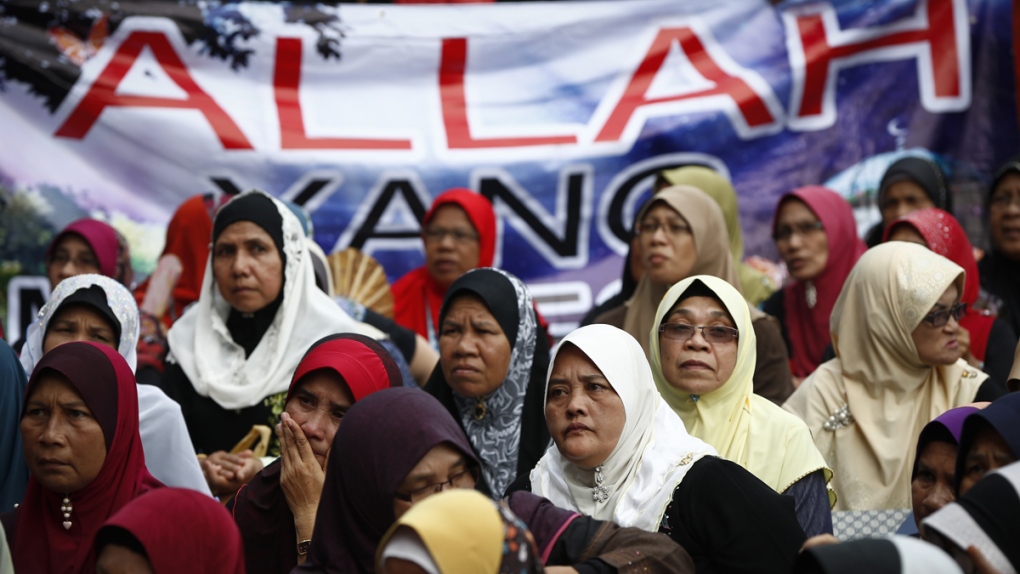 Muslim women sit in front of a banner reading "Allah" during a protest outside the Court of Appeal in Putrajaya, outside Kuala Lumpur, Malaysia, Monday, June 23, 2014. (AP / Vincent Thian)

KUALA LUMPUR, Malaysia -- Malaysia's top court weighed in Monday on the country's longstanding fight over the word "Allah," saying non-Muslims cannot use it to refer to God. But the government said hours later the judgment applied only to one newspaper at the centre of the case, adding still more confusion to a deeply divisive debate over religious freedom in the Muslim-majority country.

In a 4-3 ruling, the Federal Court upheld a government ban on the use of the word Allah by non-Muslims in a case against The Herald, a Catholic Malay-language weekly. The court did not elaborate on the implication of its ruling, but the government issued a tersely worded statement saying it only applied to The Herald and that Malaysian Christians can still use the word Allah in churches.

The government statement appeared to be an attempt to diffuse tensions in the nation of 29 million people, including a large non-Muslim minority that has often complained that it is treated unfairly in jobs and education and is denied full freedom of religion.

Government officials declined to clarify whether the ban would apply to Bibles and other published texts, as appeared to be the case in last year's ruling by the Court of Appeals that banned The Herald from using Allah. The church had asked the Federal Court to overturn the ban, but the court decided not to hear the challenge, declaring that the lower court's decision had been correct.

Earlier this year, 300 Malay-language Bibles containing the word Allah were seized by Islamic authorities from the office of a Christian group.

"We are disappointed. The four judges who denied us the right to appeal did not touch on fundamental basic rights of minorities," said the Rev. Lawrence Andrew, editor of The Herald.

He said the ruling would have a chilling effect on the freedom of religion guaranteed in the constitution.

"It will confine the freedom of worship," he said. "We are a minority in this country, and when our rights are curtailed, people feel it."

The law doesn't clearly stipulate the penalty for violating the ban, but it appears that a newspaper using the term would lose its publishing license.

The government says Allah should be reserved exclusively for Muslims, who account for nearly two-thirds of the population, arguing that if other religions use the term, it could confuse Muslims and lead them to convert away from Islam.

Christian leaders deny this, arguing that the ban is unreasonable because Christians who speak the Malay language have long used the word in their Bibles, prayers and songs. Christians make up about 9 per cent of the population.

"This is a sad state of affairs that shows how far and fast religious tolerance is falling in Malaysia," said Phil Robertson, a spokesman for New York-based Human Rights Watch. "The Malaysian government should be working to promote freedom of religion rather politically exploiting religious wedge issues."

The controversy has provoked violence in Malaysia.

Anger over a lower court ruling against the government ban in 2009 led to a string of arson attacks and vandalism at churches and other places of worship. The 2013 judgment by the Court of Appeals reversed that decision.

An umbrella group of Catholic, Protestant and Orthodox churches in Malaysia said Christians will continue to use the word Allah in their Bibles and worship, saying the court ruling was only confined to the Catholic newspaper.

"We maintain that the Christian community continues to have the right to use the word 'Allah' in our Bibles, church services and Christian gatherings," the Rev. Eu Hong Seng, chairman of the Christian Federation of Malaysia, said in a statement.

Defence Minister Hishammuddin Hussein told reporters he welcomed the ruling, but said he hoped no groups would politicize the matter and use it to divide races.

"This is an emotional issue that can affect the country's (racial) harmony. We must handle it with wisdom," he said. "The court has made a decision, so let's accept it."

Some experts believe the Allah issue is an attempt by Prime Minister Najib Razak's ruling Malay party to strengthen its conservative Muslim voter base. Religion has become an easy tool because government policies have made Islam and Malay identity inseparable.

"This is a situation that is peculiar to Malaysia. It is tied to politics and the identity of Malays. It is a bending of the interpretation of Islam to suit Malay politics and Malay interests," said Ibrahim Suffian, who heads the Merdeka Center opinion research company.

The issue hasn't surfaced in other Muslim-majority nations with sizeable Christian minorities.

In Egypt, where at least 10 per cent of the population is Christian, both Muslims and Christians refer to God as Allah, and this hasn't generated any controversy or antagonism. Christians often refer to God as "al-Rab" in their liturgy, but use Allah more frequently in their daily life.

The same is true for Indonesia, the world's most populous Muslim nation. Both groups use Allah -- although Christians pronounce it "Al-lah" and Muslims say "Al-loh," -- and this hasn't caused friction.