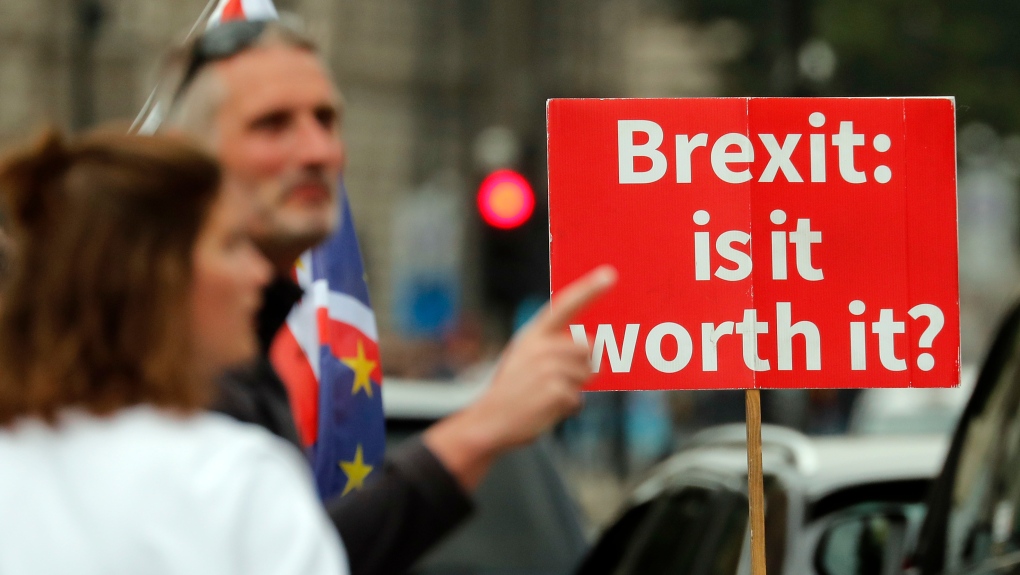 Protestors put up a poster in front of the Houses of Parliament in London, Tuesday, Sept. 4, 2018. (AP Photo/Frank Augstein)

LONDON -- One of Britain's biggest trade unions on Tuesday joined calls for a new public vote on leaving the European Union, saying voters were misled during the 2016 referendum campaign.

The GMB union, which has more than 600,000 members, said "the promises that were made during the referendum campaign are simply not the reality we are facing."

In a video statement, GMB General Secretary Tim Roache says the union's members in manufacturing, retail and other sectors face uncertainty because the British government has yet to negotiate a deal with the EU.

The union says Britons voted to leave the EU, but they "did not vote for economic chaos or to put jobs and hard-won rights on the line," and voters should be able to accept or reject the final Brexit deal.

With less than seven months to go until Britain leaves the EU, the two sides have yet to strike a deal on divorce terms and future trade, and Prime Minister Theresa May's Conservative government remains split over how close a relationship to seek with the bloc.

May wants to keep the U.K. aligned to EU regulations in return for free trade in goods. But her plan has infuriated Conservative supporters of a clean-break Brexit, who say it would prevent the U.K. from striking new trade deals around the world.

EU leaders, meanwhile, say May's plan smacks of "cherry picking" benefits of membership in the bloc without the cost or responsibilities.

Britain and the EU had hoped to hammer out an agreement on divorce terms and the outlines of future trade by October so that it can be approved by individual EU countries before the U.K. leaves the bloc on March 29. Both sides now say that deadline may slip to November or later.

U.K. Brexit Secretary Dominic Raab insisted Tuesday that a deal was "within our sights."

Raab told lawmakers in the House of Commons that the two sides had "injected some additional pace and intensity into the negotiations as we reach the final phases."

But Labour Party Brexit spokesman Keir Starmer said the negotiations were "in serious trouble" and that the government had no strategy except "to plow on regardless."

"The government has got six weeks to get this right," Starmer said. "More of the same will not do."

With the clock ticking, the British government has ramped up planning for a "no deal" Brexit, amid warnings from businesses that such an outcome could cause economic mayhem.

In a move that may give the markets a measure of reassurance, Bank of England Governor Mark Carney said Tuesday that he was talking to the government about extending his term in office to help oversee a smooth Brexit.

Carney is due to leave the helm of the central bank in June after six years, but told a committee of lawmakers he was "willing to do whatever else I can in order to promote both a smooth Brexit and effective transition at the Bank of England."

Carney said he expected the government to make an announcement "in due course."

Pan Pylas contributed to this story.

Today our General Secretary Tim Roache calls on the Prime Minister to give the British public the final say on the Brexit deal. pic.twitter.com/gA9kuj66we