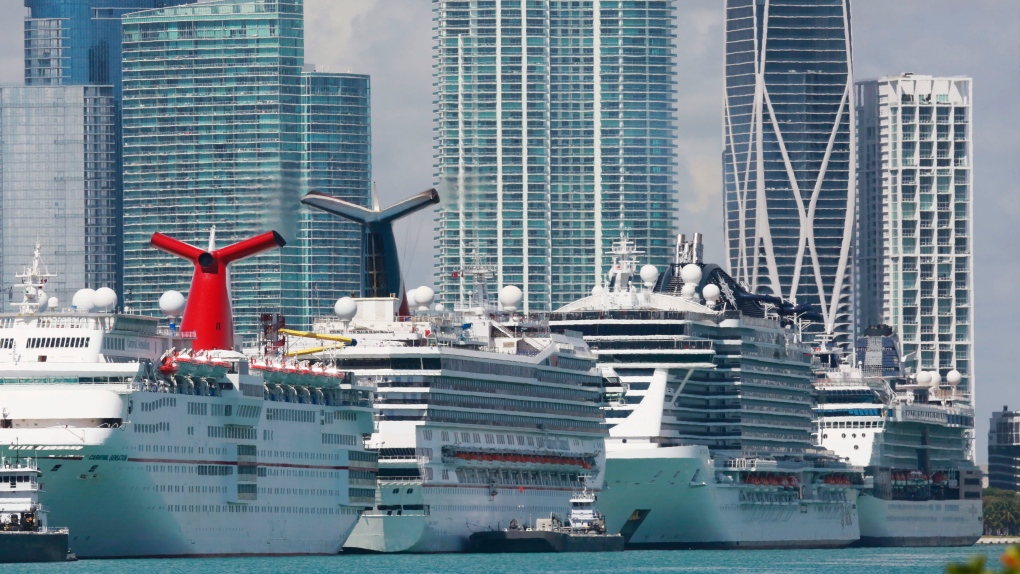 International and national cruise ships docked at PortMiami amid the virus outbreak on March 14, 2020 in Miami. President Donald Trump tweeted yesterday that at his request Carnival, Royal Caribbean, Norwegian, and MSC have all agreed to suspend outbound cruises as the world tries to contain the COVID-19 outbreak. A on Saturday, March 14, 2020, in Miami. For most people, the new coronavirus causes only mild or moderate symptoms. For some it can cause more severe illness. (AP Photo/Brynn Anderson)

Florida's new law prohibiting businesses from asking whether employees or customers have been vaccinated against COVID-19 may take a toll on its cruise business.

The CEO of Norwegian Cruise Line Holdings Ltd. said Thursday it could cause the company to suspend Florida departures and move its ships elsewhere.

"At the end of the day, cruise ships have motors, propellers and rudders, and God forbid we can't operate in the state of Florida for whatever reason, then there are other states that we do operate from, and we can operate from the Caribbean for a ship that otherwise would have gone to Florida," CEO Frank Del Rio said during the company's quarterly earnings call.

Florida Governor Ron DeSantis signed an executive order last month banning the use of COVID-19 passports in the state. The order prohibited any government entity from issuing vaccine passports and blocks businesses from requiring any such documentation. Senate Bill 2006 was signed into law Monday making that executive order official.

"In Florida, your personal choice regarding vaccinations will be protected and no business or government entity will be able to deny you services based on your decision," DeSantis said.

The Centers for Disease Control and Prevention this week announced guidelines for trial cruises with volunteer passengers to test safety measures, which will be required for each ship before resuming regular passenger voyages in US waters.

To bypass the trial cruises, the CDC says at least 98% of crew members and 95 per cent of passengers must have been vaccinated.

Del Rio says he hopes the CDC's conditions will override the governor's action when it comes to the cruise industry, although he said he was "disappointed at first read" of the agency's proposal for resuming cruise operations.

"It is a classic state versus federal government issue," said Del Rio. "Lawyers believe that federal law applies." He added that the company has been in talks with the governor's office but did not specify what was discussed.

Norwegian Cruise Line had previously hoped to resume cruises on July 4, and said it was willing to require all passengers and staff to be vaccinated in order to gain CDC approval.

"It was possible back in early April when we proposed to the CDC 100 per cent vaccination. We've always said it takes about 90 days to stand up a vessel," he said. So the cruise line is now looking at August at the earliest.

Whether Norwegian decides to operate in Florida or not, it and other cruise companies will have to meet the CDC requirements before setting sail from US ports.

DeSantis had earlier cited freedom and privacy concerns as the primary basis for his executive order, arguing that the implementation and enforcement of vaccine passports would "create two classes of citizens based on vaccinations."

His order had noted that many Floridians have not yet had the opportunity to obtain a vaccine, while some may have infection-acquired immunity, and other people may be unable to get a COVID-19 vaccine because of health, religious or other reasons.

"Individual COVID-19 vaccination records are private health information and should not be shared by a mandate," DeSantis' executive order had read.

But, Del Rio's company plans to stick to vaccination requirements. "At least in the beginning, 100% of our guests and our crew will be vaccinated," Del Rio said. "I think everyone should be wanting to start cruising in the safest possible manner."

Representatives for the company and DeSantis did not immediately return messages from CNN for comment on Thursday night.