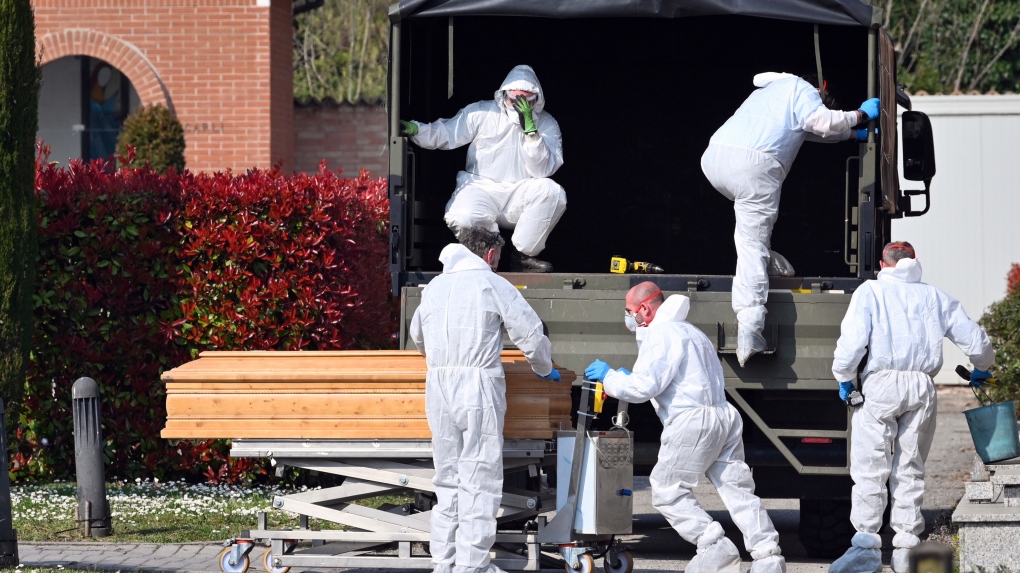 FILE - In this March 21, 2020 file photo, coffins are downloaded at the Ferrara cemetery, northern Italy, from a military convoy coming from Bergamo, a city at the epicenter of the coronavirus outbreak in northern Italy. (Massimo Paolone/LaPresse via AP, file)

ROME, ITALY -- As Italy mourns thousands of coronavirus dead, and survivors brace for life in an economic wasteland, one rung of society looks to win big: organized crime.

Over 10,000 people have died in Italy of the flu-like disease, which has forced the country into a lockdown that is devastating the eurozone's third largest economy.

From the historic Cosa Nostra in Sicily, to the immensely powerful 'Ndrangheta in Calabria and trigger-happy Camorra in Naples, Italy's mafias were "caught on the back foot (by the virus), but are now organizing themselves," Governale said.

The Economist Intelligence Unit said Thursday it expected Italy's GDP to contract by a colossal seven percent for the year. Italian experts say some 65 percent of Italian small and medium businesses are at risk of bankruptcy.

That is music to the ears of the country's mobs, who use extortion and usuary to feast on ailing businesses.

"Just look at the portfolio of the mafias, to see how much they can earn from this pandemic," Italian anti-mafia author Roberto Saviano said in an interview in the Repubblica daily this week.

"The mafias know what you have, and will need, and they give it, and will give it, on their own terms."

Saviano pointed to the last big epidemic in Italy, the 1884 Cholera outbreak in Naples, which killed more than half of the city's inhabitants.

The government paid out vast sums for a clean-up -- which went straight into the pockets of the Camorra.

The mafia "is already carefully planning ahead to when the economy will start to be rebuilt," said Governale, who heads up Italy's anti-mafia investigation directorate (DIA).

"There will be a lot of money going around."

The 62-year old Sicilian said his team was preparing a plan to combat mafia infiltration.

"They will be looking for loopholes in the system. We'll have to keep our eyes open for... suspicious operations, the creation of new companies, dummy corporations."

Giuseppe Pignatone, a former mafia-hunter in Reggio Calabria, said the epidemic would "inevitably make the judiciary's job more difficult over the coming weeks and years".

The trials of hundreds of defendants have ground to a halt.

The redirection of police resources over the crisis could also contribute to the mafia blossoming, as officers "already weighed down by new roles may have to face public order problems," he said.

According to the Stampa daily, Italy's secret service has warned the government of potential riots in southern Italy -- fomented by organized crime groups -- should the virus epicentre move from north to south.

Mobsters were believed by some crime experts to have orchestrated revolts in jails across the country early on in the epidemic, with prisoners fearful of catching the disease in overcrowded facilities demanding early release.

"Very worryingly, some with lighter sentences are being allowed out," Nicola Gratteri, a leading prosecutor in the 'Ndrangheta stronghold of Calabria, told AFP.

Rights group Antigone said over 2,500 prisoners had been released since February 29 to ease overcrowding.

"People linked to the 'Ndrangheta have already been released and put under house arrest," he said.

"That presents a real danger".