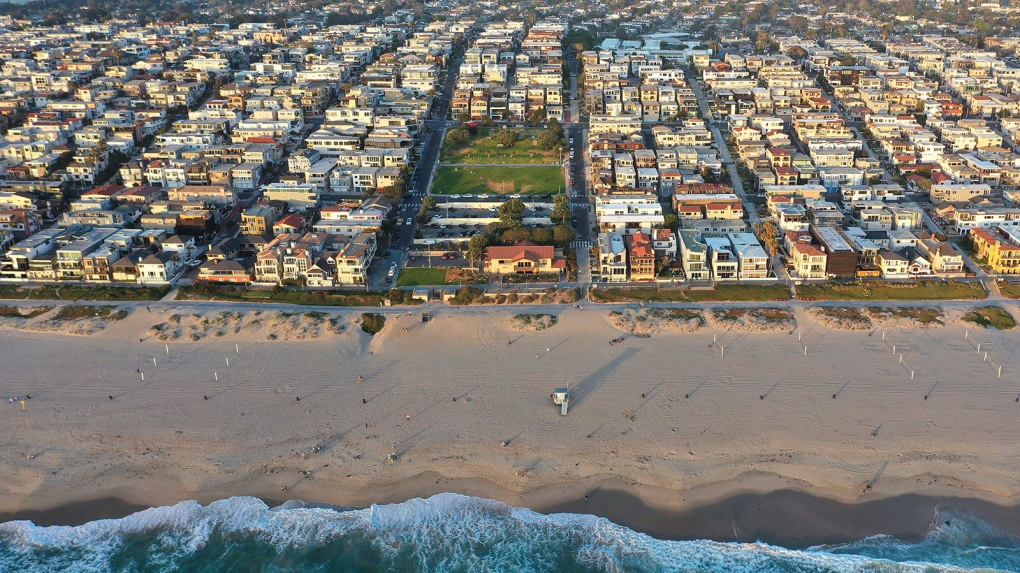 A plan to return a stretch of Southern California beachfront real estate, pictured here, on April 19, 2021, to the descendants of its Black owners, nearly a century after it was taken by the city of Manhattan Beach, is scheduled for a vote by the Los Angeles County Board of Supervisors. (Mario Tama/Getty Images)

A stretch of prime Southern California beachfront real estate was returned to the descendants of its Black owners Tuesday, nearly a century after the parcel was taken by the city of Manhattan Beach.

The Los Angeles County Board of Supervisors voted unanimously to give the land back to the family of the owners, Charles and Willa Bruce.

Known as Bruce's Beach, the resort had offered Black families a place to enjoy the California life and was a labor of love for the couple. They purchased the land in 1912 for $1,225 and built several facilities, including a cafe and changing rooms.

But harassment from White neighbors and the Ku Klux Klan tore away at their dreams.

The final blow came in 1924 when the city took the property through eminent domain and paid the couple a fraction of what they asked for. The city wanted the land for a park.

The property -- now estimated to be worth $20 million -- was transferred to Los Angeles County in 1995. The houses directly next to the property have price tags of around $7 million each.

Last year, Gov. Gavin Newsom signed legislation that would enable the county to return the beachfront property to their descendants.

The new law was authored by Sen. Steve Bradford, who sits on the state's newly formed reparations task force.

"This is what reparations look like," said Bradford, insisting that the county is not giving anything to the Bruce family, yet simply returning their stolen property.

Tuesday's vote finalized a proposal presented by Holly Mitchell, chair of the county board of supervisors, to give back the stretch of land that is now a park with a lawn and lifeguard training facility. "We are not returning this land; we are giving it back to its rightful owners," Mitchell said, calling it "a historic moment for our county."

The vote outlined plans to release the beachfront property back to the Bruce family. County officials will rent the property from the Bruces under a 24-month lease agreement totaling $413,000 per year to maintain the facility.

"All the terror that is still in our hearts regarding these criminal acts that were perpetrated against innocent people of our family, it's important for people to understand, more so than the money that was lost. We lost our family to this," family spokesperson Duane Yellow Feather Shepard told CNN's Stephanie Elam.

"This is one step toward justice" he added.

County Supervisor Janice Hahn, who worked on the motion with Mitchell, held back tears as she told the board, "This will be one of the most important things I have ever done."

The decision was the result of a two-year effort by the grassroots movement, Justice for Bruce's Beach.

Kavon Ward, founder of Justice for Bruce's Beach, told CNN the decision Tuesday was the fulfillment of her dream to see the land returned.

"I feel some sense of peace. I feel joy. I feel honored that the most high would use me as a vessel to help make this happen, to be the catalyst for this happening," she said.

A B.C. Mountie who was fired after showing a domestic violence victim what he described as a barely clothed "d*** pic" was rehired last year after arguing the RCMP's conduct board treated him unfairly.

Gangster's execution outside of a busy Vancouver restaurant was carefully planned: court documents

The man who killed Harpreet Singh Dhaliwal outside of a busy Vancouver restaurant last year planned the killing for weeks, setting up in an Airbnb to 'track down' the victim 'for the purpose of killing him,' court documents say.