London skyscraper accused of melting a car to get permanent sunshade 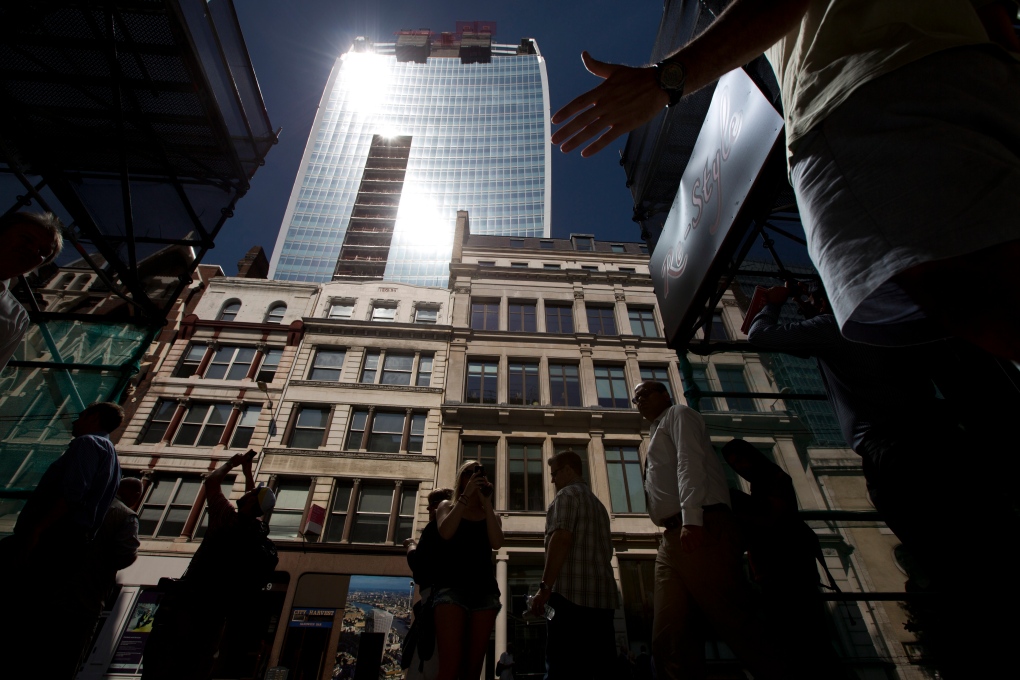 In this Thursday, Sept. 5, 2013 file photo, intense sunlight reflects down towards street level off the 37-storey skyscraper at 20 Fenchurch Street in the City of London. A London skyscraper which drew ire for having a glare so strong it melted nearby cars and shops will get a permanent fix. (AP Photo/Matt Dunham, File)

LONDON -- A London skyscraper that drew ire for having a glare so strong it melted nearby cars and shops will get a permanent fix.

The offending tower -- known as the Walkie-Talkie for its curved, bulging shape -- is to have a sunshade attached to its south-facing facade to stop the concave surface from reflecting sunlight and beaming concentrated rays to a nearby street, developers said Thursday.

The 37-story building made headlines in September when a Jaguar owner who parked his car at its foot complained that the solar glare melted part of the vehicle. Local shopkeepers also said the beams -- dubbed "death rays" by the British press -- blistered paintwork and burnt a hole in a floor mat during the hottest parts of the day.

Developers Land Securities and Canary Wharf had put up a dark netted screen as a temporary measure. They now say they have received permission to erect a permanent sunshade of horizontal aluminum fins, which they say will solve the problem by absorbing and diffusing sunlight.

The sunshade will cover much of the Walkie-Talkie's southern face, and will inevitably block the Thames views for the tower's occupants "to a limited extent," the developers said. But they added that "the extra texture, detail and reduction in reflectivity will make the building a better neighbour."

It wasn't the first time that the skyscraper, designed by architect Rafael Vinoly and officially known as 20 Fenchurch Street, attracted controversy. Even before it was built, UNESCO, the United Nations heritage body, complained that tall buildings like it would negatively impact the historic Tower of London nearby.