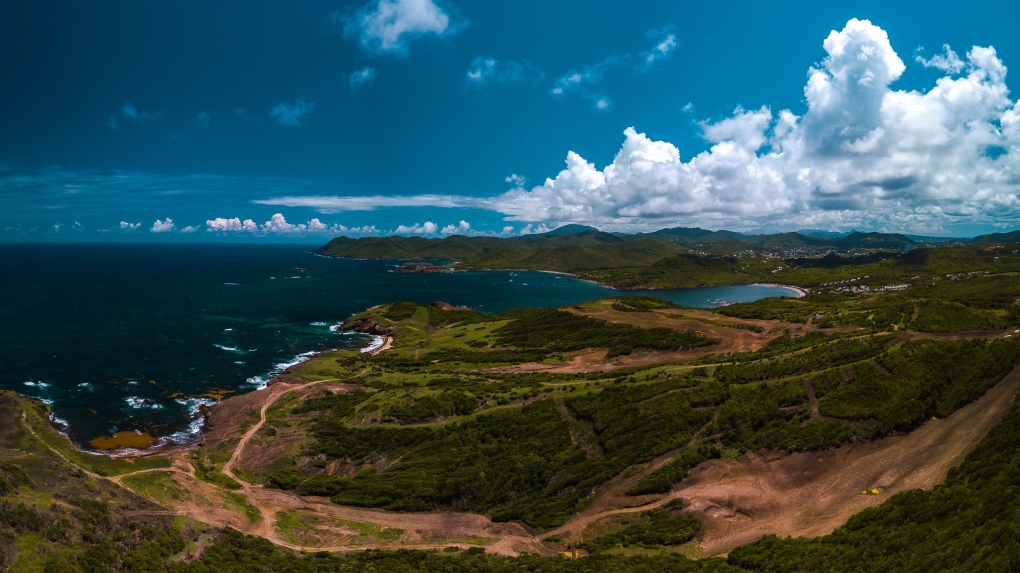 TORONTO -- Local advocates in St. Lucia are concerned about the preservation of an Indigenous burial site and the lands surrounding it due to the construction of a sprawling luxury golf resort by the team of developers behind two famed courses in Nova Scotia.

Construction is already underway for the resort, which will be Cabot’s first golf course outside of Canada. Two of the development’s principal investors, Canadian Ben Cowan-Dewar and American Mike Keiser, were co-founders of the award-winning Cabot Links and Cabot Cliffs courses in Cape Breton, N.S.

While Cabot Saint Lucia’s newly appointed CEO Kristine Thompson said the response in St. Lucia to the project has been “overwhelmingly positive,” some local advocates are expressing opposition to it because of its location on an Indigenous burial site, its proximity to several public beaches, and its potential environmental impact.

The Indigenous burial site was discovered in January 2009, after increased tourism, natural erosion, and 2007’s Hurricane Dean exposed skulls, bones, and other artifacts from an early Indigenous settlement in the soil.

Dutch archeologist Corinne Hofman and a team of researchers uncovered the burial site when they travelled to St. Lucia to excavate the remains and preserve them. She said they found 52 burial sites containing human remains dating from approximately AD 1100 to AD 1500, with the majority of them from between AD 1200 and AD 1300.

While the remains they recovered in 2009 are currently being preserved at a facility in St. Lucia, Hofman believes there could be more bones in the area.

“That is absolutely possible,” she told CTVNews.ca during a telephone from the Netherlands on Saturday. “Our mission was really to rescue what came to the surface and that was already a lot.”

Laurent Jean Pierre, a member of the St. Lucia Archaeological and Historical Society (A&H) who has Black and Indigenous heritage, said he too is convinced there are more remains at the site.

“There remains much more to be to be discovered because you’ve just touched the surface of the site,” he shared during a telephone interview with CTVNews.ca from the island’s capital of Castries on Friday. “I will still find artifacts after heavy rain.”

Hofman, a professor of Caribbean archeology at Leiden University who has conducted excavations in the region for more than 30 years, said what’s happening in Cap Estate is nothing new. She said she’s witnessed the construction of “a lot” of luxury developments on unprotected Indigenous lands throughout the Caribbean.

“The history is destroyed and fades away. And it’s an undocumented history because, of course, the Indigenous peoples, we do not have any written sources from them,” she explained. “The only thing to know something about their history is to excavate. The soil is in effect our book.”

Jean Pierre said the government was slow to include the Indigenous burial site officially in its parks and protected areas program.

“It was not ratified,” he said. “Governments, they’re slow. It’s not a priority kind of thing. It’s really environmentalists and the descendants who are mixed African and Aboriginal blood (who) are the ones who are very concerned about our heritage.”

CTVNews.ca sent multiple requests for comment to the St. Lucian government that went unanswered by the time of publication.

In an emailed statement on Friday, Thompson said Cabot will halt construction of the golf course and civil infrastructure that is currently underway on the lands surrounding the burial site if workers come across any more remains.

“Any activity will immediately be stopped if remains are found, until such time as a representative from the Archaeological and Historical Society comes to the site to remove the remains,” she said.

Despite Cabot’s assurances that remains from the Indigenous settlement will be protected, Akim Larcher, a writer and activist with dual Canadian and St. Lucian citizenship, said there needs to be people with archeological expertise on the ground during the construction process.

“You can't ask an excavator who’s going across the land to look out for bones,” he said during a telephone interview with CTVNews.ca from his home in Montreal on Saturday.

“They’re leaving it in the hands of local companies that are just hired to clear land and they don’t have the expertise.”

The company’s process of acquiring approvals and permits for the development has also rubbed some opponents the wrong way.

Calixte George Jr., an elected board member of Saint Lucia National Trust, said Cabot began clearing land for the resort in the last quarter of 2019 before they had conducted their own Environmental Impact Assessment (EIA).

The Saint Lucia National Trust is an organization, created by the government in 1975, tasked with conserving the natural and cultural heritage of the country by consulting on land developments on the island.

George Jr. said, for its building permit application, Cabot relied on a 2007 EIA conducted for another proposed resort development that never came to fruition. He said the application was approved by the St. Lucian government’s Development Control Authority (DCA), which is responsible for issuing permits for land development.

In her email, Thompson said Cabot is just completing an updated EIA, which was requested by the DCA. She said the EIA will be submitted this week and will address the management of archeological remains.

CTVNews.ca sent multiple emails to the DCA that went unanswered by the time of publication.

George Jr. said an up-to-date EIA should have been submitted before construction began and now it’s too late to know if there was any damage to the area that has already been cleared for the golf course.

Thompson, on the other hand, said the burial site itself remains “completely untouched” and they will leave it that way until they receive feedback from the DCA.

In defence of the development, St. Lucian Prime Minister Allen Chastanet said in a statement on Facebook in late September that Cabot has “committed to working with the relevant agencies to preserve historical and archaeological finds in the area and stands ready to enter into an agreement with the Government of Saint Lucia or its assigns on this.”

Reaction to the Cabot Saint Lucia development has been mixed among locals on the island, according to George Jr., with some welcoming its promise of tourism dollars and the creation of 200 construction jobs, as well as 500 eventual jobs at the resort.

“We continue to appreciate the beauty of both Saint Lucia and the people who call it home and know from our interactions with those in the community there is great excitement for the project,” Thompson said in her email.

George Jr., however, said there has been public outcry about the project for several reasons beyond the Indigenous burial site. He said some people are unhappy that the St. Lucian government gave Cabot a US$10 million loan from the island’s National Pension Fund to purchase the land for the development.

“That caused quite a bit of a furor in the community,” he said. “This whole idea that this development was going on and, of course, it was being funded by, effectively, by the government.”

The prime minster addressed St. Lucians’ concerns about the pension fund in his Facebook statement, in which he said the loan to Cabot is 100 per cent secured by the land the project sits on.

“If Cabot were to default on the loan repayment, NIC [St. Lucia National Insurance Corporation] would own the 360 acres,” he said.

While the loan is secured, George Jr. described it as “unprecedented” for the country and called it “strange” that a company backed by a billionaire investor, Mike Keiser, would require a loan in the first place.

“If it was foreign direct investment, one would expect that the developer would be the one bringing their own capital,” he said.

In addition to the controversy over the loan, George Jr., Jean Pierre and Larcher said people in the community are worried the resort will restrict their access to several beaches on the peninsula’s coast.

Under St. Lucian law, all beaches are open to the public and must remain accessible.

Both Thompson and Chastanet have stressed that the beaches neighbouring the Cabot Saint Lucia development will remain open to the public.

“Cabot Saint Lucia has committed to enhancing the existing beach experience with improved vehicular access for Saint Lucians, along with the construction of new public facilities that include accessible washrooms and changing rooms, neither of which currently exist,” Thompson said.

Despite these promises, the local advocates said the island’s residents often feel intimidated or uncomfortable when they visit beaches where tourist hotels and resorts have been built. Larcher said these companies won’t prevent people from going to the beach, but they often install security guards, pillars, umbrellas, and beach chairs that make it more difficult for locals to enjoy the beach.

“The mere fact of doing that makes it uncomfortable for persons who are nationals or locals. So the principle of beach access is lost,” Larcher said.

George Jr. said some of the beaches near the Cabot project are used by local residents for fishing, kite surfing, swimming, walking trails, and horseback riding. He said his St. Lucia National Trust organization met with Cabot officials on Friday to discuss the creation of a coastal trail that would allow easy access to the region’s beaches.

“They’ve [Cabot] promised that we would be able to get a sit down with the designers of the golf course, especially in terms of the trail, and including the trail in the design,” he said.

George Jr. said he’s hopeful the company will take into consideration his group’s recommendations, but he acknowledged they are only an advocacy group and that it’s up to the DCA to insist on these requests.

Finally, Jean Pierre said he is particularly worried about the project’s environmental impact on an arid part of the island nicknamed “Cacti Valley” that he said is home to the country’s highest concentration of cacti, including some very rare species.

“It was like a living laboratory where people could learn about themselves and the burial sites, the first people and all of that in one spot, lush, beautiful landscape, immaculate beauty,” he said. “Now they've come and taken over the coastline, and what’s more painful, our government gave them the money to buy the land.”

In response to these concerns, Thompson said Cabot is committed to “exceeding” the environmental standards required for golf course construction and development in St. Lucia. She also said they will not tap into the region’s water utility and they plan to use alternatives, such as effluent and desalinated seawater.

Similarly, Chastanet defended Cabot’s “strong track record” of ensuring environmental protection and said the company has been certified for doing so by the Audubon Certified Cooperative Sanctuary for Golf.

For Larcher, the Cabot Saint Lucia project is emblematic of the larger issues Canadians face at home, such as Indigenous land access and environmental protection.

“It’s about the land that we use, it’s about access to beaches, it’s about Indigenous land, and a burial ground that's being devastated,” he said.