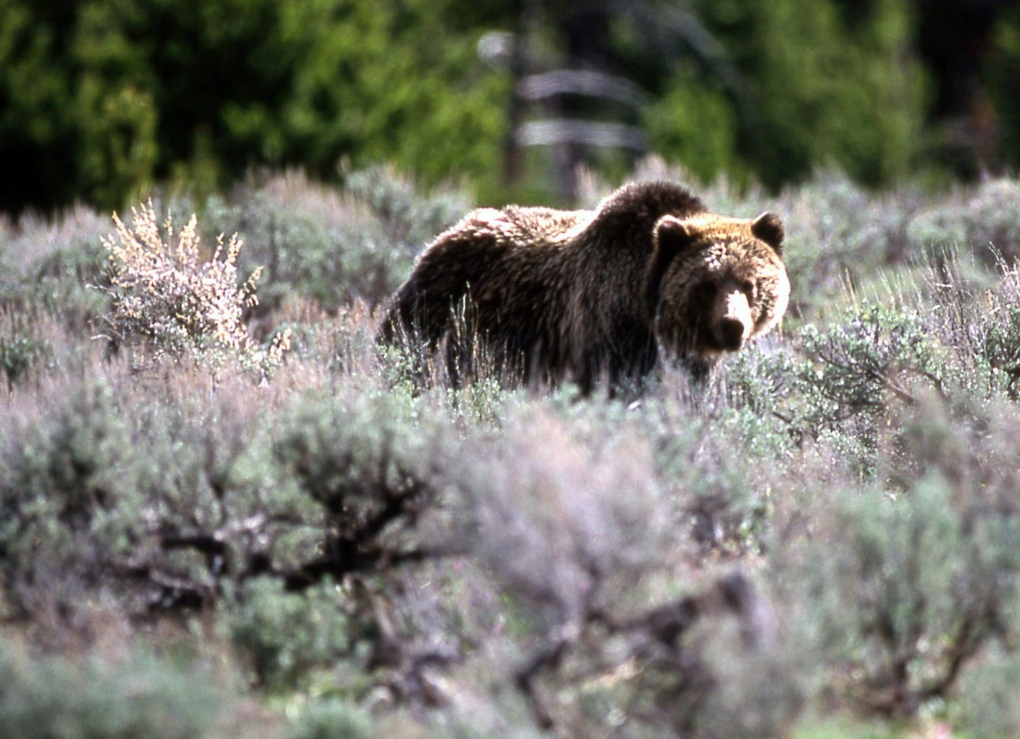 In this file photo, a grizzly bear is shown passing through a meadow in Yellowstone National Park, Mont., in June 2002. (AP / National Park Service)

Warning: The video included in this story contains offensive language and images that may be distressing to some readers.

It takes more than a grizzly bear to kill Todd Orr.

The American man survived not one, but two bear attacks while hiking in Montana over the weekend, in an incident documented on Facebook that has since gone viral.

Orr briefly explained the attack and showed off his bloody injuries in a video posted to his Facebook page over the weekend, which has garnered more than 20 million in its first few days. He says the video was recorded shortly after he finished a five-kilometre hike back to his truck from the site of the encounter.

Orr appears in the video with blood streaked across his face from a nasty five-inch gash along the side of his head. His shirt is also bloodied, and there's a bloody hole in his left forearm from what he says was a bear bite.

"Life sucks in bear country," Orr says in the video. "She got my head good – I don't know what's under my hat – my ear, my arm… And then my shoulder, it's ripped up."

The U.S. Forest Service has confirmed that a bear attack took place in the area on Saturday.

Orr, who works at a knife store, describes the attack in much greater detail in a separate, written Facebook post. He says he first encountered the mother grizzly and its two cubs in an open meadow near the North Fork of – wait for it – Bear Creek, in the Madison Valley of Montana. He was scouting for elk at the time, but taking precautions to avoid surprising a bear, calling out "hey bear" every 30 seconds.

Orr spotted the bears in the meadow shortly after he called out, and at first, his shouting appeared to have scared the animals off. "But suddenly she turned and charged straight my way," he wrote. Orr says he yelled to try to scare the animal, then whipped out his bear spray and blasted the grizzly with it from a distance of approximately 7.5 metres. "Her momentum carried her right through the orange mist and on me," he wrote.

Orr hit the ground under the bear's weight and rolled onto his stomach, burying his face in the dirt and covering his head and neck with his arms. "She was on top of me biting my arms, shoulders and backpack," he wrote. "The force of each bite was like a sledgehammer with teeth."

He said the bear kept biting him for a few minutes, then seemed to disappear. Injured but still able to stand, Orr started jogging as fast as he could back to his truck, without stopping even to dress his wounds. "I wanted to keep moving and put distance between us," he wrote.

But Orr wasn't out of the woods yet.

After 5-10 minutes, Orr said a bear emerged onto the path behind him and came at him once more. He dropped to the ground in the same defensive position, and the bear started tearing into him yet again, causing more damage this time. The bear tore his backpack off, and bit deep into his arm, rendering it numb and useless. He said the bear delivered "another couple bites to my head and a gash opened above my ear, nearly scalping me."

Orr thought the bear would strike an artery with its bites, and he'd be left to bleed out on the trail. "I thought this was the end," he said.

After several vicious bites, the bear stood on top of Orr for what he estimates was 30 seconds. "For 30 seconds she stood there crushing me… and then she was gone."

Orr waited in silence for a few minutes, then gathered up his scattered belongings, including a pistol, and hurried back to his truck with no further incident.

He was treated in hospital for several nasty cuts and a chipped bone in his forearm, though he says he considers himself lucky that his injuries were not worse. Orr credited his backpack for protecting his back and spine from a potentially crippling injury.

He added that he still has to clean out his truck from all the blood he lost while driving to the hospital.

"My girlfriend says it looks like I gutted an elk in the driver's seat," he said.