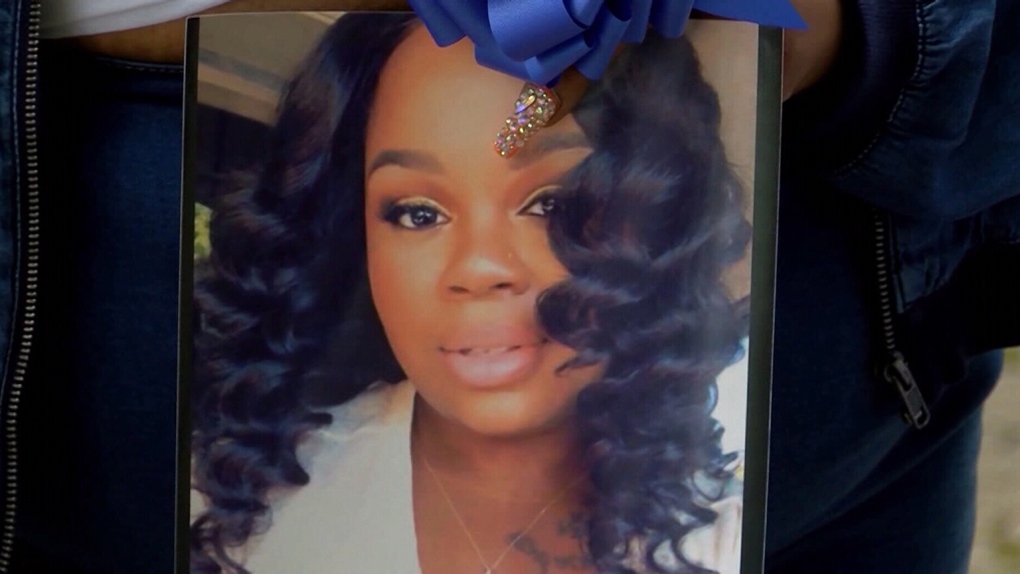 Breonna Taylor is seen in this file image. Taylor, an African-American medical worker in Louisville, Ky., was shot to death by police in her apartment on March, 13, 2020.

Breonna Taylor was briefly alive for "five to six minutes" after being shot, according to a claim made in a lawsuit filed by Taylor's mother against Brett Hankison, Myles Cosgrove and Jonathan Mattingly, the three Louisville Metro Police Department officers identified in connection to her death.

"Breonna, who was unarmed in her hallway, was struck by several rounds of gunfire. She was not killed immediately. Rather, she lived for another five to six minutes before ultimately succumbing to her injuries on the floor of her home," the lawsuit alleges.

Taylor's boyfriend, Kenneth Walker, claimed in an interview with police investigators that Breonna was coughing after being shot, and that police allegedly did not rush in to try to help her after she was shot, according to recordings released by Walker's lawyer.

Walker said that after calling 911, he called Taylor's mother.

"While I was on the phone with her [Taylor's mom], that's when I kind of realized that it was the police, 'cause now they're yelling like 'come out, come out' and I'm on the phone with her. So, while this is, I'm still yelling 'help' 'cause she's [Taylor] over here like coughing and like I'm just freaking out," Walker said.

On a 911 call audio released by one of Walker's attorneys, Walker told the 911 operator that "Somebody kicked in the door and shot my girlfriend," but said that Taylor was unresponsive on the ground.

Taylor, a 26-year-old EMT, was shot multiple times after police broke down the door to her apartment while executing a nighttime, no-knock warrant in a narcotics investigation on March 13.

Walker, in the recording of the police interview, described multiple knocks and both he and Taylor shouting "who is it" to no response. He said as the couple approached the door, it came "off the hinges" and he fired a shot. When a "lot of shots" were fired, the two dropped to the floor, Walker said, and his gun fell.

That shot Walker fired struck officer Mattingly in the leg, puncturing his femoral artery and setting off a wave of return fire, according to police. Police said they identified themselves and didn't knock the door off its hinges.

LMPD Sgt. Lamont Washington told CNN in an email Friday that since Taylor's case is still open and litigation is pending, they are not commenting on the allegations.

The Jefferson County Coroner refuted the allegation that Taylor could have been alive for several minutes after being shot, telling the Louisville Courier-Journal that "Taylor likely died within a minute of being shot and couldn't have been saved."

Coroner Barbara Weakley-Jones also told the Courier-Journal that Taylor would not have survived her injuries even if medical assistance were immediate.

"If she had even been outside of an emergency room department at a hospital, and she got shot and sustained the same injury, they would not have been able to save her," she said. "... So there's no way that even if they (police) ran to her and tried to give her aid, they can't do anything because it's all internal injuries that you can't stop," Weakley-Jones told the newspaper.

The lawsuit filed by Taylor's mother said that "despite Breonna's significant other trying to protect her, Breonna was gunned down by the men breaking into her home...and fought for her life for more than five minutes before finally succumbing to her injuries."

Walker also said during his interview with police that he yelled for help after Breonna was shot and after about five minutes, he called his mother, who told him to call 911. Walker said he did not realize until later that it was actually police who shot her, and that they did not come rushing in.

"I'm yelling, 'Somebody come help her' or whatever and then after it's been like five minutes, like, I called my mom and I told her that somebody just kicked in the door and shot Bre," Walker said. "What really made me not realize it was the police either, 'cause nobody was, like, rushing in after all this happened. They all, like, stayed outside. So I'm like, what the heck was that?" Walker said.

Walker was charged with attempted murder of a police officer and first-degree assault, but Kentucky's Commonwealth's Attorney Tom Wine said his office had filed a motion to dismiss the case against Walker.

CNN affiliate WAVE reported that a judge signed the motion to dismiss charge of the charge.