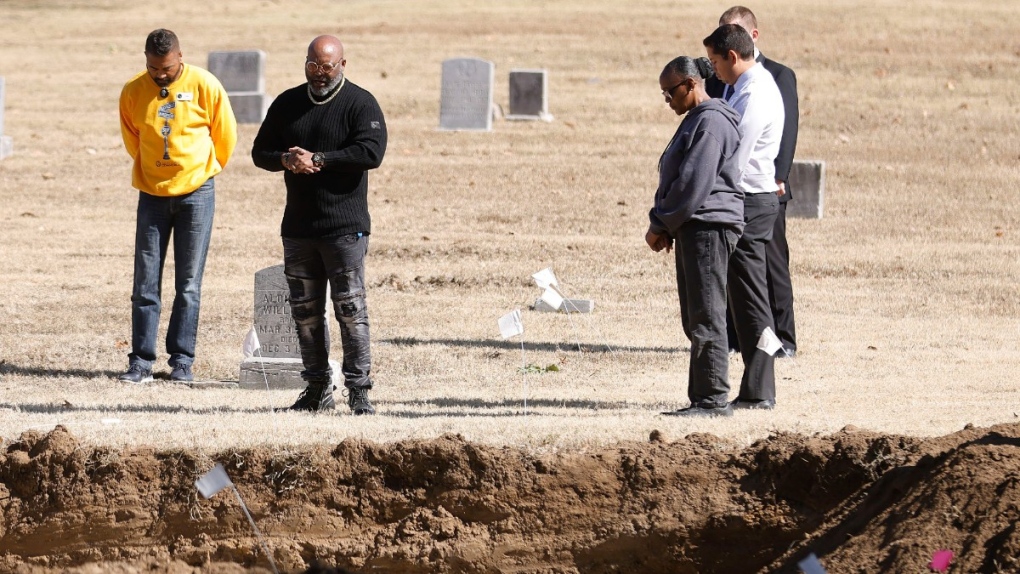 Pastor Rodney Goss with Morning Star Baptist Church leads a prayer during a reburial ceremony at Oaklawn Cemetery during an excavation while searching for bodies from the 1921 Tulsa Race Massacre, Oct. 27, 2022, in Tulsa, Okla. (Mike Simons/Tulsa World via AP)

The latest search for remains of victims of the 1921 Tulsa Race Massacre has ended with 32 additional caskets discovered and eight sets of remains exhumed, according to the city.

The excavation and exhumations at Tulsa's Oaklawn Cemetery that began Oct. 26 ended Friday and the remains were sent to a nearby lab for analysis and DNA collection.

Searchers sought unmarked graves of people who were probably male, in plain caskets with signs of gunshot trauma -- criteria for further investigation that were based on newspaper reports at the time, said forensic anthropologist Phoebe Stubblefield.

Two sets of the 66 remains found in the past two years have been confirmed to have gunshot wounds, according to Stubblefield, though none have been identified or confirmed to be victims of the massacre.

Investigators are looking for a possible mass grave of victims of the 1921 massacre at the hands of a white mob that descended on the Black section of Tulsa -- Greenwood. More than 1,000 homes were burned, hundreds more were looted and destroyed and a thriving business district known as Black Wall Street was destroyed.

Most historians who have studied the event estimate the death toll to be between 75 and 300. Historians say many of the victims were buried in unmarked graves, their locations never recorded and rumours have persisted for decades of mass graves in the area.

Stackelbeck said the remains meeting the criteria for possible massacre victims and exhumed thus far are not in a mass grave, but instead interspersed in the search area.

Tulsa Mayor G.T. Bynum said he considers the entire cemetery to be a mass grave.

"Is there a mass grave where there are people lined up in a row like we thought might be? That is not the case," Bynum said. "Is Oaklawn Cemetery still a mass grave? Yes."

Investigators have recommended additional scanning of a nearby park and adjacent homeless camp, where oral histories have indicated massacre victims were buried.

Bynum said the city will decide the next step after reviewing the next report from researchers that is expected sometime next year.

All the exhumed remains will be reburied, at least temporarily, at Oaklawn, where the previous reburial was closed to the public, drawing protests from about two dozen people who said they are descendants of massacre victims and should have been allowed to attend.

The massacre wiped out generational wealth, and victims were never compensated, but a pending lawsuit seeks reparations for the three remaining known survivors. They are each now more than 100 years old.