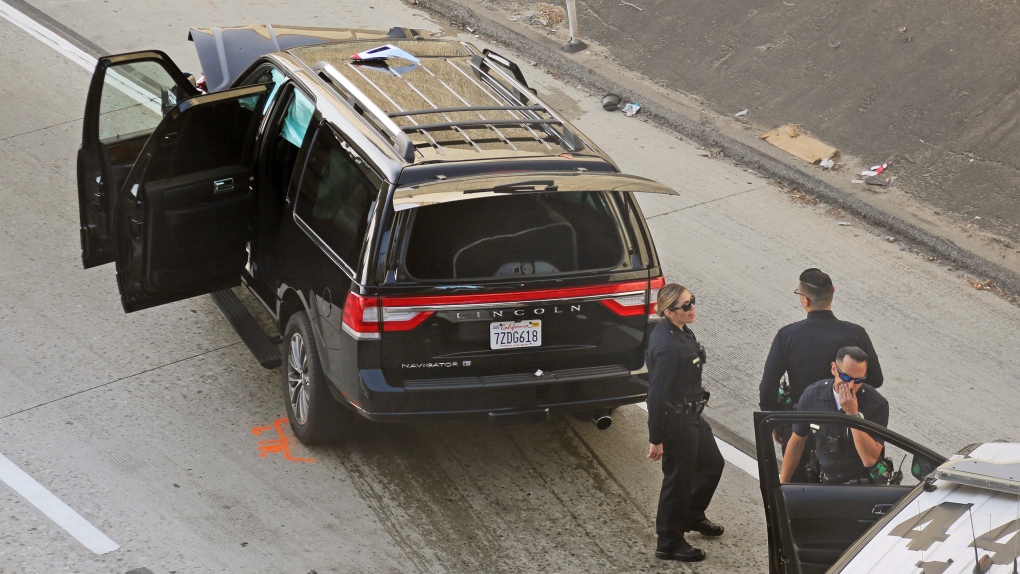 Los Angeles police officers stand after a pursuit of a stolen hearse with with a casket and body inside on Interstate 110 in South Los Angeles Thursday, Feb. 27, 2020. (AP Photo/Reed Saxon)

LOS ANGELES -- Prosecutors on Monday charged a man suspected of stealing a hearse with a body inside and leading police on a wild chase that ended with a crash on a busy Los Angeles freeway.

James Juarez, 25, faces felony charges including fleeing a peace officer while driving recklessly and taking a vehicle without consent, the Los Angeles County District Attorney's Office said in a statement.

It wasn't immediately known if Juarez, described by prosecutors as a transient, has a lawyer who could comment on his behalf.

Juarez was arrested Feb. 27 after the crash, which closed the 110 Freeway during the morning commute. Authorities found the body undisturbed inside a casket in the back of the black Lincoln Navigator.

Police said the hearse was stolen the night before from outside St. Anthony Greek Orthodox Church in East Pasadena. Local media reported the SUV was taken while a mortuary attendant brought a different body into the church.

The Los Angeles County Sheriff's Department did not identify the mortuary.

If convicted as charged, Juarez faces a possible maximum sentence of more than three years in state prison, prosecutors said.