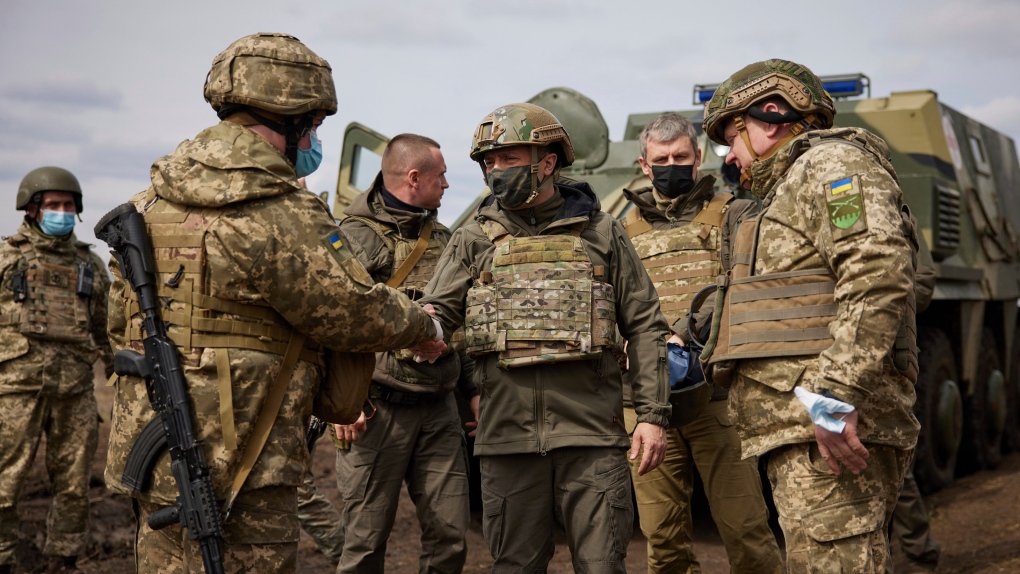 MOSCOW -- The Kremlin said Friday it fears the resumption of full-scale fighting in eastern Ukraine and could take steps to protect civilians there, a stark warning that comes amid a Russian troop buildup along the border.

The statement by Russian President Vladimir Putin's spokesman, Dmitry Peskov, reflected the Kremlin's determination to prevent Ukraine from using force to try to retake control over separatist-controlled territory in the country's east.

Ukraine's military chief dismissed the Russian claims that the country's armed forces are preparing for an attack on the rebel east.

Ukrainian forces and Russia-backed separatists have been fighting in eastern Ukraine since shortly after Moscow's 2014 annexation of Ukraine's Crimea Peninsula. More than 14,000 people have died in the conflict, and efforts to negotiate a political settlement have stalled.

Ukraine and the West have accused Russia of sending in troops and weapons to help separatists, accusations that Moscow has denied.

Ukrainian President Volodymyr Zelenskiy said Friday after visiting troops in the east that 26 Ukrainian soldiers have been killed so far this year. Increasingly frequent breaches of a July truce agreement mean that "we again face the need to establish a cease-fire," Zelenskiy said.

The separatist authorities in Donetsk said 20 troops and 2 civilians have been killed since the beginning of 2021.

Western and Ukrainian officials have raised concerns in recent weeks about increasingly frequent cease-fire violations in the country's industrial heartland, known as Donbas. They also expressed worries about the Russian troop buildup along the border with Ukraine.

During a call with Putin on Thursday, German Chancellor Angela Merkel "called for the removal of these troop reinforcements in order to achieve a de-escalation of the situation."

White House press secretary Jen Psaki said Thursday the U.S. is also increasingly worried about the Russian troop buildup, noting that Russia now has more troops on the border with Ukraine than at any time since 2014.

In response, Peskov said Russia is free to deploy its troops wherever it wants on its territory. He accused the Ukrainian military of an "escalation of provocative actions" along the line of control in the east that threatens Russia's security.

"The Kremlin has fears that a civil war could resume in Ukraine. And if a civil war, a full-scale military action, resumes near our borders that would threaten the Russian Federation's security," Peskov said. "The ongoing escalation of tensions is quite unprecedented."

In Kyiv, Col.-Gen. Ruslan Khomchak, the commander-in-chief of Ukraine's armed forces, rejected Moscow's claims of the alleged Ukrainian preparations for an offensive in the east as part of a "disinformation campaign" and a "hybrid war."

The Russian military said its scout units have trained for missions behind enemy lines during the latest drills in the Belgorod region that borders Ukraine. And in the Black Sea, the Russian navy's missile boats practiced striking enemy ships.

Dmitry Kozak, a Putin aide who serves as Russia's top negotiator with Kyiv, warned Ukraine on Thursday against using force to retake control of the east, where many residents have Russian citizenship. Such a move would mark "the beginning of an end for Ukraine," he said, adding that Russia would likely act to protect its citizens.

Asked about Kozak's comment, Peskov alleged that virulent nationalist rhetoric in Ukraine was inflaming hatred against the mostly Russian-speaking population of the east. He claimed that if civilians in eastern Ukraine faced the threat of a massacre, "all countries, including Russia, will take steps to prevent such tragedies."

A Turkish Foreign Ministry official said Friday that the United States has notified Turkey that two U.S. warships will sail to the Black Sea on April 14 and April 15 and stay there until May 4 and May 5. The official, speaking on condition of anonymity in line with government rules. said the U.S. notified Turkey 15 days prior to the ships' passage in line with a convention regulating shipping through the Turkish straits.

Such visits by the U.S. and other NATO ships have vexed Moscow, which long has bristled at Ukraine's efforts to build up defence ties with the West and its aspirations to eventually join NATO.

Russian Foreign Ministry spokeswoman Maria Zakharova warned Friday that Ukraine's NATO bid "wouldn't only lead to a massive escalation of the situation in the southeast but could also entail irreversible consequences for the Ukrainian statehood."

Suzan Fraser in Ankara, Turkey contributed to this report