Kremlin: Putin to seek guarantees over Ukraine from Biden 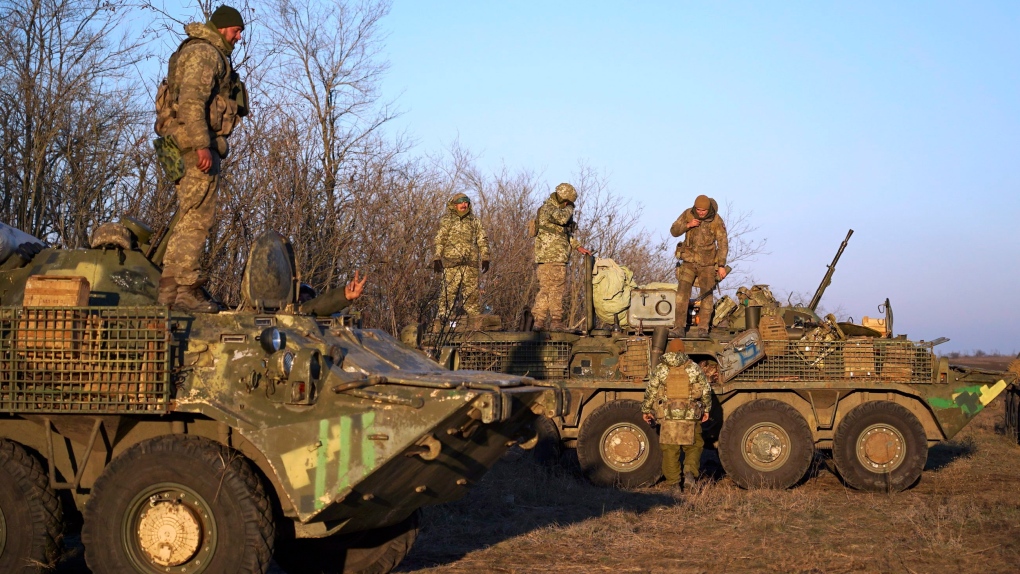 MOSCOW -- The Kremlin said Friday that President Vladimir Putin will seek binding guarantees precluding NATO's expansion to Ukraine during a planned call with U.S. President Joe Biden, while a U.S. intelligence report and the Ukrainian defence minister warned of a possible Russian invasion of Ukraine as soon as next month.

With tensions between Russia and the West escalating, Biden said his administration was "putting together what I believe to be the most comprehensive and meaningful set of initiatives to make it very, very difficult for Mr. Putin to go ahead and do what people are worried he may do" in positioning troops near Ukraine.

The NATO chief and numerous former U.S. diplomats and security officials say Russia's demand that Biden rule out NATO membership for Ukraine, a former Soviet republic eager to ally with the West, is a nonstarter.

"There's absolutely no way in the world that that Russian position will make any progress," John Herbst, a former U.S. ambassador to Ukraine, said Friday. "It's basically a rhetorical point for Moscow." More likely, he said, were U.S. assurances that Western military assistance to Ukraine be for defensive purposes only.

Ukraine, the U.S. and other Western allies are increasingly concerned that a Russian troop buildup near the Ukrainian border could signal Moscow's intention to invade. Officials say it remains unclear if Putin intends to go through with an invasion or appears to be threatening one in hopes of forcing concessions from Ukraine and its Western allies. The U.S. has threatened the Kremlin with the toughest sanctions yet if it launches an attack, while Russia has warned that any presence of NATO troops and weapons on Ukrainian soil would cross a "red line."

Ukrainian Defence Minister Oleksii Reznikov told lawmakers Friday that the number of Russian troops near Ukraine and in Russian-annexed Crimea is estimated at 94,300, warning that a "large-scale escalation" is possible in January.

An unclassified U.S. intelligence report made public later Friday cited recent artillery, troop and materiel movements near Ukraine's border in saying Russia was planning for the possibility of a military offensive with 175,000 troops early next year.

"The plans involve extensive movement of 100 battalion tactical groups ... along with armor, artillery, and equipment," according to the U.S. report, which said about half of those units were already near Ukraine's border. The intelligence finding was first reported by The Washington Post. A Biden administration official, speaking on condition of anonymity to discuss the finding, confirmed it to The Associated Press.

Amid the mounting tensions, Putin's foreign affairs adviser Yuri Ushakov told reporters Friday that arrangements have been made for a Putin-Biden call in the coming days, adding that the date will be announced after Moscow and Washington finalize details.

White House press secretary Jen Psaki said later that administration officials have "engaged in the possibility" of a Biden-Putin call.

"It certainly would be an opportunity to discuss our serious concerns about the bellicose rhetoric, about the military buildup that we're seeing on the border of Ukraine," Psaki said.

On Thursday, U.S. Secretary of State Antony Blinken met face-to-face with his Russian counterpart, Sergey Lavrov, in Stockholm to demand that Russia pull back troops from the border with Ukraine. Lavrov retorted that the West was "playing with fire" by denying Russia a say in any further NATO expansion into countries of the former Soviet Union.

Ukraine has pushed to join the alliance, which has held out the promise of membership but hasn't set a timeline.

Ushakov noted that during the call with Biden, Putin will raise his demand for a legally binding agreement that would "exclude any further NATO expansion eastward and the deployment of weapons systems that would threaten us on the territories of neighbouring countries, including Ukraine."

Russia long has pushed for such arrangements, Ushakov said, emphasizing that it has become particularly acute because of the latest buildup of tension. "It simply can't continue like that," he said.

NATO Secretary General Jens Stoltenberg said this week that Russia had no say in whether Ukraine joined the Western security alliance.

"It is up to Ukraine and 30 allies to decide when Ukraine is ready to join the alliance," he said. Russia "has no veto, no right to interfere in that process."

Russia and Ukraine have remained locked in a tense tug-of-war after Russia annexed Ukraine's Crimean Peninsula in 2014 and threw its weight behind a separatist insurgency in Ukraine's eastern industrial heartland, known as the Donbas. More than 14,000 people have died in the fighting.

Ukraine's defence minister warned Friday that an escalation "is a probable scenario, but not certain, and our task is to avert it."

"Our intelligence service analyzes all scenarios, including the worst ones," Reznikov said. "The most probable time when (Russia) will be ready for the escalation is end of January."

Konstantin Kosachev, a deputy speaker of the upper house of parliament, reaffirmed Moscow's denial that it was pondering an attack.

"We don't have any plans to attack Ukraine. We don't have any heightened military activity near Ukraine's borders. There is no preparation underway for an offensive," Kosachev told Russia's state TV channel Russia-24.

The Kremlin has voiced concern that Ukraine may use force to reclaim control of the rebel east. And adding to the tensions, the head of a Russian-backed, self-proclaimed separatist republic in eastern Ukraine said Thursday that he could turn to Moscow for military assistance if the region faced a Ukrainian attack.

Reznikov said Ukraine wouldn't do anything to provoke Russia but is prepared to respond in case of an attack. "Ukraine is most interested in political and diplomatic resolution," the defence minister said.

He said that Ukraine will launch construction this month of two naval bases with British assistance -- one in Ochakiv on the Black Sea and another one in Berdyansk on the Sea of Azov.

"The development of the navy and the missile program are among our priorities," he said.

Karmanau reported from Kyiv, Ukraine. Ellen Knickmeyer and Aamer Madhani in Washington and Dasha Litvinova in Moscow contributed to this report.