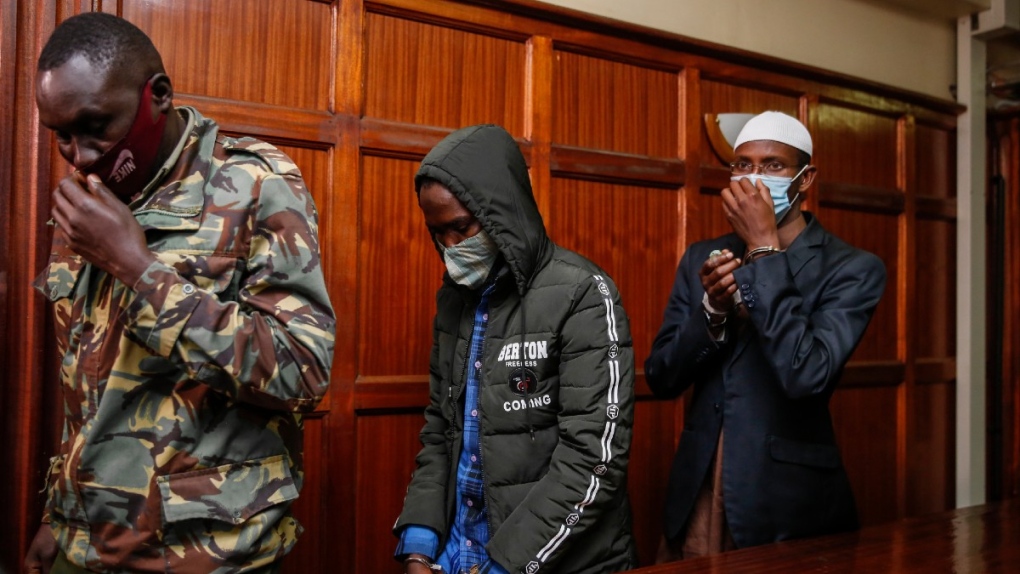 Hussein Hassan Mustafah, centre, and Mohamed Ahmed Abdi, right, who were both found guilty of supporting the gunmen involved in the Westgate Mall attack in Sept. 2013, leave after the verdict is delivered in their trial at Milimani court in the capital Nairobi, Kenya, on Oct. 7, 2020. (Brian Inganga / AP)

NAIROBI, KENYA -- A Kenyan court on Friday sentenced two men to 26 and 11 years in prison for supporting the days-long 2013 attack on Nairobi's upscale Westgate Mall that left 67 people dead.

Mohamed Ahmed Abdi and Hussein Hassan Mustafah were found guilty earlier this month of charges including conspiracy to commit terrorism by assisting the al Qaeda-linked al-Shabab extremist group based in neighbouring Somalia.

Chief Magistrate Francis Andayi acquitted a third suspect, Liban Omar, who authorities say is a brother to one of the attackers. But his lawyer said Omar was abducted by men believed to be security agents five minutes after his release.

During the sentencing, Andayi said Abdi and Mustafah's participation may be considered subtle "but the end result is devastating." He said he took into account that they had already spent seven years in custody.

Defence lawyer Mbugua Mureithi pleaded for leniency for his client, saying Abdi has accepted the court's findings and was remorseful, though he maintains his innocence.

Mureithi urged a custodial sentence for Abdi, allowing him to report to a police station from time to time, because he was a first offender.

"His responsibility is peripheral other than the communication interlinks between him and the actual men who killed our people," Mureithi said. "There is no evidence that he provided them with the logistics or finances or any other form of tangible support to execute our people."

Abdi asked the court to consider his family situation as well: "My father is suffering from cancer and I'm the oldest," he said.

Mustafah also asked for leniency, saying he needed to look after his elderly parents.

The nearly four-day 2013 attack by four gunmen with al-Shabab was the first large-scale assault in Kenya's capital. Al-Shabab has vowed retribution on Kenya for sending troops to fight the group in Somalia since 2011.

Kenya's police and army were widely criticized for their response to the attack. Lack of co-ordination led to friendly fire in which one police officer was killed.