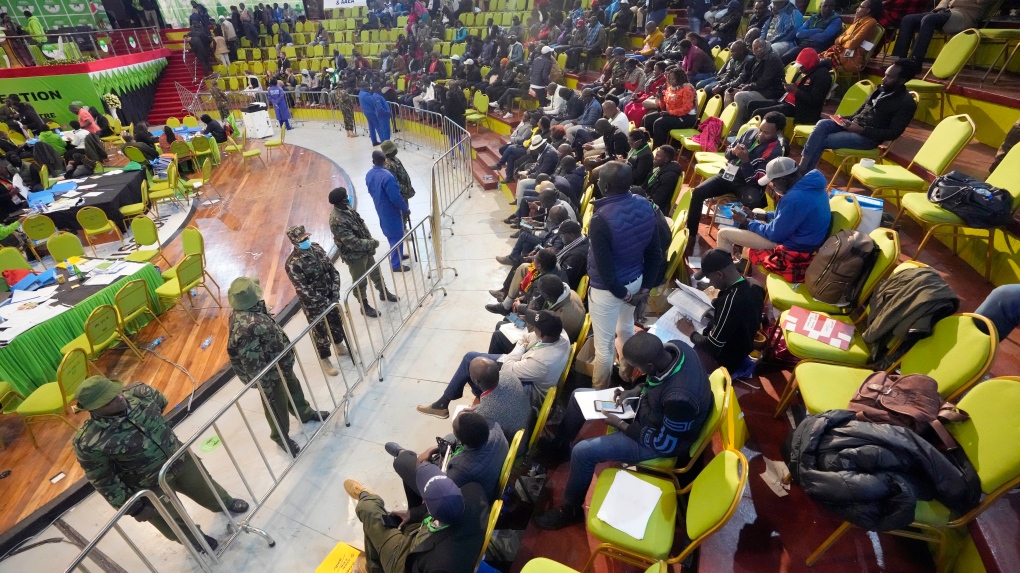 Opposition figure Raila Odinga said Tuesday that he would challenge the results of Kenya's close presidential election with "all constitutional and legal options" after Deputy President William Ruto was declared the winner, bringing new uncertainty to East Africa's most stable democracy.

Now the country faces weeks of disputes and the possibility that the Supreme Court will order another election. Religious and other leaders have pleaded for calm to continue in a nation with a history of deadly post-election violence.

"Let no one take the law into their own hands," Odinga said to his often-passionate supporters. In Kisumu, a city in his western Kenya stronghold, some residents said they were tired of going into the street and being tear-gassed.

It was Odinga's first appearance since Kenya's electoral commission chairman declared Ruto the winner Monday with almost 50.5% of the votes. Four of the seven commissioners abruptly announced that they couldn't support the results, and Odinga supporters scuffled with the remaining commissioners at the venue where the announcement was made.

Shortly before Odinga spoke, the four commissioners asserted to journalists that the chairman's final math added up to 100.01% and that the excess votes would have made a "significant difference." They also said he didn't give them a chance to discuss the results before making his declaration.

"What we saw yesterday was a travesty and blatant disregard of the constitution," Odinga said, calling the election results "null and void."

The president-elect has called the commissioners' allegations a "sideshow" and said they had no effect on the declaration's legality. A U.S. Embassy statement on Monday called the declaration "an important milestone in the electoral process."

The 77-year-old Odinga has pursued the presidency for a quarter-century. His campaign has seven days after Monday's declaration to file a petition with the Supreme Court, which would then have 14 days to make a ruling.

Odinga is renowned as a fighter and was detained for years in the 1980s over his push for multiparty democracy. He was also a supporter of Kenya's groundbreaking 2010 constitution.

His claim that the deeply troubled 2007 election was stolen from him led to violence that left more than 1,000 dead. Though he boycotted the 2017 vote, his court challenge led to election reforms.

The electoral commission was widely seen as improving its transparency in this election, practically inviting Kenyans to do the tallying themselves by posting online the more than 46,000 results forms from around the country.

On Tuesday, the local Elections Observation Group announced that its highly regarded parallel voting tally corroborated the official results in an important check on the process.

But Odinga asserted that the chairman improperly withheld the election results from the rest of the commission until he declared the winner. "The law does not vest in the chairperson the powers of a dictator," he said, and insisted that the commission's decisions must be made by consensus.

There was no immediate statement from the electoral commission or its chairman. A screen at its tallying center that had been showing cumulative presidential election results stopped being updated Saturday and was later turned off. The official form showing final results could not be accessed on the commission's website Tuesday.

Odinga's campaign had expected victory after outgoing President Uhuru Kenyatta, in a political twist, backed his former rival Odinga instead of his own deputy president, with whom he fell out years ago. Some Kenyans have noted that Kenyatta appointed the four dissenting commissioners last year.

The 55-year-old president-elect, Ruto, appealed to Kenyans by making the election about economic differences and not the ethnic ones that have long marked the country's politics with sometimes deadly results. He portrayed himself as an outsider from humble beginnings defying the political dynasties of Kenyatta and Odinga, whose fathers were Kenya's first president and vice president.

Still, the turnout in last Tuesday's vote dipped to 65% as Kenyans across the country of 56 million expressed frustration and lack of confidence that the candidates would address the problems of rising prices, high unemployment and widespread corruption. The now-wealthy Ruto himself has denied multiple allegations of land grabs and other graft.

Ruto's past also includes an indictment by the International Criminal Court for crimes against humanity over his role in the 2007 election violence, though the case was dropped amid allegations of witness intimidation.

Canada will be imposing new sanctions on Iran as a result of a continuing violent crackdown on protesters, Prime Minister Justin Trudeau said Monday.

Prime Minister Justin Trudeau says he will be visiting the regions in Atlantic Canada impacted by Fiona 'as soon as possible this week.' And, as MPs head back into the House of Commons for the first time after this weekend's storm, the NDP are requesting an emergency debate to discuss 'the urgent and escalating situation in Atlantic Canada.'