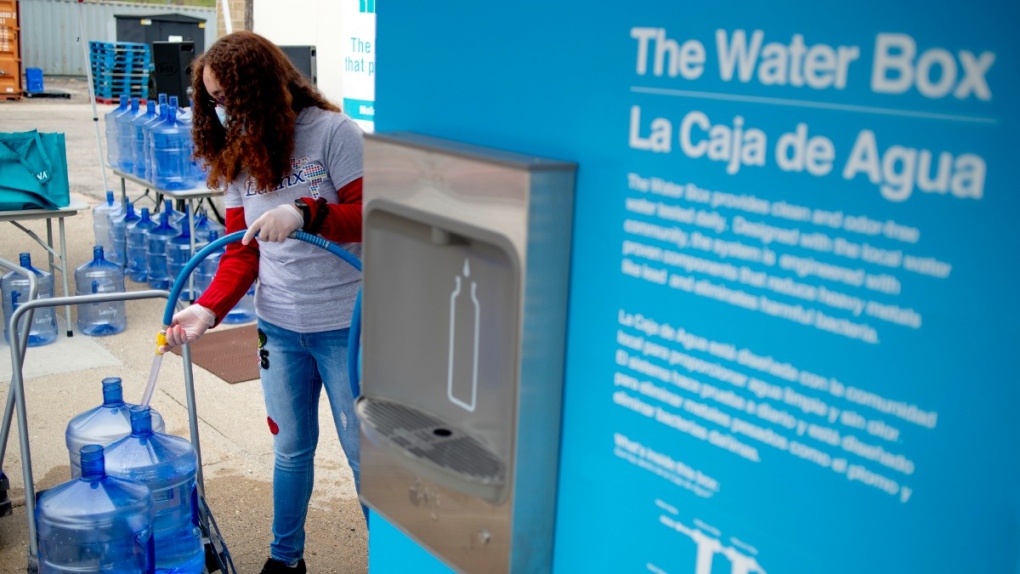 Volunteer Evelyn Cano, of Flint, helps fill five-gallon jugs for Flint residents using The Water Box on the eve of the seventh anniversary of the Flint water crisis during a water distribution, April 24, 2021, at the Latinx Technology & Community Center in Flint, Mich. (Jake May/The Flint Journal via AP)
DETROIT -

A judge declared a mistrial Thursday after jurors said they couldn't reach a verdict in a dispute over whether two engineering firms should bear some responsibility for Flint's lead-contaminated water.

Veolia North America and Lockwood, Andrews & Newman, known as LAN, were accused of not doing enough to get Flint to treat the highly corrosive water or to urge a return to a regional water supplier.

A mistrial was declared in federal court in Ann Arbor, Mich., said Tarrah Cooper Wright, a spokeswoman for Veolia.

After hearing months of evidence, the jury began deliberations on July 25 but also took a planned 11-day break before returning Tuesday.

Flint's water became contaminated in 2014-15 because water pulled from the Flint River wasn't treated to reduce the corrosive effect on lead pipes.

But Veolia's lawyers noted the firm was briefly hired in the middle of the crisis, not before the spigot was turned on. LAN said an engineer repeatedly recommended that Flint test the river water for weeks to determine what treatments would be necessary.

LAN attorney Wayne Mason said outside engineers were getting lumped in with a "platoon of bad actors," namely state and local officials who controlled all major decisions and seemed more concerned about the cost of water than its quality.

Veolia and LAN were not part of a landmark US$626 million settlement involving Flint residents, the state of Michigan and other parties.