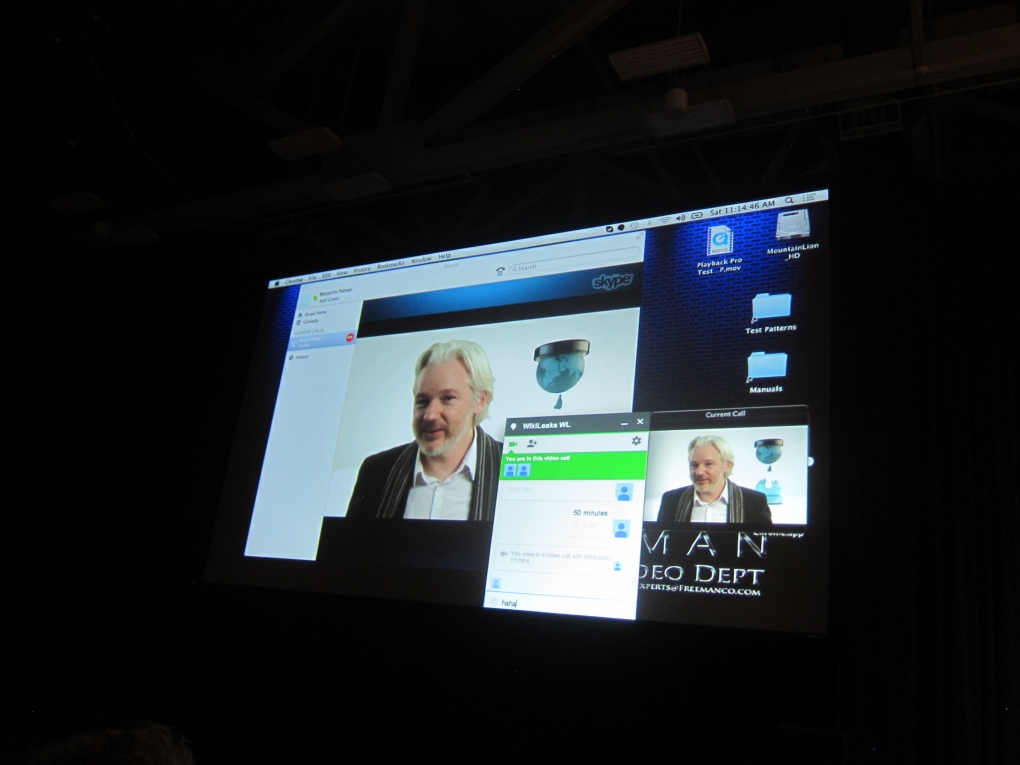 AUSTIN, Texas -- Speaking over Skype from the Ecuadorian embassy in London, fugitive WikiLeaks founder Julian Assange said his living situation is a bit like prison -- with a more lenient visitor policy.

He also hinted that new leaks are coming from WikiLeaks, though he gave no specifics on what these might be.

Assange, who has been confined to the embassy since June 2012, discussed government surveillance, journalism and the situation in Ukraine on Saturday in a streaming-video interview beamed to an audience of 3,500 attendees of the South By Southwest Interactive festival in Austin, Texas.

Assange's hourlong remote appearance was spiked with technical glitches. As the audio cut out, he sometimes asked audience members to raise their hands if they could hear him. Benjamin Palmer, the co-founder of marketing firm The Barbarian Group who interviewed Assange, at one point resorted to texting his questions.

"We know what happens when the government is serious," he said. "Someone is fired, someone is forced to resign, someone is prosecuted, an investigation (is launched), a budget is cut. None of that has happened in the last eight months since the Edward Snowden revelations."

Assange's appearance at this five-day conference -- which will host Snowden in a similar remote interview Monday -- signal the growing concern in the tech community around issues of online privacy, surveillance and security, even as Internet giants like Google and Facebook reap billions in advertising revenue from collecting information about their users.

Assange has taken asylum at the Ecuadorian embassy in London to avoid extradition to Sweden over a sexual assault charge, which he has said would be merely a first step in efforts to move him to the U.S. to face charges over publishing hundreds of thousands of secret documents.

Asked if he was afraid, Assange said he is, like any normal person.

"Only a fool has no fear. Courage is seeing fear," he said, and proceeding anyway.

Journalist Glenn Greenwald, who has reported extensively about Snowden and the NSA's surveillance efforts, also will appear at the festival Monday. Unlike Assange and Snowden, though, he'll be there in person.