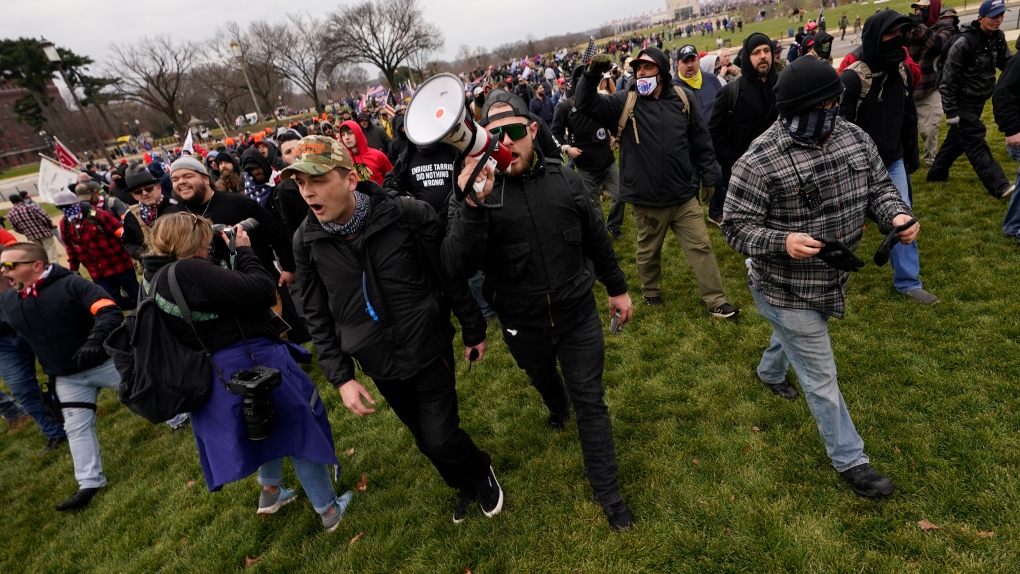 FILE - In this Wednesday, Jan. 6, 2021 file photo Ethan Nordean, with backward baseball hat and bullhorn, leads members of the far-right group Proud Boys in marching before the riot at the U.S. Capitol. Nordean, 30, of Auburn, Washington, has described himself as the sergeant-at-arms of the Seattle chapter of the Proud Boys. The Justice Department has charged him in U.S. District Court in Washington, D.C., with obstructing an official proceeding, aiding and abetting others who damaged federal property, and knowingly entering or remaining in a restricted building. (AP Photo/Carolyn Kaster,File)

SEATTLE -- A federal judge on Wednesday ordered the release of suburban Seattle man and prominent member of the Proud Boys far-right group, pending trial on charges filed in connection with the January insurrection at the U.S. Capitol.

U.S. District Judge Beryl Howell in Washington, D.C., granted Ethan Nordean's request for release despite prosecutors' new allegations about the key role he played as the Proud Boys' de facto leader and an organizer of the Capitol riot, The Seattle Times reported.

Though she called evidence of Nordean's alleged role troubling, Howell ruled the government had "not met its burden by clear and convincing evidence that the defendant poses a danger to the community, or by a preponderance that he will flee" before trial.

Under the ruling, Nordean, 30, who is known in far-right circles by his alias, "Rufio Panman," will be restricted to home detention and must remove all firearms in his home, among other conditions.

It was Nordean's second attempt to win release pending trial on criminal charges related to the riot. U.S. Magistrate Judge Brian Tsuchida last month ordered Nordean to be released during a detention hearing in Seattle. But prosecutors appealed to the D.C. federal court, and Howell blocked the release, instead ordering Nordean to be transported to the nation's capital to face further proceedings.

Because of delays caused by winter storms, a transport backlog and other complications, Howell said Nordean has remained held at the Federal Detention Center in SeaTac, Washington.

Earlier Wednesday, a federal grand jury indicted Nordean, charging him with essentially the same criminal counts that prosecutors had charged him with last month.

Nordean is charged with aiding and abetting an injury or depredation against government property, obstructing or impeding an official proceeding, knowingly entering or remaining in any restricted building or grounds without lawful authority, and violent entry and disorderly conduct on Capitol grounds.

If convicted of all charges, Nordean faces more than 30 years in prison. He has not entered pleas to any of the charges.

Nordean, of Auburn, Washington, has described himself as the sergeant-at-arms and as the president of the Proud Boys' Seattle chapter. He has been detained since federal agents arrested him at his home on Feb. 3.

The Proud Boys are an extremist and male-chauvinist organization. At least eight people linked to the group have been charged in the Capitol riot.

Howell's order releasing Nordean came after a lengthy hearing held by video- and tele-conference that started with an announcement that an unspecified emergency at the SeaTac facility prevented Nordean's attendance. His defence attorneys requested the hearing take place in his absence.

Federal prosecutors laid out new details this week in a 24-page brief arguing Nordean should remain in custody, contending the "weight of the evidence against (Nordean) is overwhelming" in video footage, and that photos of Nordean and his own social media posts show he led and ordered a group of Proud Boys to breach the Capitol.

Nicholas Smith, one of Nordean's attorneys, countered Wednesday that the government hadn't shown any evidence that Nordean gave specific orders to others and said he wasn't responsible for any crimes they committed.

"The government said today that because he was marching with a group of people toward the Capitol, he aided and abetted all the criminal engagement by this group," Smith said. "That's frivolous."

Assistant U.S. Attorney Jason McCullough countered: "There was a plan to disrupt the Electoral College vote corruptly; this was not simply a march."

Before ruling, Howell noted that the evidence clearly shows Nordean was heavily involved in organizing the Proud Boys on Jan. 6.

But, "there's no allegation that the defendant caused injury to any person or that he personally caused damage to any property," the judge said. "This is unlike other cases I've seen where people have actually done damage inside the Capitol, and the government has not sought pre-trial detention."