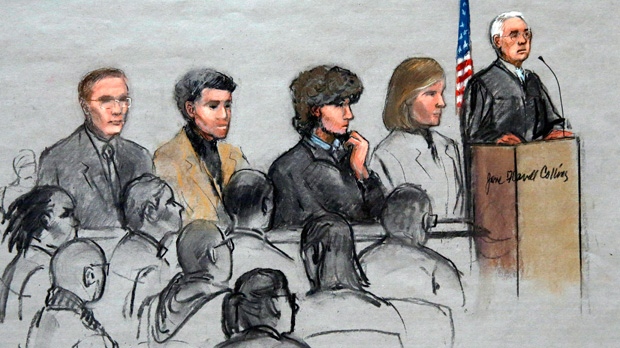 In this courtroom sketch, Boston Marathon bombing suspect Dzhokhar Tsarnaev, third from right, is depicted with his lawyers and U.S. District Judge George O'Toole Jr., right, as O'Toole addresses a pool of potential jurors in a jury assembly room at the federal courthouse, Tuesday, Jan. 6, 2015, in Boston. Tsarnaev is charged with the April 2013 attack that killed three people and injured more than 260. His trial is scheduled to begin on Jan. 26. He could face the death penalty if convicted. (AP Photo/Jane Flavell Collins)

BOSTON -- As the second phase of jury selection began in the federal death penalty trial of Boston Marathon bombing suspect Dzhokhar Tsarnaev, it immediately became clear that seating a jury in the high-profile case won't be easy.

The judge and attorneys heard from at least a half dozen people who said they already believe Tsarnaev is guilty, several who said they could never impose the death penalty and others who said sitting on a lengthy trial would be a serious financial hardship. The trial is expected to last three to four months.

They also heard from a man whose wife treated injured bombing victims.

Tsarnaev, 21, is accused in the deadly 2013 marathon bombing, which killed three people and injured more than 260. He also is accused of killing an MIT police officer days after the bombing.

The first juror questioned said he believes Tsarnaev is guilty and he would sentence him to death. When pressed by Judge George O'Toole Jr. on whether he would be able to change his opinion after listening to evidence at the trial, the advertising account manager said, "I can't imagine any evidence that would change how I feel about what happened."

"There's no way in modern America today ... that I am going to vote for the death penalty. I will not," he said.

In order to be chosen in a death penalty case, prospective jurors have to show a willingness to consider both the death penalty and alternative punishments. In the bombing case, they must choose between execution or life in prison without the possibility of release.

Some people told the judge that despite intense media coverage of the bombings, they had not formed an opinion on Tsarnaev's guilt or innocence.

"I don't know this guy over here from Adam," said one man, a software programmer.

A panel of 12 jurors and six alternates will be chosen. The judge has said he expects testimony in the trial to begin Jan. 26