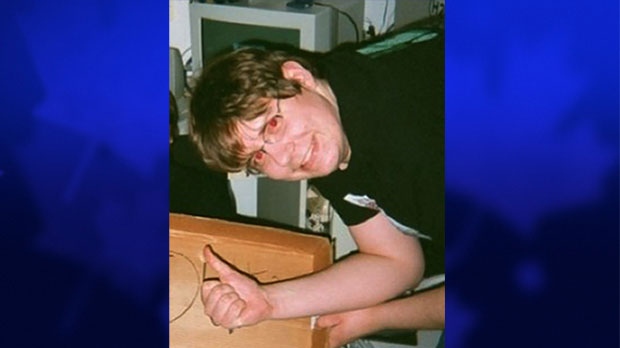 This image provided by by Mike Cochran shows Neil E. Prescott in an undated photo. Cochran, a friend of Prescott, says the Maryland man accused of threatening to shoot up his workplace is a "gentle giant" who collected weapons and had expressed concerns about break-ins near his apartment complex. (AP / Mike Cochran)

PALMER PARK, Md. -- A week after the Colorado movie theater massacre, a Maryland man was taken into custody when police said he made a "joker" reference and threatened to shoot up a business he was being fired from.

Neil E. Prescott, 28, had an arsenal of guns, though it wasn't clear how serious he was about threats he made to his boss over the telephone, authorities said. When police questioned Prescott at his apartment, authorities said he was wearing a T-shirt that said "Guns don't kill people. I do."

Prescott told a supervisor at software and mailroom supplier Pitney Bowes that he wanted to see his boss' "brain splatter all over the sidewalk," according to police and an application for a search warrant.

"I'm a joker and I'm gonna load my guns and blow everybody up," Prescott said, according to the document.

The threats were made in two separate phone calls this week, and investigators who searched Prescott's apartment Friday morning found several thousand rounds of ammunition and about two dozen semi-automatic rifles and pistols. The weapons so far appear to have been acquired legally but are still being examined, said Mike Campbell, a spokesman for the Bureau of Alcohol, Tobacco, Firearms and Explosives.

Prescott was taken into custody at his apartment Friday and was receiving a psychiatric evaluation at a hospital. He has not yet been charged.

"We can't measure what was prevented here, but what was going on over the last 36 hours was a significant incident in the county. And we think a violent episode was avoided," said county police Chief Mark Magaw.

The workplace Prescott is accused of threatening to shoot up is located just outside Washington.

It wasn't immediately clear when the threat was to be carried out, but last week's mass shooting during the latest Batman movie -- coupled with the "Joker" reference -- put police on edge and gave the comments extra urgency.

Though there's no other indication of a link to the Colorado shooting, police believe the joker comments were a "clear reference" to the killings, the warrant said. The man accused in those shootings, James Holmes, had his hair dyed reddish-orange, and called himself the Joker, New York Police Commissioner Ray Kelly has said.

It was not immediately clear if Prescott had a lawyer. He did not appear to have a criminal record in Maryland.

A search for Neil Prescott on a website that tracks users' online activities led to a profile that appears to be him on mdshooters.com, a website for gun enthusiasts. On it, Prescott, who used an online tag of slog403 and identified himself as from Crofton, traded advice with other users about obtaining firearms.

During a conversation last week about acquiring a 30-round magazine, he indicated he would "never violate MD laws as I respect this site and state." But in a July 18 post, he also said he wished to "unleash 30 rounds of hell" and added a smiley face emoticon. It wasn't clear what he was referring to.

Police on Thursday made an initial visit to Prescott's home, where he appeared groggy and was wearing the T-shirt with the reference to guns.

"The multiple threats and the nature of the threats and that action, together, led us to a place where we could get an emergency petition" for a psychiatric evaluation, said Deputy Police Chief Henry Stawinski.

According to the search warrant application, Prescott made the threat during a phone call on Monday morning when a supervisor contacted him on a work-related matter, then made similar statements in a separate conversation about 15 minutes later. During the call, Prescott acknowledged it was "kind of foolish of me" to say this over the phone, the supervisor told authorities.

The supervisor was aware of Prescott's arsenal and the comments "made him feel fear for his life," police said in the warrant application. The document said Prescott had been fired after working at Pitney Bowes for at least three years, but police said Friday he was in the process of being terminated.

Pitney Bowes spokeswoman Carol Wallace said in a statement that Prescott was an employee of a subcontractor to the company and had not been on any Pitney Bowes property in at least four months.