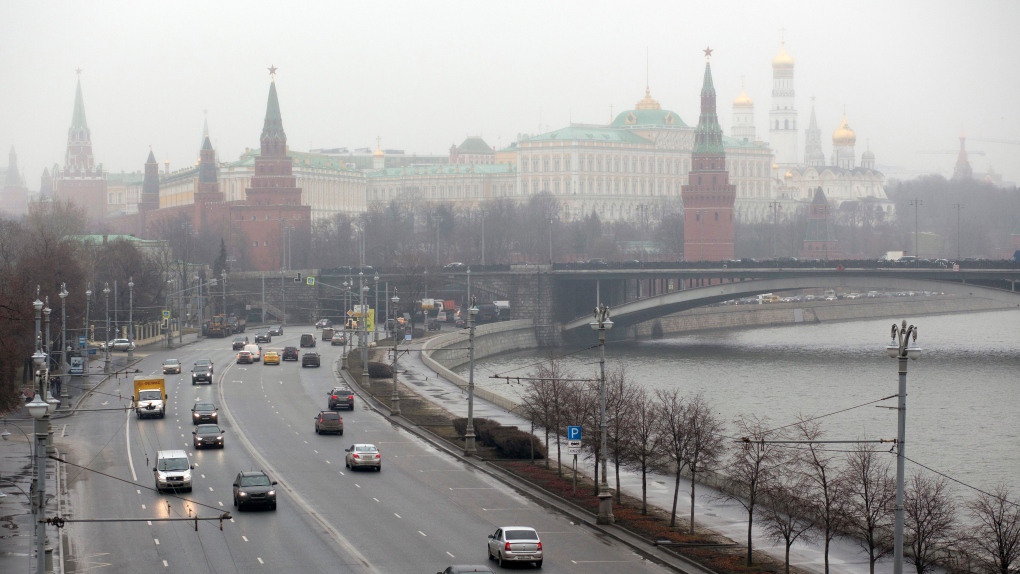 The Kremlin is seen through a fog in Moscow, Russia, Monday, March 6, 2017. (Alexander Zemlianichenko/AP)

MOSCOW -- Two Jehovah's Witnesses have been convicted of extremism in Russia and four more arrested, one of whom reported being tortured in custody, the religious group said Friday.

A court in Kamchatka on Friday sentenced Mikhail Popov and his wife Yelena to fines of 350,000 and 300,000 rubles (US$5,500 and US$4,700) for engaging in extremist activities related to their membership in the Jehovah's Witnesses.

Earlier this week the police raided some 40 homes of Jehovah's Witnesses in Chita, a city in southern Siberia, and arrested four members of the group. One of them, Vadim Kutsenko, was beaten and tasered by men who identified themselves as officers of Russia's National Guard, his lawyer Artur Ganin told The Associated Press.

"They handcuffed him, put a hat on his head and over his eyes and drove him away in an unknown direction," Ganin said in a phone interview Friday. He said officers brought Kutsenko to a forest, where they choked, beat and tasered him, trying to extract a confession.

"He is currently in custody -- in pain and worried about his family, because he was threatened that something could happen to his wife," Ganin said.

The National Guard did not respond to a request for comment.

Russia officially banned Jehovah's Witnesses in 2017 and declared the group an extremist organization. The Kremlin has actively used vaguely worded extremism laws to crack down on opposition activists and religious minorities.

Since then, hundreds of members have been subjected to raids, arrests and prosecution. Twenty-eight members of the organization have been convicted, nine of whom have been sentenced to prison, and more than 300 people are currently under criminal investigation.

The crackdown on members of the group continues despite a promise by Russian President Vladimir Putin to look into "this complete nonsense."

"Jehovah's Witnesses are Christians, too, so I don't quite understand why persecute them," Putin said at a meeting with the Presidential Council for Human Rights in 2018.

Russian authorities turned up pressure on the group this year by adding over 200 Jehovah's Witnesses to a register of extremists and terrorists, effectively cutting them off from the country's financial system -- being on the list leads to one's bank accounts being frozen and to severe restrictions on any financial transactions.

Jarrod Lopes, a spokesman for the Jehovah's Witnesses world headquarters in the United States, said in a statement Friday that the group is "greatly disturbed" by reports of torture of their member. "It's difficult to comprehend that such barbarism persists in a modern country with a constitution that promises freedom of religion," Lopes said.