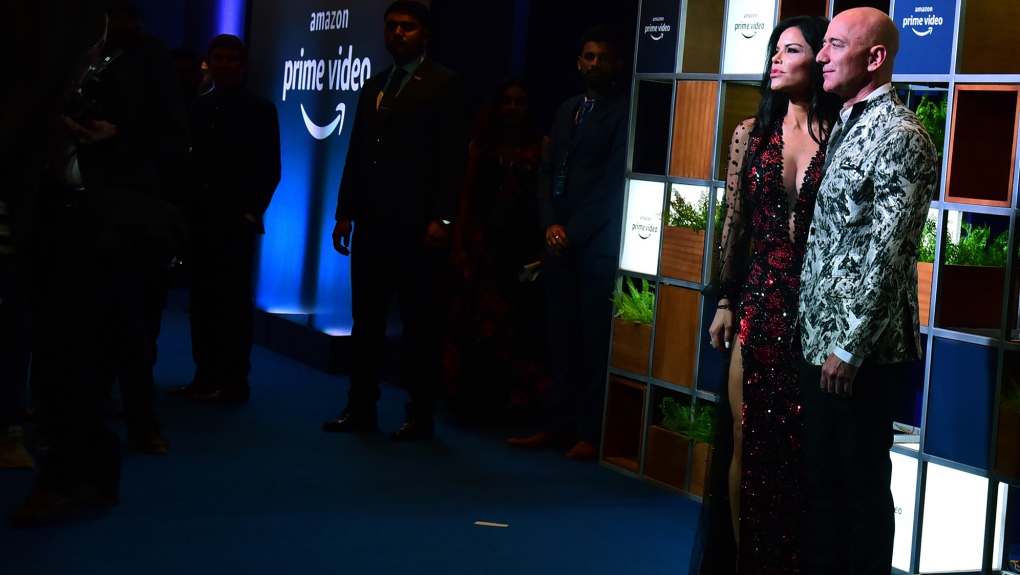 US prosecutors have obtained evidence indicating that Jeff Bezos' girlfriend, Lauren Sanchez, sent her brother text messages that were later published in the National Enquirer in its story about their affair, according to the Wall Street Journal. (CNN/Sujit Jaiswal/AFP/Getty Images)

NEW YORK -- Michael Sanchez, the brother of Jeff Bezos's girlfriend, is suing the Amazon founder for defamation, alleging that Bezos and his team falsely told reporters that Sanchez provided nude photos of Bezos to The National Enquirer.

In the complaint filed Friday night in Los Angeles, Sanchez, a Hollywood talent manager, says he has lost clients and has been shunned by family and friends. The lawsuit doesn't specify how much money he is seeking.

The lawsuit says Bezos began his affair with Sanchez's sister, Lauren, in 2017, when her production company was hired to do work for Bezos's space exploration company. The couple kept the relationship secret based on advice from a psychic in New Mexico, according to the complaint.

The lawsuit alleges that in 2018, Lauren Sanchez approached her brother, who was her manager at the time, about leaking information about the affair to gossip website TMZ as a way to get ahead of the media and limit any backlash.

Michael Sanchez says he advised his sister against the move but after quashing rumours about the affair by multiple tabloid reporters, he entered a deal with the publisher of The National Enquirer, in which he "agreed to corroborate the existence of the relationship under conditions that would help Mr. Sanchez manage the timing of the story and the way in which the affair was portrayed."

Shortly after the National Enquirer ran a story on the affair early last year, Bezos published a blog post alleging that the tabloid tried to blackmail him with embarrassing photos that he sent to Lauren Sanchez. He also suggested that the Enquirer had ties with Saudi Arabia, which was upset with coverage in The Washington Post, which Bezos owns. The Post had been harshly critical of the Saudi government after the killing of columnist and Saudi critic Jamal Khashoggi.

A lawyer for Bezos said his client will address Sanchez's lawsuit in court "very soon." In a prepared statement provided by her lawyer, Lauren Sanchez said her "family is hurting over this new baseless and untrue lawsuit, and we truly hope my brother finds peace."

Last month, two human rights experts at the United Nations said that Bezos's iPhone was likely hacked through a file sent from an account used by Saudi Crown Prince Mohammed bin Salman. But the U.N. experts did not tie the hack to the Enquirer. The experts called for an "immediate investigation" by the United States.

Michael Sanchez alleges in the lawsuit that Bezos and his security consultant, Gavin de Becker, spread false statements to reporters saying that he had provided the photos to the tabloid. Sanchez says he never had possession of the photos.

De Becker is listed as a defendant in the lawsuit. His security firm did not immediately respond to a request for comment Monday.