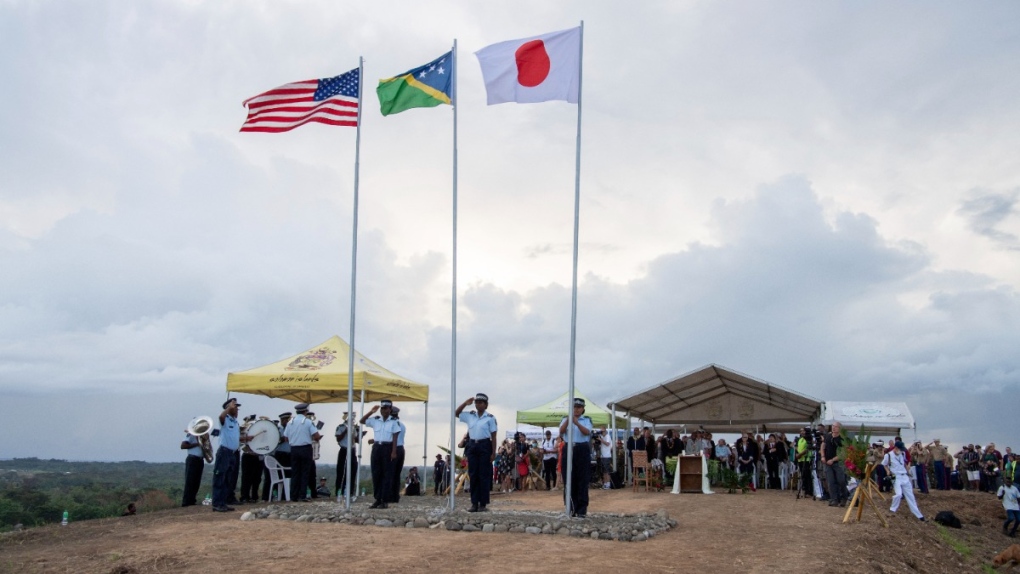 A dawn service at Bloody Ridge as part of commemorations to mark the 80th anniversary of the Battle of Guadalcanal near Honiara, Solomon Islands, on Aug. 8, 2022. (Petty Officer Chris Weissenborn/NZDF via AP)
WELLINGTON, New Zealand -

The U.S. deputy secretary of state said Monday the prime minister of the Solomon Islands "missed an important opportunity" by failing to attend a memorial service to mark the anniversary of a key Second World War battle, amid concerns the South Pacific island nation is building closer ties with China.

Wendy Sherman and U.S. Ambassador to Australia Caroline Kennedy were among dignitaries who attended a dawn service near the capital Honiara on Sunday to commemorate the Battle of Guadalcanal.

Sherman's father, Marine Mal Sherman, and Kennedy's father, the late President John F. Kennedy, almost died in fighting on the Solomons. Kennedy had been the commander of a patrol torpedo boat that was rammed and sunk by a Japanese destroyer. Sherman was wounded during the Guadalcanal campaign, which was the Japanese army's first defeat of the Second World War.

Local media reported that Prime Minister Manasseh Sogavare, who signed a security pact with China this year, appeared to have snubbed the ceremony, a claim his office later denied.

Sherman declined to say whether she considered the prime minister's absence a snub. She said Sogavare "will have to answer to his own citizens about why he made the choice that he did," in an apparent reference to the next election.

"I said to the prime minister directly that I was so sorry that obviously his schedule did not allow him to come because he missed an important opportunity," Sherman told Australian Broadcasting Corp.

"This was a place where international leaders gathered to say that the work with Solomon Islanders, at the time of World War II, was decisive in victory, in ensuring freedom and democracy. And so I really felt sorry for the prime minister because I think he missed an important opportunity," she added.

Sogavare denied a snub, telling the Solomons Star News newspaper in a statement that the government was well represented at all events over three days marking the anniversary at ministerial levels.

The statement said newspaper claims of a snub were misleading and lacked understanding of protocols applied at such events.

The pact with China has raised fears of a Chinese naval base being established within 2,000 kilometres (1,200 miles) of Australia's northeast coast. A Chinese military presence in the Solomons would put it not only on the doorstep of Australia and New Zealand but also in close proximity to Guam, the U.S. territory that hosts major military bases.

Both the Solomons and China have denied their pact will lead to a Chinese military foothold in the South Pacific.

Sherman said Sogavare had repeated the assurance during her recent visit that there would be no Chinese base.

"This is a situation where we will all watch very carefully to see what happens here. It is quite critical," Sherman said.

In April, a U.S. delegation to Honiara led by Kurt Campbell, the National Security Council Indo-Pacific co-ordinator, and Daniel Kritenbrink, the assistant secretary of state for East Asian and Pacific affairs, warned that the United States would take unspecified action against the Solomons should the agreement with China pose a threat to U.S. or allied interests.

Sogavare accused the U.S. and Australia of threatening and disrespectful behaviour.

China's growing influence in the Pacific has led the United States to commit to reopening an embassy in Honiara that it closed in 1993. Washington has also committed to opening embassies in Tonga and Kiribati, a Micronesian state that, like the Solomons, recently switched its allegiance from Taiwan to Beijing.

The Solomons ceremony that Sherman and Kennedy attended was briefly interrupted when an assailant armed with a pair of scissors attacked a Japanese sailor.

Radio New Zealand reported that the victim was part of a Japanese navy media team and was stabbed in the neck, receiving minor injuries.

The report quoted medics as saying the sailor required stitches but was doing well. Bloody Ridge community chief Wesley Ramo said the suspect was from a neighboring community and was under the influence and mentally unstable.

The suspect reportedly tackled the sailor to the ground during the attack before locals and U.S. military personnel stepped in and detained him. Police then took him away and the ceremony resumed after a short break.

'It came in straight through the master bedroom': Transport truck slams into home in Nanoose Bay, B.C.

A transport truck driver was airlifted to hospital Monday after his truck slammed through a home in Nanoose Bay, B.C., narrowly missing residents.