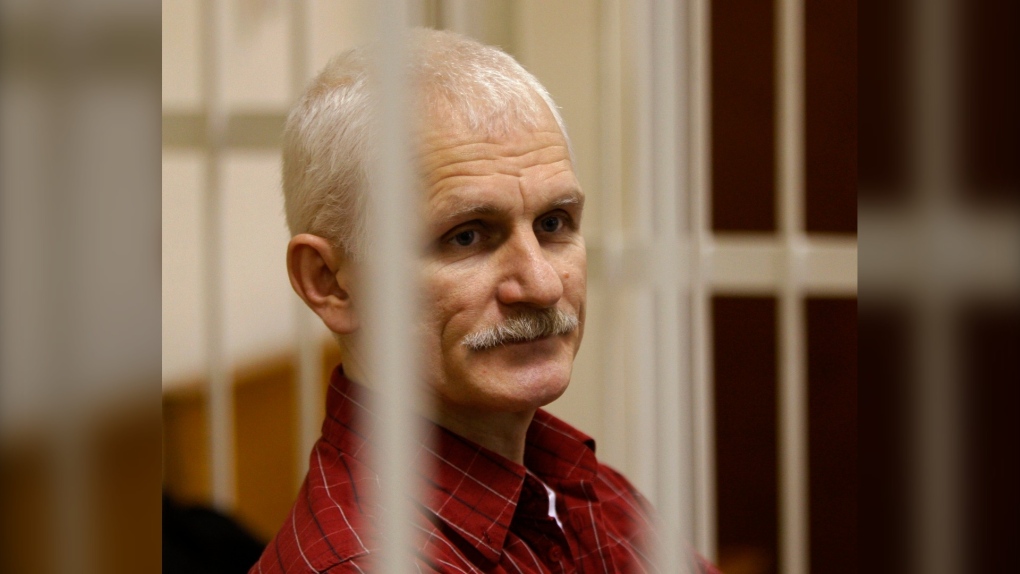 FILE - Ales Bialiatski, the head of Belarusian Viasna rights group, stands in a defendants' cage during a court session in Minsk, Belarus, on Nov. 2, 2011. Activist Ales Bialiatski, who shared the 2022 Nobel Peace Prize with human rights groups in Russia and Ukraine, is the fourth person in the 121-year history of the Nobel Prizes to receive the peace award while in prison or detention. (AP Photo/Sergei Grits, File)
TALLINN, Estonia -

Imprisoned Belarusian human rights campaigner Ales Bialiatski, who shared the Nobel Peace Prize with rights groups in Russia and Ukraine, hasn't been allowed by Belarus authorities to hand over his speech for the award ceremony, his wife said Thursday.

Natalia Pinchuk, who will deliver a speech on Bialiatski's behalf during Saturday's award ceremony in Oslo, said it will convey her husband's thoughts and statements.

"He has been unable to hand it over, the situation with letters is difficult, everything is closely monitored," she told The Associated Press in a phone interview while en route to the award ceremony in Oslo. "But we have his statements and his thoughts, and the speech will contain them."

Bialiatski, 60, who founded the non-governmental organization Human Rights Center Viasna, was detained following protests in 2020 against the re-election of Belarusian President Alexander Lukashenko. He has remained in jail pending trial and faces up to 12 years in prison if convicted.

United Nations spokesman Stephane Dujarric, asked for Secretary-General Antonio Guterres' reaction to Belarus not allowing the imprisoned Nobel laureate to give his speech to his wife, said: "We are strong believers in the right of freedom of expression, the right for people to be able to address who they want wherever they want."

Bialiatski is the fourth person in the 121-year history of the Nobel Prizes to receive the award while in prison or detention.

Pinchuk said that she was allowed only once to see her husband in custody since his arrest in July 2021. Prison guards were present during their meeting in late November at a jail in the Belarusian capital of Minsk.

"He made no complaints, showing his vigor and strength," she said.

Pinchuk noted that the Nobel award hasn't prevented Belarusian authorities from pressing charges against Bialiatski and raising pressure on his lawyers. She said that one of his lawyers already has been jailed and another has been stripped of his license.

Pinchuk said Bialiatski "was very much impressed" with being granted the prize, but "hasn't yet fully grasped it."

"He has faced strict limits on information he can send me, he can't write anything about domestic or foreign policy," she told the AP, noting that Bialiatski also has been banned from writing anything about his prison conditions, which she described as torturous

"Conditions are very harsh for both men and women, they could be compared to torture," she said.

"I hope that the Nobel prize will help draw attention to Belarus and those who are in prison," Pinchuk added.

Belarus was shaken by massive protests after the disputed August 2020 re-election of Lukashenko, which the opposition and the West denounced as a rigged sham. Authorities responded to the demonstrations with a massive crackdown that saw more than 35,000 people arrested and thousands beaten by police.