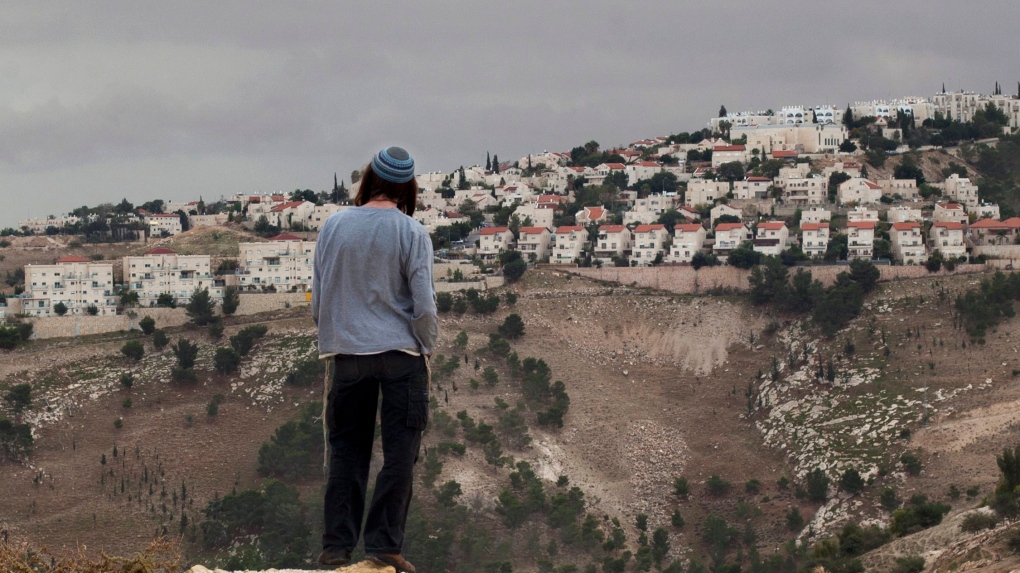 FILE - In this Dec. 5, 2012 file photo, a Jewish settler looks at the West bank settlement of Maaleh Adumim, from the E-1 area on the eastern outskirts of Jerusalem. West Bank settlement construction surged during the first year of the Trump presidency, an Israeli monitoring group said Sunday, releasing data that added to Palestinian mistrust of the American administration. Peace Now said that Israel began construction of 2,783 settlement homes in 2017. That was about 17 percent higher than the annual average since Prime Minister Benjamin Netanyahu took office in 2009. (AP Photo/Sebastian Scheiner, File)

Peace Now said that Israel began construction of 2,783 settlement homes in 2017. That was about 17 per cent higher than the annual average since Prime Minister Benjamin Netanyahu took office in 2009.

It said that 78 per cent of the new homes were in outlying settlements that would likely have to be evacuated if a Palestinian state is established. And 234 units, or 8 per cent, were in tiny outposts that are not even authorized by Israel, it said.

The Palestinians and most of the international community consider Israeli settlements to be illegal and obstacles to peace. Over 600,000 settlers now live in the West Bank and east Jerusalem, areas captured by Israel in the 1967 Mideast war and claimed by the Palestinians for their future state.

While a string of Republican and Democratic presidents have opposed settlement construction, Trump has taken a softer line. He has asked Israel to show restraint at times, but avoided the strong condemnations voiced by his predecessors. His Mideast peace team, led by his son in law Jared Kushner, is dominated by people with close ties to the settlement movement.

Peace Now said its data is collected through aerial surveys and inspections by monitors on the ground. In its report, Peace Now stopped short of blaming the jump in construction exclusively on White House policies.

Netanyahu has been a strong supporter of the settlements throughout his career, and his coalition is dominated by religious and nationalist hardliners aligned with the settlement movement and who oppose Palestinian independence. Facing a growing list of corruption investigations, Netanyahu has also appealed to his hard-line base.

"The steady pace of construction and building deep in the West Bank attest to Prime Minister Netanyahu's steadfast abetting of the settlement enterprise," the report said. "It is also apparent that the new U.S. presidency in 2017 had no marginal deterrent effect on these Israeli unilateral moves."

For the Palestinians, the Peace Now data was another cause for mistrust of the U.S. administration just as the White House is trying to wrap up a Mideast peace initiative.

The Palestinians have severed most contacts with the White House since Trump recognized Jerusalem as Israel's capital in December. The Palestinians view the move as being unfairly biased toward Israel on the most sensitive issue in the conflict, and have already rejected the U.S. peace plan before it has been made public.

Nabil Shaath, a top adviser to Palestinian President Mahmoud Abbas, said the figures proved that Netanyahu is "not interested in peace" and is destroying hopes for a two-state solution.

"Netanyahu is continuing his settlement project, enjoying the fact that the U.S. is silent," he said. "These numbers are very dangerous. We condemn it, and will continue working politically to stop it."

Both Netanyahu's office and the White House did not immediately respond to requests for comment.