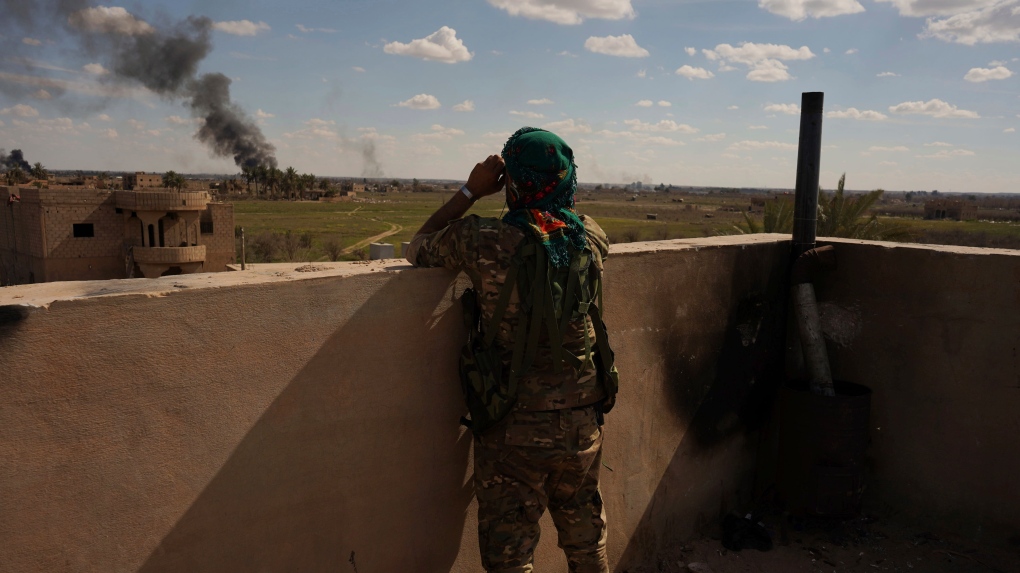 Benjamin Netanyahu's announcement came as the U.N. nuclear watchdog held a meeting in Vienna, where he's hoping the agency will take tougher action against Iran. It also came in the final stages of Israeli national elections, drawing criticism from opponents that the sudden press conference was a campaign stunt.

Speaking to reporters, Netanyahu said Israel discovered the facility, located in the central Iranian town of Abadeh, using information gathered in a trove of documents Israeli agents stole from an Iranian warehouse and made public early last year.

He provided no details or evidence of what those experiments were, but he showed off two satellite photos. The first, taken in June, showed the facility intact. The second, taken in July, showed parts of the building had been destroyed, in what he said was an Iranian coverup after Israel discovered the facility.

Israel considers Iran to be its greatest enemy, and Netanyahu has been a leading opponent to the international nuclear deal with Iran. He says that Iran is trying to build a nuclear bomb, a charge it denies, and has accused the Iranians of violating provisions of the agreement.

In the first response from Tehran, Iranian Foreign Minister Mohammad Javad Zarif posted on Twitter a 2002 video of Netanyahu speaking about what he saw as the "positive reverberations" that would come with the overthrow of the late Iraqi dictator Saddam Hussein.

Zarif did not address what the Iranian site was, nor why it appeared to be demolished in Netanyahu's presentation.

Abadeh is a small city famous for its carpets located some 500 kilometres (300 miles) southeast of Tehran, Iran's capital.

There has been a longtime airport project planned for the area that authorities broke ground on in 1995. At one point, officials suggested it could become an air defence base. However, there's been no major development at the site.

GPS co-ordinates offered by Netanyahu did correspond to a set of buildings located in the hills north of Abadeh, according to commercially available satellite images. However, their purpose could not be immediately determined.

Last year, President Donald Trump withdrew the U.S. from the nuclear agreement and re-imposed sanctions on Iran. The deal has steadily unraveled since then, and caused tensions to heighten across the Persian Gulf and broader Middle East.

Those tensions have spilled over into fighting between Israel and Iran and its Shiite allies in Lebanon and Syria. Earlier Monday, Israel said that Iranian-backed Shiite militants in Syria failed in an attempt to fire rockets into Israel, while the Lebanese militant group Hezbollah said it shot down an Israeli drone in Lebanese airspace.

The International Atomic Energy Agency, the U.N. nuclear watchdog, has said for years that Iran halted organized efforts at exploring a possible nuclear weapons in 2003. U.S. intelligence officials similarly have made the same conclusion.

In Vienna, the IAEA confirmed Monday that Iran is preparing to use more advanced centrifuges, another breach of limits set in the unraveling nuclear deal. Iran had already announced the step, its latest violation of the 2015 agreement as it tries to pressure European signatories to find a way to maintain oil shipments and ease the toll of U.S. sanctions on the Iranian economy.

Netanyahu's announcement also provided a distraction from Israel's heated election campaign. Israel is holding a do-over election on Sept. 17 after Netanyahu failed to secure a parliamentary majority in April elections.

Netanyahu has tried to keep the campaign focused on issues of national security, which is considered one of his strengths, and away from a looming corruption case against him.

One of his main rivals, Blue and White party candidate Yair Lapid, accused Netanyahu on Twitter of using the Iran expose as "election propaganda at the expense of security."